08/16/2011|Lewis B|Editorials9
Home » Home » Editorials » Sylvari: Gender Defined
Sylvari week has ended and for those of you who haven’t yet delved into the delights offered by ArenaNet, I suggest you head on over to the blog for a five day feast of information covering the design and lore, plus  some delicious wallpapers. The redesign has been well received by both press and fans and it was unquestionably brave of ArenaNet to redesign an entire race so deep into the development cycle. And yet looking back over the blog with a fresh pair of eyes, I can’t help but wonder whether they’ve just missed out, by a whisker, on what could have been something truly unique…

Unquestionably, the original Sylvari were lacking in identity. An elf with leaves is all that many considered them to be, with far too many comparisons drawn from other races in less stylistic games or fantasy worlds. Whilst Kristen Perry has clearly made great efforts to justify her approach, I wince a little when it is suggested that the Sylvari are entirely unique, not just to Guild Wars, but to the fantasy universe as a whole.

It is quite the proposal and though Tolkien can lay claim to pioneering Elves and Orcs, to suggest that the Sylvari will become synonymous to fantasy as much as Faeries or Ents isn’t impossible, but certainly not probable. Irrespective (and I don’t believe for a moment ArenaNet ever sought to have the Sylvari ingrained into universal role-play lore), I consider that the Sylvari will always be considered ‘green elves’ by those unfamiliar with ArenaNet’s approach and thought process.

It is understandably difficult to tread the line between something anatomically human whilst dipping into influences of Ents and Fae and all the while trying to remain truly original, without too greater influence from either source. To a large degree ArenaNet have achieved this, with the flow of plants and leaves spanning the bodies of Sylvari delicately and with perfect integration. My problem though, lies in one factor; gender and sex.

Were ArenaNet to truly challenge the status quo of fantasy design, the possibility to create a sexless race was never more present than here. Born from the pale tree as plants, the concept that they could have been entirely neutral beings, without gender identifiable anatomy, would have opened up odd yet unique possibilities.

Without doubt this would have been entirely uncomfortable for many. From my experience in massively multiplayer games, many people enjoy aligning their characters with their own sex and yet some (myself included) often play female avatars (and visa versa) to the curiosity of others. But to remove gender entirely and for the player to be greeted by a single “create Sylvari” option, for them then to define their appearance without a gender template to work from, would have been something traditionally unheard of.

For example, whilst many men may have created a Sylvari of a distinct height and weight and with dark bark to reflect their masculinity, there would have been an inevitable pause where they questioned their own thoughts on appearance and the perception of gender. The grey areas of androgyny that this may have created and the spectrum of character creations would have opened up entirely new prospects of lore and role play opportunities. This would pose new questions about how we approach our character in an online universe and how we want people to perceive us as individuals. I expect people will ask “if you can create what appears to be a male Sylvari, why not just have selectable genders?” and the question is more than valid, but whether you align yourself to a masculine, feminine or neutral appearance as a result of your characters customisation, you could never say you are truly male or female, just Sylvari. 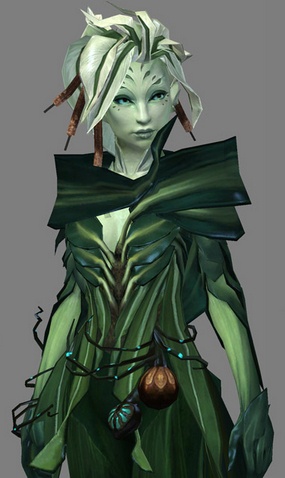 The conceptualised image of Caithe realised in 3D is a great example of the topic I’m discussing, as she could so easily be categorised as androgynous were you to not know her gender. Many will surely disagree, stating she is so clearly female and yet if her breasts were hidden (as the obvious indicator) she could so easily pass for a young, delicate male.

Films such as Mulan, Boys Don’t Cry and Pitch Black highlight the prominence gender plays and all three to a certain extent explore the difficulties caused by those wishing to no longer be defined by the body they were born with, as the films pose questions and push barriers in how we perceive a person’s gender and their roles.

Many outside of videogames may be surprised at the reaction of some male players when they realize that the female avatar they are playing alongside is in actual fact female. Should it matter in any way whether the person behind an avatar is the same sex? Absolutely not, but why is it that people react this way? There is sadly no simple answer, but much inevitably depends on stereotypes and preconceived ideas we all have about those around us, with gender often at the forefront of such ideas. Fundamentally though, would all this serve a purpose? Would removing sex from a single race have any impact on Guild Wars 2 or the wider gaming scene?

Controversy aside, I think so. Some of the greatest stories told are those which challenge our preconceptions and ideals and though to many this will be a taboo subject, and although the risk for ArenaNet is undoubtedly too great for what is a commercial product, the possibilities from a lore standpoint alone and the opportunity to be truly unique, without fear of being pre-judged as a player, is surely priceless in a genre where originality and individuality is hard to come by.

History in the Making — An Elder Scrolls Retrospective