Face Noir is an Italian game by the developers Mad Orange, translated to English and released this month by Phoenix Online Studios. I’m on Phoenix’s mailing list, since I’ve been following their Erica Reed series as new installments arrive. So I also took interest in Face Noir, as another game in the same genre that was championed by the same developer. A murder mystery set in Depression-era New York City, I saw some promise that this Italian immigrant might spin an interesting murder mystery yarn.

Sadly, the function of Face Noir seems to be mostly to make me appreciate all the other point-and-click adventure games I’ve recently played. It’s always hard for a game to grab me if the protagonist seems bland. And Face Noir’s protagonist, detective Jack Del Nero, has me really pining for the sonorous delivery of a Horatio or the smart-alek determination of an Erica Reed. 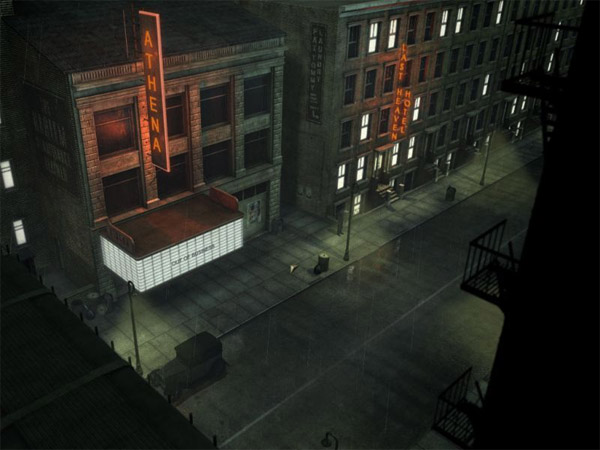 Private Dick Jack has the standard noir hero flaws: he’s poor, he’s unlucky in love, and he’s a hard drinker. An NPC calls him a “semi-alcoholic,” but, from the way he discusses the whiskey rolling down his throat, he’s just an alcoholic. That would be a very suitable noir-detective flaw, but nobody in the game bothers to mention that Prohibition only ended a few months ago. Since the game goes out of its way to paint Jack as a law-abiding citizen who only breaks the rules when no other option is available, I can’t help but wonder where he was getting all his hooch in the years before the game’s story begins.

Jack is supposed to be an Italian immigrant to New York City, which you can get from his surname, and the fact that he swears in Italian. Aside from that, though, there’s no accent in his voice, which may be a result of translating Italian dialog into English voice acting. This would be fine, except other actors are definitely using accents, including a Jack’s Irish former partner, and a “Chinese” cab driver who is clearly designed to be comic relief. The cabbie turns out to be possibly the only memorable character in the game, but not really in a good way. An exaggerated vocal performance is one thing, but when the subtitles are also replacing “Rs” with “Ws,” it goes over the line into a racist caricature. 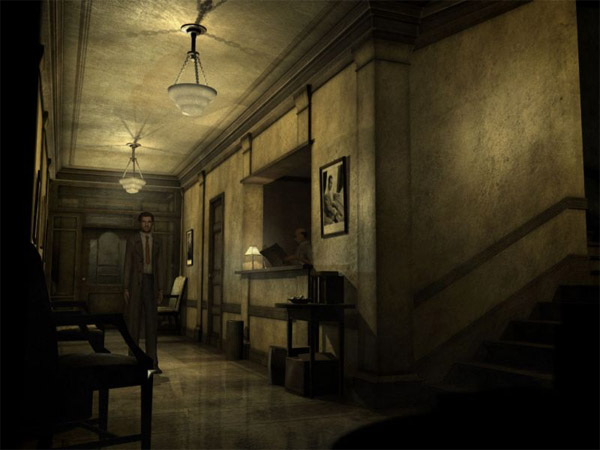 The flatness of the writing can’t entirely be blamed on the translation team, but something less literal in that department might’ve given it some pep. The story is really the standard murder-mystery with-a-conspiracy-twist. There’s also a little girl you have to look after for a while, because it’s the twenty-teens and that’s how video games go now. Most of the dialogue in Face Noir is strictly expository: “who is this person, where are they now,” sort of stuff. Apparently the name “Face Noir” actually refers to a subset of the noir detective genre, but it’s an appropriate name for a game where a large portion of the action consists of staring at talking heads. I heard one or two actors who did pretty well with the material, but most of the cast can’t really rise above it.

The lackluster voice work is a shame partially because the ambient audio is so fantastic. Smooth, relaxing jazz set to the sound of rain provides the backdrop for most of your adventure. The occasional well-timed foghorn, auto engine, or ringing telephone provides the rest of the ambiance. It’s really well done. I’d probably leave the game running at home just to fall asleep to it.

Puzzles in the game generally don’t require grand logical leaps, but are linear in a way that can lead to frustration. Jack carries a set of lockpicks, but he won’t pick open a lock unless he thinks he has a good reason. A lock that seemed unpickable earlier he might happily pick when he later feels it’s worth it. Jack also won’t dig around in certain spots until there’s something he knows he needs that might be in there. That means that clicking on a trash can can yield no useful results five times, but when a particular puzzle requires what was in that trash, only then will Jack actually find it. This is not a good puzzle innovation. Puzzles that involve direct manipulation of close-up objects are a little better, but are sometimes fiddly. There’s also detective deduction puzzles, which usually take place during conversations and require Jack to match up two facts he heard earlier to come to a new conclusion. 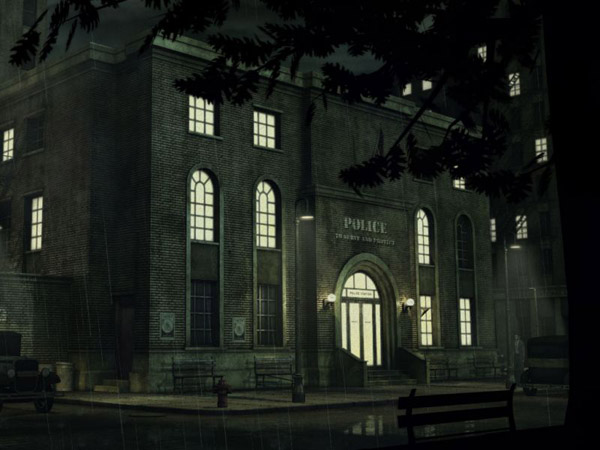 The most interesting thing about the game turns out to be its setting. This is not because the New York Noir setting is, in and of itself, fantastic, but because it’s seen through the filter of Italian developers and it makes the whole thing a little off-kilter. The police station where I go to check records, for example, is in Hoboken, which is actually in Jersey City across the water, and I’m not sure why they made this decision. At one point I also opened a door with a keycard, and I’m not sure that was a thing in the 1930s (though, to the game’s credit, it’s a paper punchcard rather than any kind of electronic one). There’s some ongoing conversations about immigration and race relations and though I can’t speak with any expertise about how accurate this is in the lens of history, the outside point of view of our country’s history is interesting all by itself. The environmental art is also quite lovely. The grand camera angles can sometimes lead to a little pixel-hunting, but pressing F1 on the keyboard highlights interactable objects in an unobtrusive way.

If you play just one noir-inspired point-and-click detective adventure game this year, make it Deirdra Kiai’s Dominique Pamplemousse, which by virtue of lampooning noir stories hits all the same narrative notes that Face Noir hits, but in full song with claymation. It’s not that I wouldn’t recommend Face Noir to a hardcore fan of the genre. There’s just a lot better that’s floating around out there right now in adventure game land, and despite a layer of modern polish and some pretty good art and sound design it doesn’t add a lot for the English-speaking audience. As the game originated for Italian and German-speakers first, it’s possible it played a bit better overseas. For this fault I can only blame the wealth of American adventure games which has these past years been falling into my lap.

The Often of Action