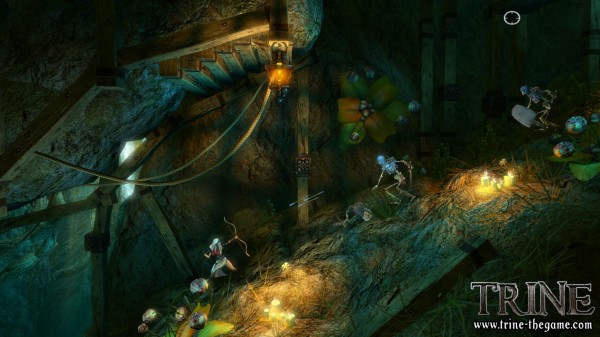 Has anyone heard of Trine or tried out the demo? Developed by Frozenbyte, Trine is billed as a physics-based, action/puzzle platformer with three different swap-able player characters  – Wizard, Thief, Knight – who each have specific abilities to help you solve puzzles and defeat the undead that populate the game world. The wizard can create objects out of thin air, the thief is agile and can latch onto solid objects and the knight is a tank. Trine is an amazingly scrumptious feast for the eyes. I want to live in that world…well, except for the critters trying to kill me.

I was so enamored of the trailer, I created a Steam account to download and play the demo. Alas, the game spit on my video card (which I suspected it would) and I couldn’t get past the opening cinematic. Color me sad. So, now I need to live vicariously through someone else’s experience with the demo. Help a girl out! Is it worth plunking down the $$ for a PS3? So far, no other game – except Last Guardian – even comes close to making me want to buy a PS3. Here’s hoping the rumored price drop is more than just a rumor.

Trine is currently available, for a few pieces of silver, as a download on Steam and the PlayStation Network.

Update: According to Joystiq, Atlus will publish the XBLA version later this year. I want to marry Atlus!

11 Responses to Trine for a Trio