Welcome to Dragon’s Dogma! In this demo, you

Thank you for playing the Dragon’s Dogma demo.

Which is about how long the demo is.

I’ve semi-had my eye on Capcom’s upcoming Dragon’s Dogma because its open-world-fantasy style (plus the promise of supposedly cool melee combat from some of the people who brought us Devil May Cry) reminded me a bit of the Souls games, except maybe less bleak and less hard. And say what you will about the Souls games, but the third person fantasy hack-and-slashery is pretty awesome no matter who you are. So I figured, “Hey! Steerpike! Maybe this will be another game similar to that.”

I’d hoped the demo would answer this question, but the demo is eleven seconds long. 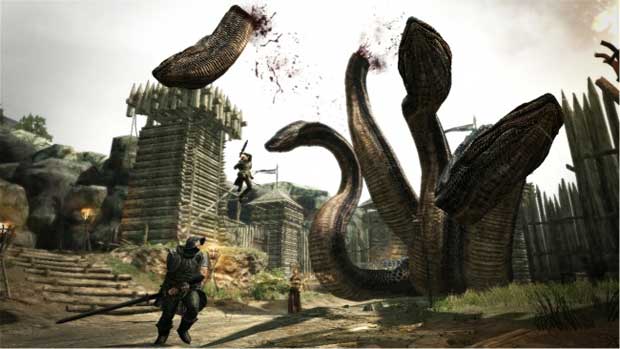 "Grawr! Rrrraaaarrr-GURK. Dammit! Seriously, asshole. That was my Polite Head! How am I supposed to meet my girlfriend's parents now?"

In Dragon’s Dogma, there is a dragon. Though they call it a “Wyrm.” And I guess the dragon has a philosophy of some sort. A dogma, if you will. That wasn’t really made clear, but I’m guessing.

I’d love to actually have some impressions about Dragon’s Dogma, but that’s hard because you’ll finish the demo in less time than it takes a trained crew at McDonald’s to whip up a Quarter Pounder meal, stuff it into a bag, and fling it out the drive-through window at your car. The two “quests” included with the demo, along with the character editor, are enough to tell me exactly one thing:

Based on the demo I have no idea if I want to buy this game. 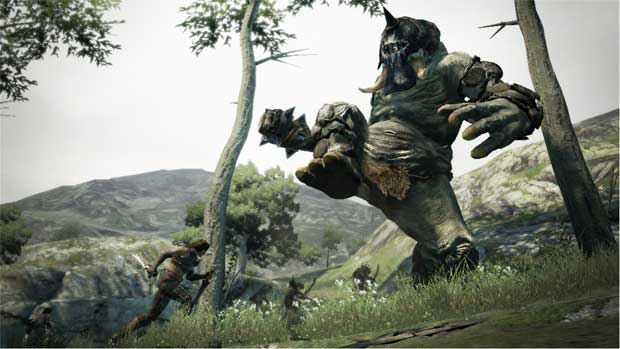 "It's just a jump to the left... then a step to the riiiiiiight! Put your hands on your hips... bring your kne--OH GOD WHY ARE YOU STABBING ME?"

What’s with me and all the food metaphors? I must be hungry.

Dragon’s Dogma has a fair bit of promise, though some earlier previews warned of shoddy controls and an uncomfortable camera, both of which I did manage to experience in the microseconds between “Push START to begin” and “Push START to exit.”

On the other hand, there was some coolness too. You can clamber up onto larger foes, Shadow of the Colossus-style, and hack away at them while they try to shake you off. And I remain intrigued by the “Pawn” system, which is basically a glorified party-making tool: you create these NPC pawns that fight at your side, but you can also swap them online and level them up in multiplayer. 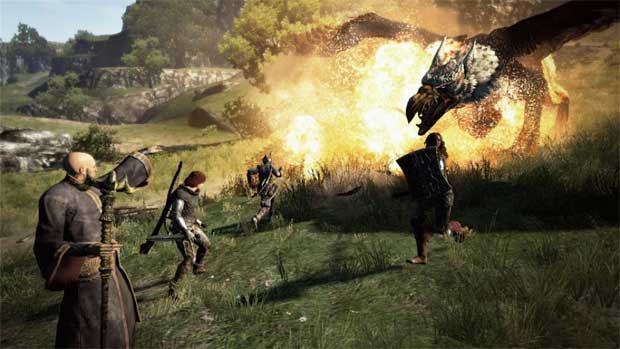 "Hello! Only you can prevent forest firAAAAAAAUUUUGGH HELP HELP PUT ME OUT!"

Controls-wise, I can’t say they’re difficult, just that I’m still used to the Dark Souls controls and Dogma’s aren’t the same. I was displeased to see the number of buttons involved in combo construction, particularly since combos don’t seem to be that much a part of the battle system; more concerning was the game’s camera, which while far from the worst I’ve ever seen seems trammeled by design: the demo’s first nine (of eleven) seconds take place in narrow corridors that don’t seem to suit Dogma’s style. Later on you get to go outside for two seconds to fight a griffin, where the camera seemed more at ease, but the premade archer template suffered at the hands of the controls.

My impressions? I have none. This sad non-demo gave me essentially no information at all. I know about Dragon’s Dogma now exactly what I knew before I played the demo: that it exists, that it involves a dragon with a worldview, and that it’ll be out for finer consoles on May 22.

The 3DS Is Doomed