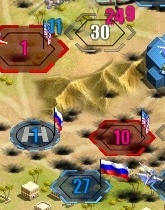 “Modern Conflict HD certainly isn’t the RTS experience that many will see as the perfect fit for the iPad’s gorgeous 9.7″ multi-touch display. The simplistic gameplay and lack of true tactical depth will leave enthusiasts of the genre disappointed, while the omission of a multiplayer component does seem like something of a missed opportunity”

As much as I love Apple’s App Store, I don’t trust it. Sure, I love the fact that I can pick up all manner of useful applications and fart buttons for my iDevices, but trust? Certainly not.

To be specific, perhaps it’s not the App Store itself that I find myself weary of as much as it is the naming conventions of those who flog their wares through Apple’s digital service. For every well thought out or original piece of content on the App Store, there are another 10 applications that are named with the specific aim of attracting attention by riding on the coat tails of an already successful product. “Modern Combat” this and “Doodle” that. As a general rule, I personally tend to stay away from such crudely and obviously named titles as much as possible. However, whether through oversight or simply the continuing quest to try and find a decent iPad game that isn’t overpriced or Plants vs Zombies, I recently found myself downloading a game entitled Modern Conflict HD.

Although I resent the Modern Warfare style name and the ridiculous use of the HD moniker (a trend for iPad apps, despite being a device which doesn’t actually support a HD output. Go figure), Modern Conflict HD is a fine if a little lacking early example of competent gameplay on the iPad. Simple, accessible and no nonsense, but in this case, perhaps slightly overly so.

As the commander of an American, Chinese or Russian army across 3 campaigns, each with their own rather meaningless and generic war based sub-plots, the sole objective of Modern Conflict HD is to own every base on the map before the A.I forces do, thus winning the battle and moving on to the next generic and bland mission. Unlike a traditional RTS game such as Command and Conquer, bases themselves come in just a handful of flavors – ranging from the fortified to the, well, unfortified – and each base is connected to the next by a network of roads. Every base captured will generate either tank or helicopter units which are represented by a numerical figure. To cut a long story short, the higher the number on any given base, the more firepower you have at your disposal to move from that position and assault the enemy.

Essentially, everything that plays out beyond this point boils down to little more than moving numbers around a screen. Move 50 units from one of your own positions to an enemy outpost only containing 10, and you’ll take that base from the enemy with only minimal casualties. Although there are some caveats to how effective some units are, such as helicopters being less effective against tank bases and vice versa, or assaulting fortified positions resulting in more casualties, the general gist of the gameplay never strays much further from this rather simple format. 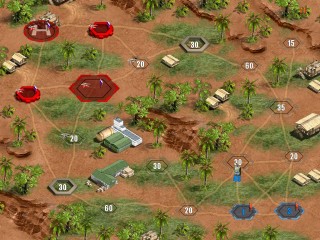 This is just about as complex as Modern Conflict HD gets.

To be fair to Modern Conflict HD, it’s a format which generally works. Although incredibly simple to get to grips with, moving your units across different areas of the pre-determined game map does require some degree of tactical thinking. Assaulting an enemy outpost with only a modest number of units can result in heavy losses, which will then leave your own bases vulnerable to a counter attack. Lose too many positions in this manner and you can quickly find yourself penned into a corner, frantically shifting units around to regroup or redeploy for an assault elsewhere.

Unfortunately however, the A.I can prove to be rather erratic and this can leave some of the challenge feeling a little cheap. Although the earlier levels will see the A.I launching meager numbers of units at you, leaving you free to exploit and capture their bases in return, later levels can stack the odds firmly against your favor. In a later level during the Chinese campaign, the A.I launched 2 waves of 300 tank units in a last ditch attempt to save the battle, numbers I died multiple times trying to defend myself against without success, despite being in control of every other base on the map.

Modern Conflict HD certainly isn’t the RTS experience that many will see as the perfect fit for the iPad’s gorgeous 9.7″ multi-touch display. The simplistic gameplay and lack of true tactical depth will leave enthusiasts of the genre disappointed, while the omission of a multiplayer component does seem like something of a missed opportunity. For anyone who finds the more casual approach to the war based strategy sim endearing, Spec Op’s and Survival missions extend the gameplay beyond the 3 single player campaigns, representing a fair level of value and content for the relatively modest price of entry. Despite being an overly dumbed down take on the genre, I found Modern Conflict HD to be one of the more enjoyable and worthwhile time killers available for the iPad so far, and the game is a relatively easy one to recommend on that basis. However, for those who are still waiting for developers to unlock the iPad’s full potential for this type of gameplay experience, the wait continues.