Microsoft have gone announcement mad, ladies and gentlemen. Having officially unveiled and named Kinect as a live and working (well, sort of) consumer product at this years E3 conference in June, the company have finally made their intentions clear with regards to pricing. I’m sure Microsoft’s PR department would like you to be surprised by the official $149 price tag, although in typical fashion, every retailer in America has already leaked this figure at some point over the last month. Still, it’s nice to see such issues settled officially by Steve Ballmer and chums.

Well, it’s kinda nice. How about that price, folks? What does a $149 accessory do for you more than mid way through a consoles projected life cycle? At £129.99 in the UK, that’s some considerable margin more than I’d feel comfortable with, missing the sub £100 “sweet spot” that might have proven more of a temptation. Or at least a temptation had there been anything about Kinect’s launch range that I found even remotely interesting.

Contrary to rumour however, Microsoft will be including a launch title with every Kinect sold. As someone who believes that Wii Sports – the free game bundled with every Wii ever sold – was probably the most important piece of software ever to grace the system, I was prepared to blow a gasket when it transpired that Microsoft might not follow suit. By including a free copy of Kinect Adventures, early adopters should at least have something to get their waving arms and legs into at launch.

Also announced today was a new Xbox 360 SKU, which looks set to replace the existing “Arcade” models. Sporting the same looks as the freshly redesigned Xbox 360 S, the new console will come with a matte finish as appose to the glossy exterior of the 250GB flavored unit, along with a built in 4GB HDD. Like the standard console, the Arcade replacement will also feature built in Wi-Fi, a HDD expansion bay and “whisper quiet” noise levels. At $200/£149.99, this strikes me as a significantly better value entry package for new consumers. The new SKU will also be bundled with Kinect for $300/£250, offering a slender saving on the stand alone price of the motion camera.

For anyone looking to invest in an Xbox 360 any time soon, I’d find the new entry level unit incredibly easy to recommend, but at not much less than the cost of the console itself, this is still a no sale from me as far as Kinect goes. Opinions welcome as always. 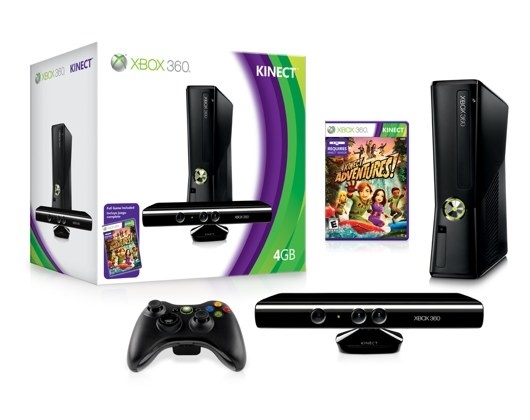 9 Responses to Kinect Priced, New 360 Bundles on the Way