Sometimes a small game company will contact me directly asking for a Tap-Repeatedly review of their product. Often I reply to them, and say I’ll look in to it, but then don’t post a review. This is nothing personal. I meant well, and so did you. But one of two things happened:

One. Your game was terrible. Reviewing the game would have given me a moderate amount of wicked amusement, but would not have been good for you.  I am ultimately too nice to turn your heart’s work in to the next Big Rigs, positioned solely for the internet to mock.

Two. Your game didn’t work. Maybe it was location-based, and I could never get it to recognize my location. Or maybe the darn thing just didn’t load. At any rate, I tried, but then other games turned out to be more interesting than your broken one.

Happily, neither of these things are true of Boomblastica, the indie schmup sent along to me this week by Thrust Interactive. It’s not terrible, and it does work! Boomblastica Devs: feel free to use that as your pullquote. 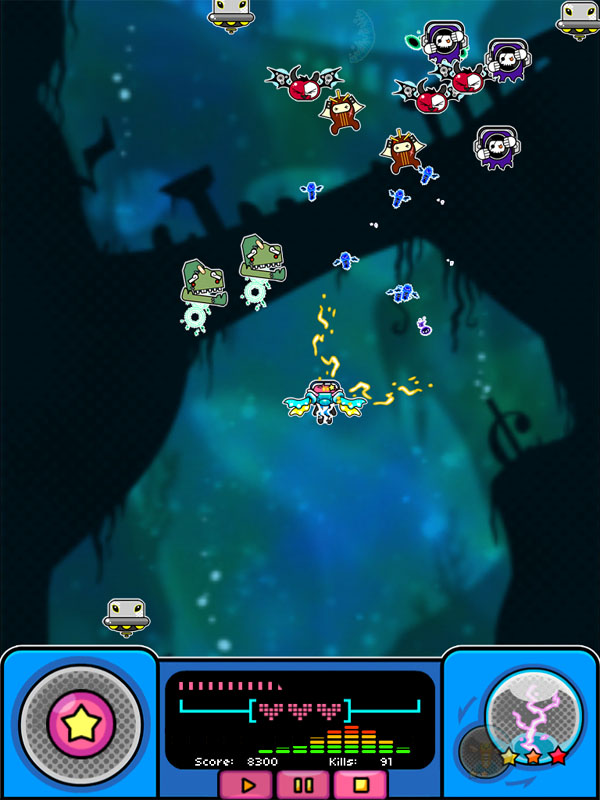 Boomblastica is a lighthearted, bright-colored, music-focused action game for mobile devices. It’s available in the iPhone app store, and the Droid Marketplace. The game itself is a free download, with additional levels for a small price if the game happens to grab you.

I’m playing Boomblastica on a Motorola Droid X, running Android OS version 2.3.3. This may not be ideal: more on that later. But it seems as if lots of indie developers are targeting mobile devices these days, so, it’s important for them to remember that while most people have some sort of smartphone, not everybody has an iDevice of some kind. I don’t, so I appreciate that Boomblastica also runs on the Droid. (Another thing that happens, see, is people send me iPhone apps to review, and I can’t.)

The PR copy for Boomblastica describes it as “retro.” I wouldn’t call that entirely accurate. One might think of the game type as retro, but Boomblastica is obviously modern, with a clean, slick graphical look and a brilliant color palette. The game’s protagonist is a typical choice for this style of game: a pink-haired magical girl who fires bees from her fingers.  She flies through a gauntlet of killer clouds, bubbles, bats, and other adorable evil creatures. 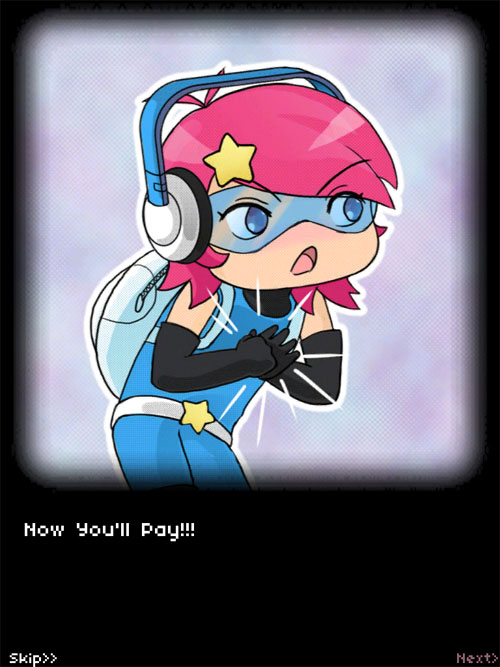 Boomblastica isn’t exactly a “bullet hell” game, though it apes the style of those games. To play Boomblastica, you drive a small craft through a series of animated obstacles, and fight lots of bosses, which you shoot with a variety of weapons: so far, so good. What mainly makes it different from a basic bullet hell game is your magical girl is actually somewhat durable. Instead of being able to take only one shot, she has a life bar, which allows her to absorb multiple hits before she inevitably explodes in to clouds of pink electric sugar. That, combined with the fact that you can shoot at the bullets that are shooting at you, makes it feel a little more forgiving than hardcore schmups like Touhou Project or Jamestown. It’s an adjustment that’s necessary, given the platform it’s played on.

You can control your magical girl one of two ways: either with a small joypad in the bottom-left of the touchscreen, or by dragging her around the screen directly. She’ll eventually catch up to your finger, once you get used to the way she handles. Unfortunately, neither of these methods are ideal on the smartphone. With the in-screen joypad, it’s hard sometimes to tell exactly where I’ll end up. But with direct control, my fat little finger is covering the character, and I can’t see her. More crucially, I can’t see things that are about to hit her. I found myself favoring direct control most of the time, for precision, but I wished my finger was transparent so I could know if I was about to dodge a bullet or not.

Another downside of playing this game on the small screen is that the text is very small. This is particularly a problem for the text that explains how to play the game. It’s also a problem for things like the pause button at the bottom, which is so tiny that it often took me a couple tries to hit it properly. 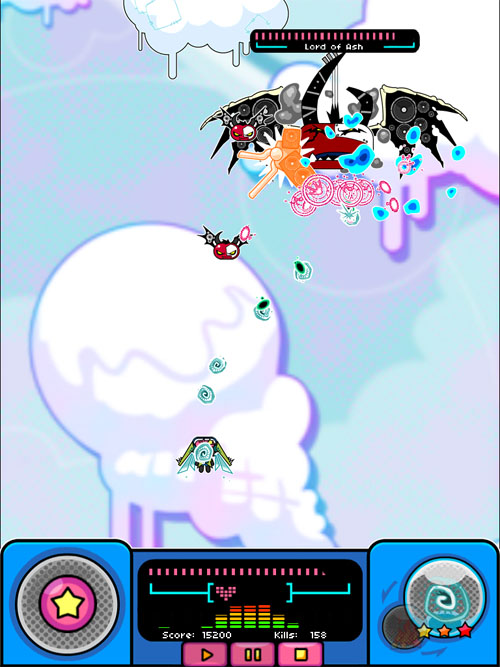 In a game like this, sound tends to either be an afterthought, or worked in as a larger part of the game’s premise. Boomblastica falls in to the latter category, which levels referred to as “tracks” and boss battles with menacing DJs. Each level is a different techno-pop song, and the weapons you choose to fire change the backbeat of the music in different ways. I thought this was a fantastic touch, and would sometimes switch weapons just to hear a particular soundtrack again. If you’re playing a game like this on the subway, though, great sound design may not be part of your priorities. And it might frustrate you that a weapon’s rate of fire is dependant solely on how well it matches the music track. Also, the music gets stuck in your head! This last thing could be a positive or negative.

I’m not an expert on the schmup-style game, but, because I’m a Journalist, and I have access to Communites, I enlisted my Touhou-loving friend to see what he thought about this title. After watching him play, I got the feeling Boomblastica is just not tuned for experts. He said he would’ve liked for the main character’s starter gun to be more satisfyingly powerful, and for the enemy shot groupings to be closer. Mostly, the touchscreen format is the problem here, because it doesn’t allow for the kind of control necessary for the “bullet grazing” antics most hardcore schmups are known for.

Although I don’t own an iPad, if I did, I would probably say that is the place to download this game. A larger screen size would probably fix the game’s issues with control and text size. And the laid-back, “on your couch” approach of the iPad versus the “on the go” qualities of a mobile phone would mean that the game’s art and sound design get the proper chance to stand out. On the smaller screen of the Droid, though, I can’t see that it will be my favorite.

On the other hand, “free” is a good price point. So there’s not much downside, other than the download time. If you’re looking for a little action on your mobile device, and dig a bubblegum beat, Boomblastica is worth a try. Just be prepared to curse your chubby fingers.