In Part Two of my PAX East 2016 report, I’m talking about the games I played in VR. VR is a huge trend in game development this year and I think it’s going to be present at a lot of events from here on out. I’ve experienced multiple different VR devices now, though the PAX demos I played focused either on the Oculus Rift or Samsung Gear VR.

In this post: Hitman GO VR, Stage Presence, I Expect You To Die, and Orion Trail VR.

Hitman GO is a mobile game version of Hitman, simplified down to its essence and re-imagined as a turn-based board game. Hitman GO has been out for a while, but I’m a little chagrinned to say that I had never played it… until I got to PAX East, and had the opportunity to try Hitman GO VR, a version upcoming this May for the Gear and Rift.

No need to use twitch or stealth skills here: this is a turn-based puzzle game where your Hitman is just a plastic game piece on a virtual puzzle board. You “attack” pieces by sliding toward them, but you can only do so if the piece is facing away from you. It’s like a stealth assassination game, but with the problems of execution fiddliness removed and all the focus put on positioning puzzles. In VR, Hitman GO puts a game board in your field of vision, letting you turn and spin, zoom in and out, and marvel at the up-close detail of individual pieces as you slide your little Agent 47 piece across the board.

Playing a touch-screen game in VR seemed like an odd fit at first, but I have to say that this was a super fun experience. The idea of playing a board game in VR is really appealing, and I can see myself picking this up for Gear myself so I can sit around and play it at home. There’s something very tactile about the pieces in this game that makes them seem very touchable when they are up close, and most of the little boards are surrounded by soothing virtual environments. It’s like playing with a virtual dollhouse. On the other hand, it might just be worth it to get the tablet version of this game first, so I can also play it on the train. It’s still kind of awkward to play VR on the train, and the game itself is suitable to be played, well, on the go. 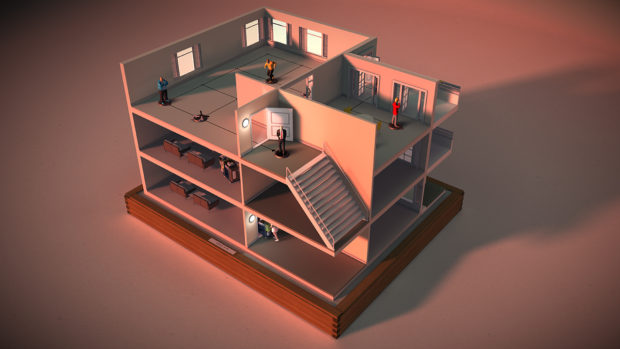 Stage Presence is another game I checked out in the booth for TinyBuild – their first VR experience. In this game, you’re stuck up on stage with a microphone… a real mike was of course provided. Your task is to keep the crowd in front of you awake and energized… but you have no other instructions, so you’re basically left to ad lib. In other words, it’s a nightmare made real: enjoy!

There’s only a minute that you have to kill in the demo, but it feels like a long time when you have to energize a hostile crowd, and I found myself often glancing up at the clock. If the crowd isn’t enthusiastic, they’ll boo and throw things, but if they’re still engaged, they’ll cheer. The amount of audience engagement seems to be based on how loudly or energetically you yell and sing into the open mike. I actually scored an A+ on the task, perhaps because I’m an energetic person naturally. I was thrilled of course, but… every time I walked by the demo that day, I saw someone else able to do the same, which makes me wonder if the final score was a little bit rigged for the sake of playing well at PAX.

This game definitely relies a lot on VR for the full immersive experience. Without it, you wouldn’t have the same awful feeling of really being in front of a big hostile audience. But I don’t know if the experience has a lot of repeat play value. I think Stage Presence probably plays the best in an environment exactly like PAX, where people can watch you sink and swim while waiting their turn to try. But that makes me wonder why it also seemed to be turned down to such a very easy difficulty. What’s the real fun if someone doesn’t walk away embarrassed once in a while? The full release promises a story mode, so maybe I’ll get answers to those questions when it launches!

I Expect You to Die

Schell Games (disclosure if you didn’t know: a former employer of mine) had a booth at the Indie Megabooth showing off two of their VR titles this year. Their most popular VR title is I Expect You to Die, a spy simulator using the Oculus Rift. It’s not hard to understand why there were long lines to play this one. For one, the game uses the Oculus Touch controllers, which aren’t quite available for general purchase yet. Also, it’s an extremely fun, funny, and immersive demo.

In I Expect You to Die, you play a somewhat-incompetent spy trying to figure his way out of puzzling situations. Can you manage to start up the villain’s secret car prototype, and successfully drive it away, without activating a number of clever booby-traps? You probably can’t! Or at least, not on the first try, which is exactly where the name of this game comes from. The Oculus Touch controllers give a player the ability to use their hands in VR, as well as a type of telekinesis to reach faraway objects. The fun of the game comes from interacting with physics objects and seeing how they operate virtually. (The rest of the fun comes from exploding.) 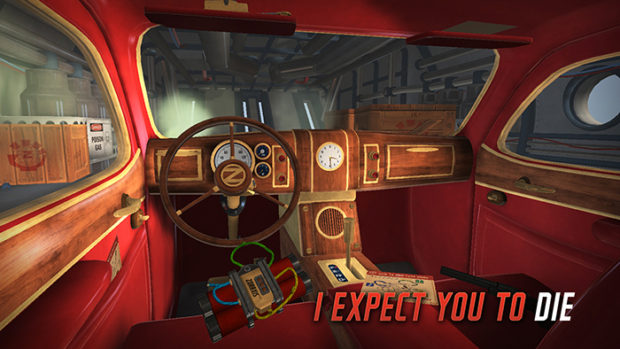 Another Schell Games title, Orion Trail takes a game developed in a successful Kickstarter and puts it into VR using the Samsung Gear. Orion Trail is the game that would happen if Oregon Trail met up with FTL and had a three-way with classic Star Trek. You play the captain of a ship traveling through a procedurally generated galaxy adventure. In your mission, you’ll have to balance the needs of the crew and your ship’s integrity while you are up against deep space dangers like Warp Weasels, Space Hippies, and of course the dreaded Space Dysentery. The experience is menu driven, but in VR, it puts you at the helm of your own virtual starship. You can sit behind the captains chair nice and cozy while you send your digital redshirts out on dangerous away missions. They could return to your ship with bounty, or get vaporized in the process.

A bit of a cheat: I didn’t actually have to play the Schell Games demos at PAX, because… I’d already played them, when I took a tour of the studio last month! I recorded the visit for Microsoft Channel 9, so if you haven’t seen it yet, I’ll embed that video below so you can vicariously experience VR through my fumblings in VR.

I intercut some of the trailers for each game too so you can get a feel for what the games are actually like, but with VR, there’s no experience quite like doing it yourself. If you have a Gear VR, Orion Trail is available right now, and I Expect You To Die has a free demo for Oculus Rift. Orion Trail without VR is also on Steam!

I didn’t even come close to playing all the VR demos that were available at PAX. Maybe I’ll get a chance to try a few others when I go to the next show later this year.

Next entry: More video interviews straight from the show!