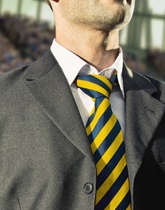 4/5 Thumbs Up
“Although some key features have been lost in translation between the PC and iPhone versions of Football Manager, inevitably so given the vast difference in resources available to the two formats, Football Manager Handheld is an exceptional – if not perfect – first step into development on Apple’s handheld from Sports Interactive.”

It’s late March and a rich vein of form has seen my struggling side launch a late push for the Championship play-off positions. As an unproven manager appointed on the cheap against the wishes of an expectant fanbase, pre-season expectations amounted to little more than mid table safety, something which I am on course to achieve if not exceed during my first season in charge. But I want more. My next game is away from home against Queens Park Rangers, sitting comfortably in 6th – the final play-off spot. Positioned 9th myself but several points adrift and with games running out, it’s a must win game if I am to sustain my push for a top 6 place.

Against the run of play, my side take an early lead; a young winger signed from League One obscurity earlier in the season slamming the ball home to make it 1-0 inside 10 minutes. Delirium ensues but proves to be short lived. Just before half time, QPR equalise as the result of a mix up between my centre back and goalkeeper. “Typical Wednesday”, I mutter to myself, picturing the last 15 years worth of Sheffield Wednesday defensive errors and squandered leads, of which I assure you, are numerous in number. As a fan of this particular club, I can sense what is coming. True to form, my team blow it. Pushing hard for the winning goal as the clock ticks down towards the 90 minute mark, we lose possession in midfield. A swift QPR counter attack later and the play-off dream is over. 2-1 to the home side. It takes a matter of mere seconds to effectively kill my season.

Frustrated with my teams inadequacies and inability hold a lead, I take a deep breath, save my progress and exit the game. At that point, I rise from the toilet seat, open the cubicle door, wash my hands and go back to work.

Football Manager Handheld is a dangerous proposition, particularly taking into account that so many of the positives from the lead PC product have been retained for the iPhone edition. Crucially, Football Manager Handheld has got a soul. The “just one more match” factor is here in abundance, as is the sense of unpredictability which makes both the game and the real sport it portrays so exciting and totally different every time you play it. Where other management sims on the App Store have failed in this regard, offering little more than an awkward and ugly attempt to beat a computer at stats management, Football Manager Handheld is a game with a personality. Sports Interactive are the masters of their trade at work and the results of this somewhat surprising iPhone version – often requested by the community but always denied previously – are largely impressive. The potential to experience defining moments like the ones above whilst having a number two on works time, instead of being restricted to my desk at home, could threaten to be both a blessing and a curse. At least as far as my work productivity goes. 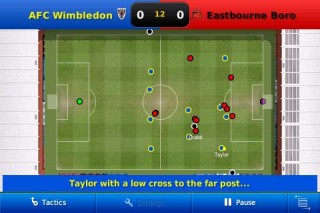 From a gameplay perspective, Football Manager Handheld literally feels like a “Lite” accompaniment to the full fat desktop version. In order to make the portable experience work, Sports Interactive have opted largely to streamline rather than remove too many wholesale features, and the results are commendable. In many respects, it feels more reminiscent of “old school” management sims, with much of the fat trimmed from the edges and the emphasis placed very much back on the basics of football management.

Clearly built with the PSP version in mind, Football Manager Handheld for iPhone features a UI that will be largely familiar to existing portable managers. A persistent info bar displaying your name, club badge, date, time and a link to either the home screen or your mail box will appear at the top of the screen, whilst a thin bar at the bottom will display contextual commands and links depending on what screen you’re currently viewing. The middle portion of the screen will display the bulk of information available to you, with a home screen acting as a central hub with links to your club management and other information. Although it will take a while to really dig around and familiarise yourself with the format, it shouldn’t take long to master once you find your way. Credit must go to Sports Interactive for managing to wrap so much information and stat heavy gameplay around such an aesthetically pleasing and easy to navigate menu system; one that lends itself almost perfectly to the touch screen controls at that.

To fans of the franchise, starting out in Football Manager Handheld should be a seamless experience. Squad management is almost unchanged from the standard game, with a list of your squad players on one side of the screen and a pitch graphic on the other, allowing you to drag and drop your chosen starting 11 into position. Each player can be clicked on, bringing up their stats and allowing you to flick left or right to view other screens including their playing history, form and transfer status. You can also set your teams tactics in a separate window, although perhaps most disappointingly, this is probably the most noticeable area where Sports Interactive have trimmed and cut the experience. 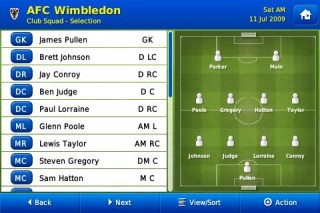 Whereas as tactics management in the full game offers potentially hours of tinkering with different philosophy’s and styles, Football Manager Handheld keeps things simple with a vastly more basic option set. Individual player instructions are thrown out completely whilst team instructions are whittled down to just 7 variables; including team mentality, passing style, the strength of your tackling and whether to press, play an offside trap, counter attack or play with men behind the ball. For some, the no-nonsense approach to tactics will remove some of the headaches experienced within the full game, whilst maintaining enough flexibility to stamp their own style on their team, but for those who enjoy the deeper tactical flexibility that Football Manager 2010 offers on PC, the iPhone experience could prove to be a shallow one.

Perhaps where the streamlined approach to tactics becomes most restrictive is during the matches themselves, which leads onto my second major gripe with what Sports Interactive have opted to remove from the experience. Although I certainly see the removal of pre and post game press conferences as a positive, the lack of team talks with your own squad is a little more jarring. By taking away the option to give your team the proverbial hair drier at half time or issue specific instructions to a second half substitute, iPhone managers are left with only their 3 substitutions and the 7 tactics options to try and turn the tide of a match. When needing to make big changes to effect the outcome of a match, this can often feel a little inadequate, particularly when compared to the full game where a careful choice of words at half time can often be the telling difference between victory and defeat. For the experienced FM player, this is an option very much conspicuous by it’s absence.

Team talks and tactics aside though, the other areas of reduction for Football Manager Handheld generally work well in context. Make no mistake about it either, this is still an incredibly deep and involving experience. A player database of over 20,000 individual players from 34 leagues across 11 countries, each with their own stats, abilities and personalities, is impressive to say the least. News stories hitting your inbox are generally more relevant to your squad and cut out alot of the less relevant stories from the full game, whilst the lack of control over staff, reserve or youth teams keeps you focused on the main task of managing your 1st team. An active and fully customisable transfer market allows you to sell, loan and buy players to tailor your squad to your own suiting and a simple to use scouting system allows you to search out talents from around the world who you might otherwise have missed. Sticking closer to some of the features from the PC games, Football Manager Handheld also includes a manager profile that tracks your every move and stat, as well as interaction and feedback from both the club’s board and fans.

Although some key features have been lost in translation between the PC and iPhone versions of Football Manager, inevitably so given the vast difference in resources available to the two formats, Football Manager Handheld is an exceptional – if not perfect – first step into development on Apple’s handheld from Sports Interactive. The more basic feel of sections of the experience make this closer to football management sims of old such as Championship Manager 01/02 than to Football Manager 2010, but to some that will come as a breath of fresh air and in the context of a portable version of the series is hard to fault.

What Football Manager Handheld does achieve is the priceless hook that transcends the importance of a mere feature list. Although the comparative lack of depth here won’t render the desktop version obsolete just yet, the soul of Football Manager – whether it be the achievement, the desire to achieve after failure or the “just one more match” factor – is ported from PC to iPhone almost without compromise.

As a fan of the genre, it’s hard not to love. It’s Football Manager in my pocket, on the toilet, on my desk at work and on the bus. Sold.