In my current dayjob I cover a travel territory that reaches through Pennsylvania, out to Baltimore and outside of the DC area. I have met a lot of cool developers through Philly Dev Night who like to come out to Philadelphia every week to create, discuss, and play indie games. I’ve also met some students and researchers doing some fascinating things with game technology to make the world a better place for gamers and non-gamers alike. So, I’m starting a new series of articles. For the next few months, I, AJ, am going to be traveling around my neck of the world talking to indie developers about the work being done in the Philadelphia/Pittsburgh/Baltimore/East Coast gaming scene. I meet interesting people every day, and I want to share their work and words with you!

I’m kicking off the series by talking to Shawn Pierre, the sole proprietor of OriGaminc in Philadelphia, PA. He’s just coming off of a successful Kickstarter for his card game These French Fries are Terrible Hot Dogs and has presented his games at IndieCade East, the Boston Festival of Indie Games, and the Indie MEGABOOTH at Pax East. I asked Shawn a few questions about his current work and future plans. Check out our interview below the jump:

AJ: Your game label is OriGaminc – why did you choose that name, and what would you say is the “character” of the stuff you do so far?

Pierre: OriGaminc isn’t a terribly clever name. It’s the odd combination of the first three letters of ‘original’, ‘games’, and ‘incorporated’. To me, the name sounded like the title of a studio with the job of developing new, original games, as I would expect most game studios would like to create.

It’s a fairly innocent, and now that I think about it, pretty cheesy. However, combining the individual words into one creates something new, something a bit weird, and holds the important part of my game development plans, which is to create original games.

The character of my work, though, can best be described as some sort of Frankenstein, without the negative side effects that most reanimation projects of that name may produce. I say this because there’s no one genre I wish to stick with, no gameplay format that I want to be a stranger to. I’ve worked on single player games, smaller multiplayer games, larger multiplayer games, games with alternative control schemes, and games with odd phone calls and texting. If I had to combine each of those into a single character, it would be a Frankenstein, but one that I hope others can relate to. 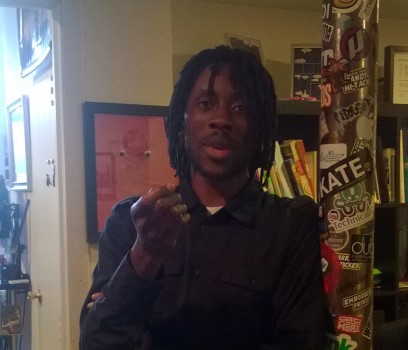 AJ: What made you want to start making games?

Pierre: Sometimes, I wish I had great story for my history of why I’m trying to do what I do.

As most young children seem to do, I loved playing games when I was younger. I didn’t start programming anything on a computer until I got to college, but before then, I was always trying to make games. In grade school, a group of us worked on board games. For us, this meant getting several large pieces of poster paper and making maps, grids, or whatever was needed to create the game. Often, a single game would span several pieces of large paper, each containing a separate portion of a world, each with strange rules and standard grade school art.

One defining moment that I can think of was when I simply walking with a group of friends. I forget exactly where we were going, or what we were doing while we were walking, but I decided to turn our trip into some sort of game. After one person in our party listen to me explain whatever haphazard game I wanted to create, I was met with the response, “Why do you have to make everything a game?”

I guess there wasn’t anything specific that made me want to create games, and the answer is really quite simple. I was born a game developer. 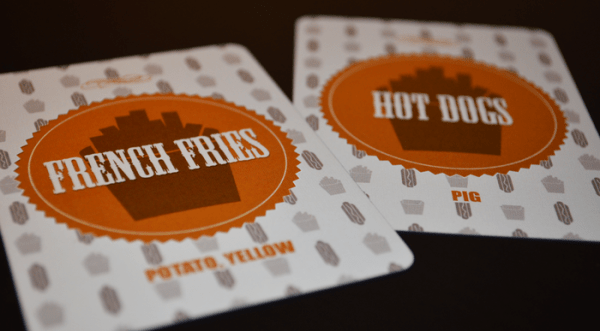 AJ: These French Fries Are Terrible Hot Dogs – where did the idea for this game come from, and how has the game changed and developed over time?

Pierre: The name of the game came before the actual concept. I was with a few friends at a local billiards place which also sold food. One person ordered pierogies, and after eating them, declared that they did not like them. Someone else tried the pierogies and said that they weren’t that bad. The original owner of the pierogies stated “Well, if you said that this was a potato based dish, I would say that they’re okay, but if you said that they were pierogies, I would say that they’re awful”. I followed up with, “Yeah, it’s like if someone gave you french fries and said ‘Here, try these hot dogs!’. You would say ‘These french fries are terrible hot dogs!’”. People thought that was funny, and being in a group of game developers, the idea of a game with that title being created was thrown around. On my way home, I started to write down additional ways that this game could be played and came to the basic format of the game.

Terrible Hot Dogs hasn’t changed too much. In the beginning, most of the cards were food cards. However, when prototyping with index cards, someone took a few blank ones and wrote non-food items. We played with that deck, and the game became much funnier, especially when people tried to convince others that a fire truck was a toilet or a burger.

AJ: What did you learn by bringing Terrible Hot Dogs to Kickstarter? What do you see as the future of the game?

Pierre: I learned that Kickstarters are pretty wild! I’ve always heard that it’s like having a full time job, and I definitely agree with that. Most of the time, you’ll need to do your fair share of work to find yourself on the successful side of a Kickstarter project. I was fortunate enough to have a lot of friends who supported me as I was working on the game, and I’m definitely grateful for that.

What I’d really like is for the game to be played and enjoyed by as many people as possible. I really love watching people play, and listening to the creative comparisons that they create.

AJ: You also are working on Henka Twist Caper with the PlayStation Move. How did you get started working with the Move controllers? What’s it like developing broad physical games?

Pierre: One game that I really enjoy playing is called Johann Sebastian Joust, a game which uses Playstation Move controllers. The basic goal of the game is to jostle your opponents controllers while protecting yours. There are musical elements in there as well, but that’s the main concept of the game. Before long, I found myself with seven PS Move controllers, and figured I should make the most of them. 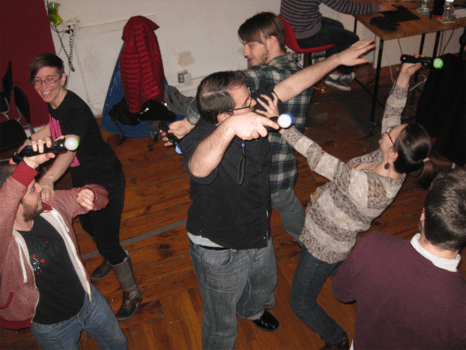 From there, I started working on a game called Rainbow Bacon, which was a version of the school yard game Steal the Bacon. However, this version took advantage of the Move controller’s functions, such as the accelerometer and the lights which could change color. While that game was fun, it served to be more of a learning process for me on how to find the best uses for the controllers. Several months later, while in between projects, I decided to go back to the Move controllers and focus on the parts I felt were the most enjoyable from my previous experiment. The result of that is Henka Twist Caper.

Henka Twist Caper is a mix between a sumo match and standing Twister. Players must twist and turn the controllers until they find their secret orientation. Once they find the correct orientation, their team’s meter begins to fill. Once full, that team wins the game. One important piece of information is that players are allowed to impede their opponent’s progress, and try to force them out of position. So, it’s a constant struggle, trying to keep your controller in the right place while stopping others from doing the same.

Physical games are a joy to work on and create. One of my goals as a developer is to work on as many different types of games as possible, physical games being no exception. Watching people move back into the realm of games that they played as children is something special to watch.

AJ: You were called out during a GDC rant session as an indie developer to watch out for – how did you feel about that?

Pierre: I was definitely flattered. Shawn Allen, the speaker who did that, is a super cool person, does some awesome work, and had a really good rant session. I don’t think that I’m someone to watch out for, though! 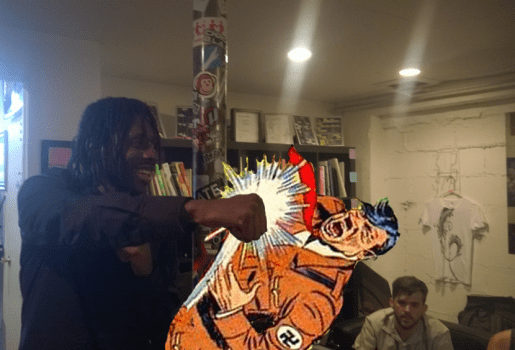 As part of our interview, Shawn asked if I would also Photoshop him punching Hitler. I’m full service like that.

AJ: Any other cool future plans we should know about? Any technologies or people you’re dying to work with in the future?

Pierre: I’ve been waiting for an NFC ring to arrive, as I have a few game ideas that I would like to try out. I’ve also been working on a 10 person phone game designed to be played at parties and events. Some ideas are more fleshed out than others, and hopefully they become more complete projects.

I want to thank Shawn for his time, his responses, and for some fun games!

Stay tuned for more as I travel throughout the area seeking out games, their developers, and their stories!

Side by Side: Johann Sebastian Joust