During a conversation over one particular weekend, our beloved fellow columnist Gregg B announced to me that he had, during one particular Demon’s Souls boss encounter, utilized an artificial intelligence (A.I.) glitch to his advantage.  Shame on you brother I said, without inquiring for the full story.  However, it did get me thinking about A.I. within videogames…

Since the original Half-Life, I have only ever been impressed with another videogames A.I. once.  Half-Life’s marine encounter is a gaming landmark, sadly however, even in Valves future endeavors A.I. has evolved little and at times has felt notably worse.  What bothers me though is how critically, A.I. is seldom picked upon.  Industry journalists and publications spend very little time discussing A.I.  I can’t actually remember the last review I read where A.I. was even mentioned.  The prevalent attitude (unless it is notably faulty) seems to be “If it’s functional, it’ll do”. Which to me, just wont do.

STALKER, the much imperfect game that it was, emphasized the possibilities A.I. could have within a videogame; the very nature of the open game world dictating and complimenting such possibilities.  Nonetheless, the fact that a studio with very little resource could achieve such A.I. (when it was working) deserved significantly higher praise than was given.  Far too many magazines at the time dwelled on the A.I.’s shortcomings, as opposed to praising the steps GSC Game World took in actually trying to breathe new life into the opposition players face.

At times STALKER’s A.I. was brutally brilliant.  Being ambushed by a group of soldiers in the Zone was nerve wracking and exhilarating, and for the most part allowed the player to forget they were being attacked by computer opponents.  Thankfully, I seldom encountered many of the games well documented issues.  I encountered A.I. which I consider the benchmark of what developers should be striving for.

The question I have been asking myself recently though, is when did selecting a games difficulty determine player resources and A.I. hit points, instead of A.I .ability or mission structures?

When I choose a difficulty setting in a videogame I want to be challenged mentally, against foes who from the lowest difficulty to the highest, show a continuous marked improvement in the way they act in a combat situation.  I want to be safe in the knowledge that I won’t be cheaply punished by the game for selecting a higher difficulty level.  Providing me with less ammunition, increasing enemies health and giving enemies godlike accuracy may be a sure-fire way of making the game harder, but it also undermines a player’s ability. In COD: Modern Warfare 2, giving soldiers pin-point accurate grenades that are infinite in supply leaves the user feeling cheated, and subsequently draws you away from it’s immersion. Inevitably these idle developer methods do little but highlight you are in fact playing against a computer.

To use another example, the Combine in Half-Life 2, irrespective of difficulty, have poor A.I. From Easy to Hard, the only difference is the amount of resources the player is given, the amount of health the Combine have, and the amount of damage they deal.  Their path finding, cover tactics, defensive or offensive routines do not change;  I have tested this extensively over the last few days, and won’t even begin to discuss the awful sidekick A.I.

Now, is there value in playing at a difficulty which conspires to make the games core framework more challenging, but offers little narrative or cognitive reward in return?

While I understand the financial constraints in developing competent A.I. or adaptive mission structures, we are now regrettably being bombarded with the new Goomba.  A series of enemies within varying games that have strictly established, simple A.I. patterns, who serve no other purpose than to act as cannon fodder.  From Killzone 2 to Devil May Cry, the only challenge from these dull filler enemies is in their numbers, and not in their tactical ability.  While supporting them, are a series of boss encounters that have a similarly limited array of predefined routines and skills that with practice and patience offer little in the way of challenge.

Demon’s Souls is the culmination of this developer approach, where A.I. routines are honed to such monotony that the simplest of boss encounters become treacherous (and torturous) as the game serves to punish you for the tiniest mistakes.  Of course, for the most part it is through your own lack of repetition (or practice as some might refer) of the encounter that serves to undermine your personal ability. However, it highlights that instead of placing criticism on a game where A.I. patterns are so fundamentally simple, we instead praise its ingenuity.

Stepping away from A.I. routines and enemy skill sets, Thief was a perfect example of how difficulty should be adopted within a videogame.  By making the rules for success more difficult through its mission structure, players were encouraged to adapt the way they played.  By increasing the difficulty from Normal to Hard, the number of missions a player had to undertake were increased alongside available loot, and a restriction to killing humans was put in place.  This fresh approach did not alter fundamental game mechanics (guard health, player resources, enemy numbers), but allowed for a stricter, more challenging game for those who wanted it.  Crysis follows Thief’s approach, with harsher game parameters based on the difficulty you select; notably guards no longer speaking English and radar restrictions put in place.

So why is it then that developers continue to use an archaic difficulty method to prolong a games life span, when making use of many games existing mission structures and locations not only adds more weight to a games content, but serves as an incentive to challenge the player where the A.I. is fair, as opposed to the game creating a false sense of difficulty.

It would be unfair to request such A.I. changes and adaptive structures onto all games, as many do not offer the open world approach that Thief, Crysis or STALKER do.  However, where financial resources are swallowed whole by development studios that desire to make their game the most graphically appealing, it is no wonder then that many titles released today feel like they have evolved very little.

Where Bayonetta is the pinnacle of the Ninja Gaiden and Devil May Cry evolution, honing combat to perfection and empowering the player with a wealth of skills and 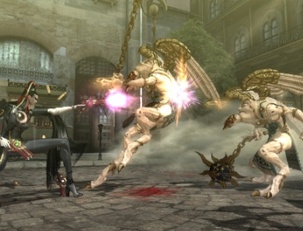 combat abilities that sway the user into believing they are almighty powerful, it is surely undermined by the predictable A.I. whose only purpose is to encourage such a feeling of empowerment.  You are in fact a giant amongst ants, and nothing more.  To address this balance with genres akin to Bayonetta, development studios should be placing more emphasis on refining what they already have, and strengthening the core experience the user has.

When a genre has arguably reached its potential and is trapped beneath the glass ceiling (racing games currently finding itself in such a position) why are developers still so quick to improve everything else besides the fundamentals of what makes a game enjoyable in the first place?  As developers tinker away with subtle refinements that have little to no impact, when are they going to realise that in order to bridge the gap between player interaction and immersion, they need to place greater emphasis on autonomous A.I. encounters in order to challenge the player and create “wow!” moments that are talked about for generations, instead of relying on spit and polish to cover the cracks.