According to Apples latest annual report, 20.7 million phones were sold during 2009, representing an increase of 78% compared to 2008, and generating a total revenue of $6.8 billion dollars.  Net sales of other products and services increased to $696 million dollars predominantly, according to their report, because of an increase to net sales of third party digital content and applications…

Now sadly the report does not give a breakdown on categories of sales, so it would be impossible to guess how much revenue was generated by specific companies. However, what is evident from this information and seeing the App store daily, is that large game developers are quickly cottoning onto the fact that much like STEAM, the App store and the iPhone (specifically the 3GS) has the ability through its downloadable content and hardware to make serious money, with little financial outlay.

Grand Theft Auto: China Town Wars is the perfect example of what the iPhone is capable of.  Rockstar Games have managed to port the entire game, without sacrificing any graphical quality, while still maintaining silky smooth frame rates.  In addition, they have also managed to implement the famed radio stations of GTA, linked to the players iTunes.  The distinct lack of a physical control method has been replaced with onscreen touch replacements to great effect. This demonstration of ingenuity from RockStar (similarly developed for other iPhone games) solidly demonstrates the 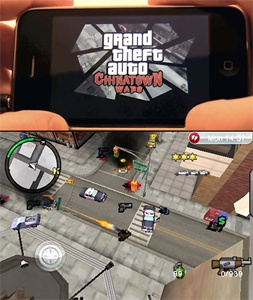 potential the iPhone has as a gaming platform.

With the significant increase in speed that the 3GS has offered, developers are naturally aligning themselves to another platform where revenue can be achieved.  Despite relatively poor sales on the PSP in comparison to the DS counterpart (undeservedly so I might add) the iPhone version of GTA:CW has remained top of the App stores sale charts since its release.  At only £5.99, it’s a fraction of the price when you consider the identical DS and PSP versions start at £25.00-£30.00

What stuns me the most however, is the hardware capability that the iPhone demonstrates.   I won’t bore you comparing the devices; you can find their specifications here and here and here.  But what is evident is the landmark I would consider Rockstar have achieved in bring GTA:CW to the iPhone.  With sound, reams of dialogue, cut scenes and 3D graphics of the highest quality, I was honestly astounded when I played it for the first time.  You can’t help but think to yourself “But it’s a bloody phone…a phone!!”

The NGage’s foresight at merging videogames with mobile phones was met with much scepticism at the time of its launch, and I will freely admit I was at the time part of that scepticism, often voicing the opinion that the two should remain mutually exclusive.  However, Apple have bridged the gap with such finesse that it seems to have happened without a mass marketing barrage.  Of course, a large percentage of iPhone owners will never touch games on the device, mainly due to the broad spectrum of individuals who own the handsets.  But, what is appealing to developers is that even if 5% of the 40 million iPhone owners purchase their game, encouraged by the cheap price tag, then it becomes a significant revenue stream.

Doodle Jump, one of the most famous and ludicrously addictive iPhone games by an indie developer is estimated to be well on its way to achieving two million downloads.  At 0.59p you are looking at a potential total gross of $2million dollars.

The accessibility and low cost that the App store offers gives indie developers, and the heavy weights equal opportunity to flex their creative muscles, where word of mouth over marketing budgets is king.  With no distribution costs for printing manuals, discs or game cases and a development kit for the iPhone costing as little as £100, it truly does become an attractive prospect for independent studios and individuals.  A platform to truly show off their wears.

The question I want answering now is how long will it be until Microsoft, Sony or Nintendo develop a console which is exclusively download content only, where they have all their games released onto their equivalent of the App store at a fraction of the price.  Surely it is an inevitability; we are already half way there.