Yesterday, The Ville became a thing you, too, could actually play.

Today, I played it. 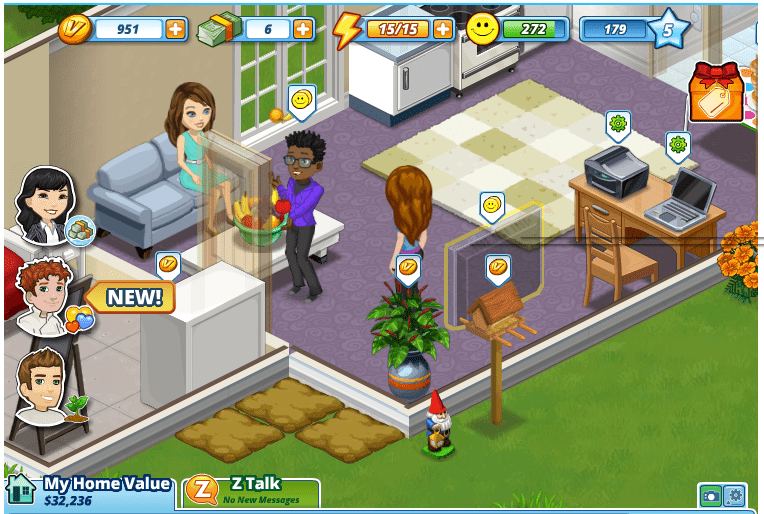 It’s pretty much The Sims Social. 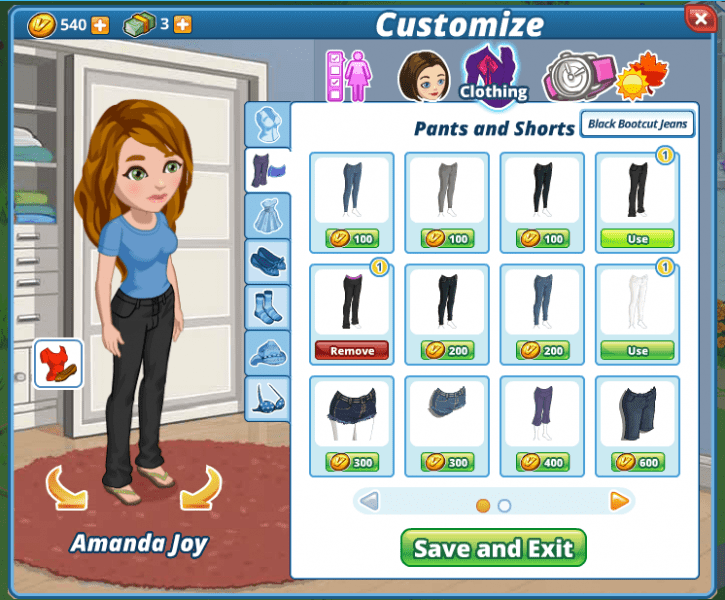 Here’s my avatar in The Ville. Those jeans show off a distressing amount of cameltoe, so I didn’t end up choosing them. I went with the butt-hugging yoga pants instead. 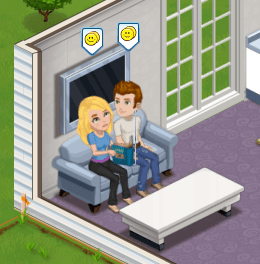 She has blonde hair in some shots, because the interface is still buggy about letting me change her hair color. My hair in the real world is more on the auburn side now, but you can’t have red hair without paying real money. Maybe a little cheaper than buying red hair in real life, but still money.

If I want in-game money (the technical term is soft currency), all I have to do is click on things in my house. Basically anything. If my avatar wants to go to her “job,” I click on a job object in the house. A little time passes, then money happens. For example, if my avatar would like to “write a column,” kind of like I’m doing now, she just has to sit at the computer for a half-second. After eight hours, a column magically appears in the computer. This generates money. 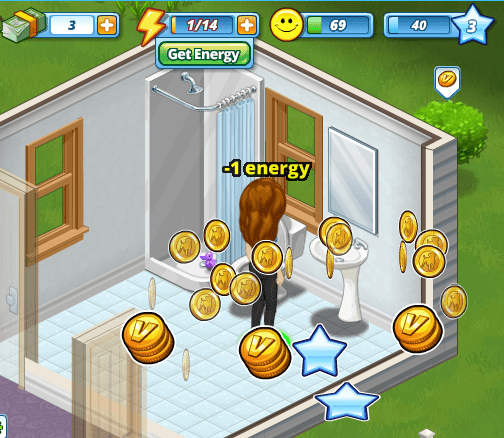 If that isn’t realistic enough for you, money also flies out when I wash my hands in the sink.

This game is pretty silly.

Sometimes I step out and defend social games. A year ago, I explored, and wrote a partial defense of, Zynga’s CityVille.

Let’s look at what my CityVille looks like today. 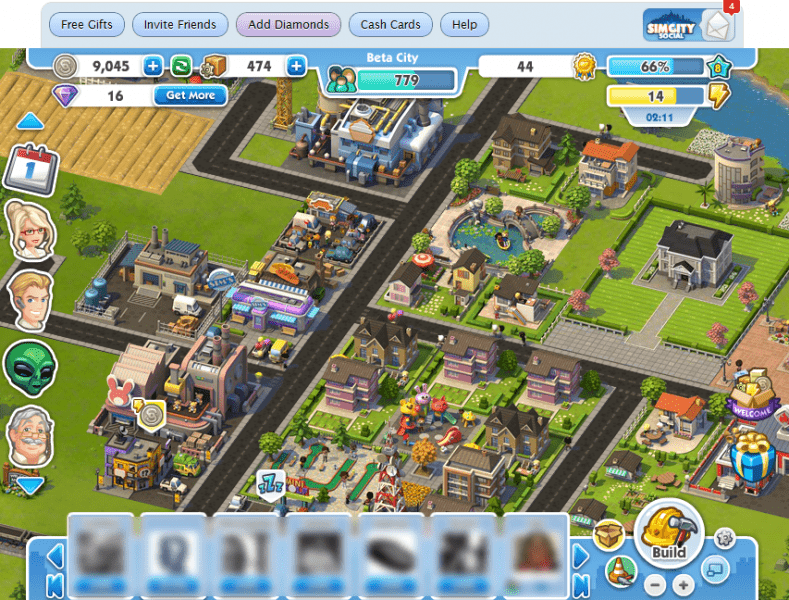 Oh, my mistake. This is my SimCity Social city. (I blurred out my friends bar to protect the innocent bystanders.) SimCity Social and CityVille look pretty similar. To boot, if you’ve played SimCity Social, your SimCity probably looks a hell of a lot like my SimCity. The game gives you very specific city-building quests in a very specific order. Everyone starts with that ice cream factory. The putt-putt was at least optional.

Anyway, here is my CityVille. 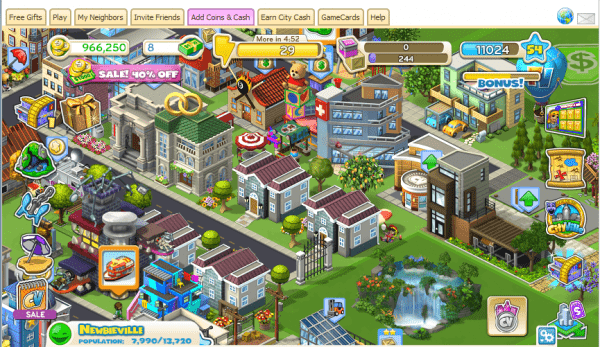 I don’t like to play CityVille anymore. It got too complicated, too cluttered and too confusing in the span of a year. A city that I used to feel sort of attached to, in a social game kind of way, is now covered in a thousand different quest pop-ups advertising a thousand different things. The line of little icons on the right hand side are Zynga trying to get me to cross-promote with their other games. The line of icons on the left hand side are different quests, of which I now have over one-hundred incomplete. Most of the quests involve placing some sort of new building, but I’m out of space for new buildings. I could expand my city for the space, but I’m tired of spamming my friends asking for expansion permits. That picturesque-looking waterfall in the bottom right is actually on a plot I haven’t unlocked yet, so if I did unlock that plot, I still wouldn’t have space. Aside from begging friends, my only other option is to pay money, but I estimate it would take thousands of dollars to actually clear out all those uncompleted quests. I don’t really want to. Sometimes I visit the city, just to look around, and then I leave.

This is the exact same burnout I experienced with Zoo Kingdom. Zoo Kingdom finally solved this problem for me by not existing anymore.

Zynga doesn’t want me to churn out of CityVille. Sometimes they send me e-mails begging to come back. But if I do turn away from it, it’s okay, as long as I play The Ville instead. They would be happier to grow their business, but they’ll settle for shifting a customer from one box to another. 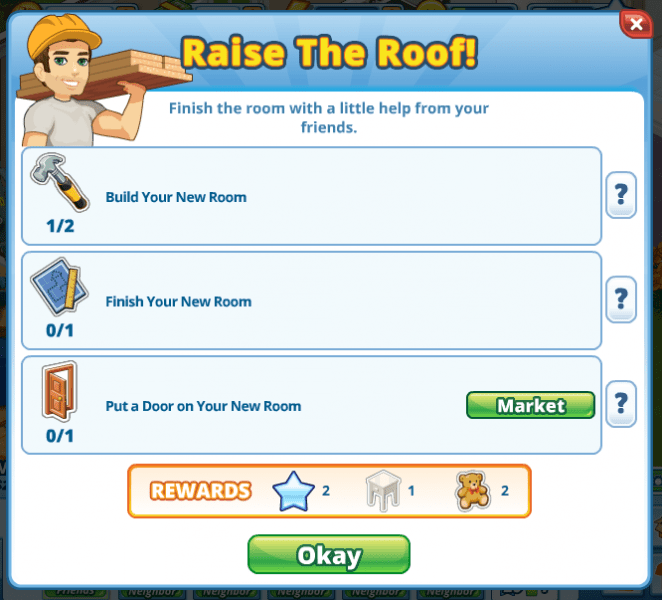 Back in The Ville, it’s time for me to expand my house. Like with the city, I need to bug friends to help me expand. But the first expansion is free. My Sim – no, wait. My… Villain? needs a place to sleep for the night. With the help of a pre-generated friend (first hit is free) I now have a bed. 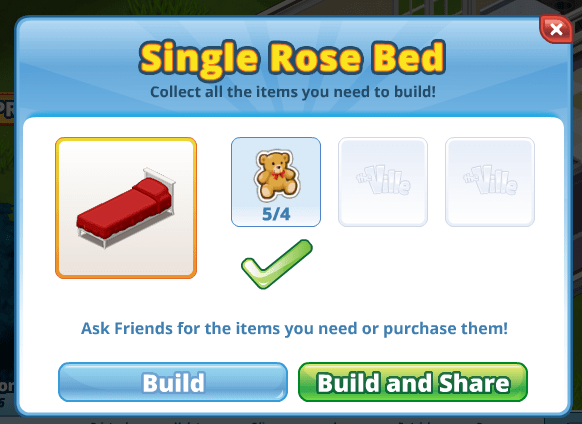 Here’s how SimCity Social shows that I can choose not to share. 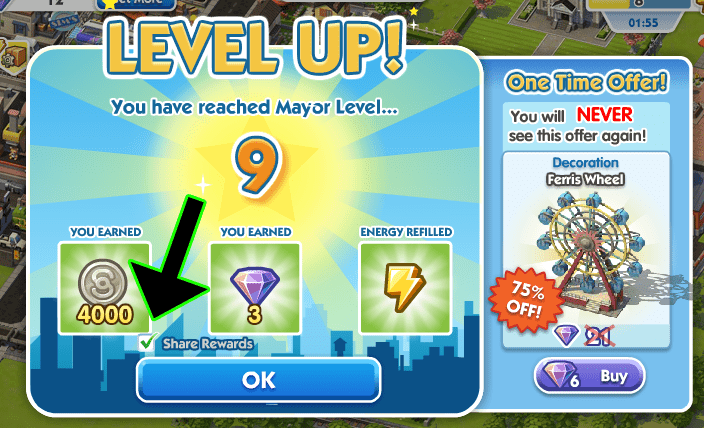 I drew a big arrow to show you the “unshare” checkbox. It’s otherwise easy to miss. This little checkbox is always on by default, and I have to remember to uncheck it any time I get a pop-up. It blends in to the background of the window. This has trapped a lot of otherwise intelligent people, who wouldn’t be sharing this stuff on purpose otherwise. 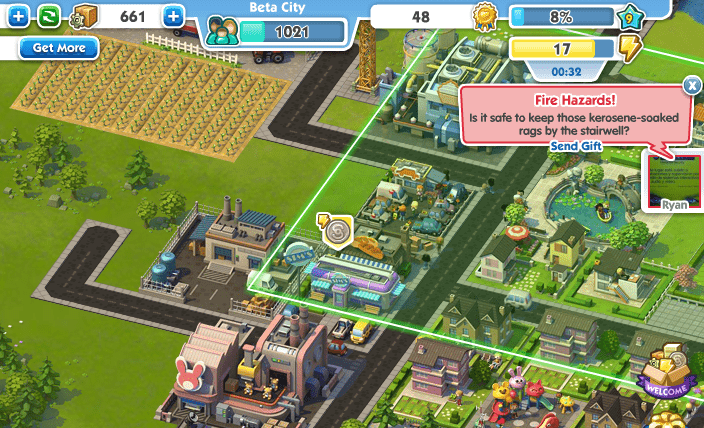 No blurring this time. This Facebook icon belongs to my husband. He is very SimConcerned about a SimFireHazard in the SimHouse in which he SimLives. Except I know he doesn’t live there. He has no interest in playing SimCity Social. But SimCity Social saw we were close friends, and thought maybe it could trick me into thinking that he was. The designers must know by now that I would never choose to send game invites to people who weren’t interested in playing. They have to come up with ways to trick me into thinking my friends are interested now.

They need to do that, so they can grow the amount of users on their platform.

This kind of thing makes a lot of tech-savvy people really upset. 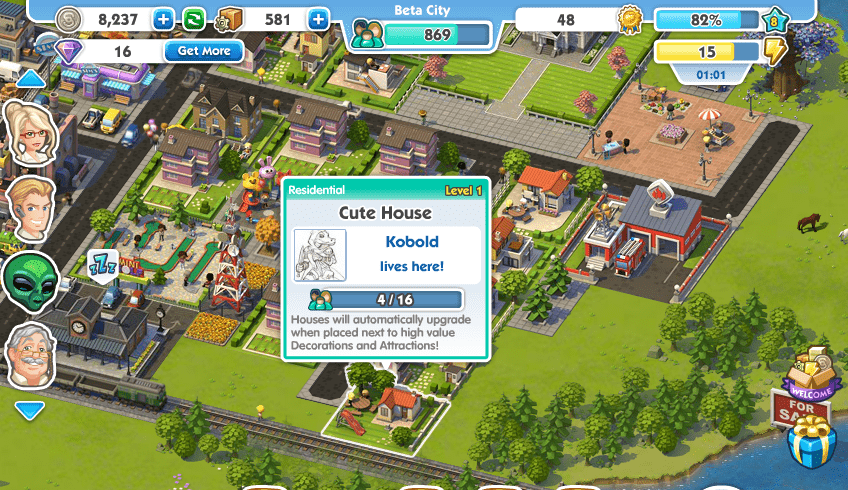 Kobolds moved in? Well, there goes the neighborhood.

A common criticism leveled against social games is that they are “not games.” Some people say that in order for something to be a game, there has to be a risk of failing or losing. I’m sorry to say to those people that social games fit most every academic definition of “a game” that I am aware of.  Sid Meier famously defined games as “a series of interesting decisions.” Social games don’t seem to fit this, but some people don’t agree with Sid, and his words hence have indicated he never really meant for that to be academic. So, in my mind, we should throw that one out.  Bernard Suits, in his book The Grasshopper: Games, Life, and Utopia, gave what is probably my favorite definition of a game, which is, in part, “playing a game is the voluntary attempt to overcome unnecessary obstacles.”  In Salen and Zimmerman’s Rules of Play, a book often used as a textbook in introductory game classes, a “game” is defined as “…a system in which players engage in an artificial conflict, defined by rules, that results in a quantifiable outcome.” Social games fit both of those definitions just fine. There are unnecessary obstacles: in the form of time sinks, multiple clicks, having to pay money, or spamming your friends’ Facebook walls. There are rules. There is artificial conflict, and a quantifiable outcome (having a bigger virtual yard, fence, whichever). This is a game.

Another common criticism leveled against social games is that they are “not social.” I don’t have an academic definition of “social” to share with you. But, for some people, I believe that they are, as they promote interactions between internet friends. When you see “so and so sent you the coffee bean that you asked for!” you might believe for a moment that you interacted with that person. You might talk to them later about the coffee bean.

Another, other common criticism leveled against social games is that they don’t require any strategy or thought. This is actually true.

But, well, I hate to break it to you, but a lot of normal people don’t really want to do a lot of thinking when they play games. Family board games with zero thinking and strategy, such as Chutes and Ladders, are perennially popular. Call of Duty and other modern shooters tell a player exactly what to do, the player does it, and then the player is rewarded. “What to do” involves shooting, but that’s not so different than “clicking a house three times.”

So lots of gamers – and here I am talking about the new breed, the scary “casual gamers,” a group which often includes older women rather than younger men – don’t actually want to shoot things. They don’t want to click things to make them die. They want to click things to make them grow, instead: pretty flowers, strawberry bushes. They want to build houses and make food. Social games almost always have some kind of delightful food. Here’s The Ville again, where my avatar is gorging herself on virtual blueberry pancakes. 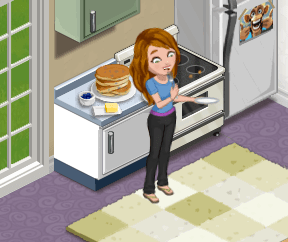 Some gamers just want to eat pancakes. And they want to have friendships and romances and even sex, without having to shoot their way through a dozen drab corridors to earn the right. Many of them want to do this without the additional baggage of a sci-fi or fantasy or serial-killer scenario. They want to play House, like they did when they were younger. And they want to play what their friends are playing.

So, we have these social games.

The way their margins work, it’s possible that they have to do this. Zynga, in particular, whose wagon is hitched to Facebook, doesn’t seem to be doing so hot on the stock market. The stock dropped wildly when The Ville and its like was announced this week, and it has yet to recover.

Like it or not, Zynga has created a new kind of gamer: a kind that likes its games. If you’ve ever played a certain type of game for a long time, you start to realize that games in the same genre have a typical common language, in the UI, etc. It’s not just “ripping things off.” It’s giving the player what that player has come to expect. The players who have been playing Farmville, CityVille, etc., like this sort of thing (as has been previously established), and have gotten used to it to some degree. They want other games that they play to be as familiar to them as these games are. That means similar UI choices. That means safe themes, mostly grounded in reality. And that means free to play. Free to play usually means “but pay for in-game stuff,” but this kind of user doesn’t feel quite as generous about buying in-game stuff as some other types of users.

This type of design is what we were left with.

Core gamers: here is my point. I’m asking you not to dismiss social games entirely. They’re weird, and silly, but they make a lot of people happy, just like weird, silly hardcore games do.

Social gamers: I know you probably aren’t reading this. But The Ville, and SimCity Social, are not very good. They are games, don’t get me wrong, but I’m hoping we can do better for you in the future. It’s possible that you might have to meet games halfway a little – by being more willing to pay for a game or two, so that developers don’t have to design their games around tricks to fool you in to paying. I’m hoping we can find a way to work that out. I’m happy to have more casual gamers playing. I want people to understand there’s a point to making games for you, too. I hope for a future where you can still have ice cream factories, and blueberry pancakes, and love and friendship and all the happiness that you can hold.

7 Responses to The World Zynga Made