Outside the circle of people who develop games, a game “Jam” event isn’t really a well-understood phenomenon. When I told friends I was going to be participating in a weekend-long game event, their assumption, perhaps a natural one, was that I was going to be spending an entire weekend playing games. These sort of marathons have become more common. Often they’re done for entertainment; other times, to raise money for charity. I think overall, a weekend of playing games is more easily comprehended than the strange animal that is a game jam: a one-weekend development event.

So in case you didn’t already know, Global Game Jam is actually about taking 48 hours to make a game. The games can be made solo, but are typically made in small teams. It is not the only event of its kind: Ludum Dare is a 48-hour competition for developers which allows only solo entries, and lots of universities and conventions may hold jam events and competitions locally. Global Game Jam, however, is the largest event of its kind and attracts participants from all over the world. This year, according to the Jam website, there were 244 jam sites in 48 different countries.

When I tell people the event is about making a game, not playing it, the follow-up question I get is usually: “What are you going to make a game about?” I don’t know. The burden of that decision is, fortunately, not mine, but a choice decided on by the Game Jam organizers in advance of the competition. In previous years, the jam’s theme was something like an entire sentence. Lately, however, themes have been more simplified, allowing for more interpretation by the jammers. This year’s theme, which was revealed to us the first night of the jam, was the Ouroboros. Well, more specifically, the theme was this: 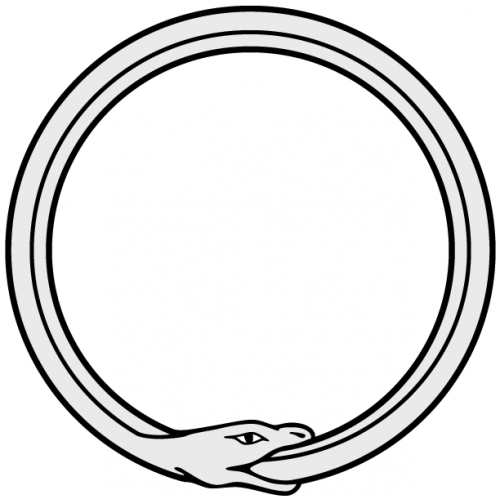 That is, a picture of the Ouroboros. Some games, including one at our site, utilized the picture directly as a graphic or gameplay element. Other jammers looked up its symbolic properties, and made games focused on the idea of death and rebirth. Other ideas suggested by the image are a kind of self-destruction, or perpetual motion. None of these interpretations were considered invalid. The theme’s real purpose is simply to spark the imagination.

“Who are you going to make the game with?” people asked. I didn’t know that, either. In fact, I came in to this Jam a stranger, but I knew I would meet like-minded people who had come to create. This year, I participated at Harrisburg University in Pennsylvania. The room was a mixture of students, teachers, professional developers, and game enthusiasts. We started the evening by mingling, then listening to the keynote speeches recorded specifically for Game Jam by developers around the world. For 2012, there were actually four keynotes recorded:  Will Wright, Baiyon, Gonzalo Frasca, and a joint keynote with Brenda Garno Brathwaite and John Romero, all of which can be viewed on the Global Game Jam site now that the event is over. Following the keynote, each site may have an individual key note or tech demos as well. At Harrisburg, local studio LightHammer showed us the basics of the UDK game development interface.

After a break for dinner, we then learned the theme, and got to work. In the first few minutes, everyone generated as many ideas as they could. Over the course of the night, ideas were slowly whittled down by interest and feasibility, and production began. Participants can create electronic games or board games, though everyone at our site chose a video game this year.

I’ve done the jam either as a participant or supervisor for the last four years. So the experience has taught me a few different things.

First is something perhaps better-said by Ian Schreiber, one of the global organizers, on his Twitter feed. It helps to have experience in the jam environment before. Going in, I at least knew what to expect, which helped toward getting a game that felt somewhat-finished after 48 hours.

That ties in to another important idea: scope. It’s difficult to create a big interactive 3D environment in that time, or a game that relies on a long, extensive backstory. A larger team could create a larger game, but larger teams also rely on a lot of communication and can be less agile, so there is a downside to that approach. However, it is a good place to iterate a small part of a large idea, and I’ve seen teams continue to work on their games at the end of the jam.

Prototyping and playtesting are huge. The team that most at our site felt did the best job overall, was also the team that had a working prototype of the game as early as the first night.  That gave them plenty of time to figure out if the game was fun yet, and to continue to iterate and polish the graphics.

Another thing I had learned from previous Jams was that I would probably want to sleep just a little. Two whole days can seem like a very long time. Thinking ahead, I brought an air mattress. Not thinking ahead, I didn’t bring extra batteries for the mattress’s inflation gizmo, and I ended up spending the first night on the floor anyway until I could go out and forage for energy.  To be honest, the thing I always want the most after 48 hours is a shower, followed by healthy food, followed by sleep. These are pretty much arranged in order of how difficult it is to get them if you don’t occasionally go home; you’ll sleep anywhere if you’re tired enough, but a shower is pretty specific. Some jammers do go home, which is the best idea if you are an adult and live close to the site. I like to think of myself as an adult, but the jam site was an hour from my apartment and driving on little sleep is difficult. So the mattress was a good idea… in theory. 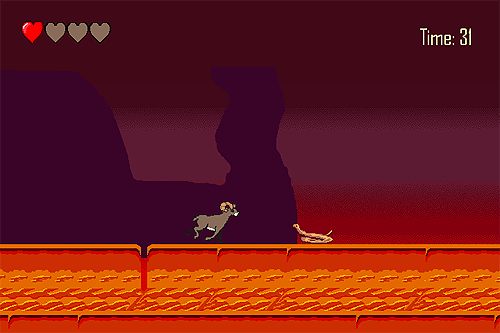 I’ll talk a little about the game my team made. It wasn’t the original idea that our group came up with, but we determined that a game with the kind of scope we thought of initially, probably wouldn’t be doable by our small team in the limited time. We had someone in the group who knew GameMaker, and I for one have been wanting to learn it, so I liked the idea of giving it a try. I’ve seen games using GameMaker get good results in a jam environment, because it works fast. As it turns out, I spent most of the weekend in Photoshop, but I still got some exposure to the software. From our original idea we ended up creating a run-and-jump game inspired pretty heavily by Canabalt and similar small platforming titles. It isn’t entirely bug-free, but it was a playable game, fun to make, and a good test of our team’s skills.

Every once in a while, there’s a game from the jam that captures the interest of the gaming press and gets a big chunk of coverage.  At the Nordic Game Jam, Petri Purho’s 4 Minutes and 33 Seconds of Uniqueness captured lots of interest for its creativity.  GNILLEY, made at Game Jam Sydney in 2010, was popularly celebrated as a fun Zelda send-up with a very unique control scheme. More recently, last December’s Ludum Dare got a lot of press coverage when Minecraft’s Markus Persson, AKA Notch, participated and made the web-based Minicraft. But, often, we don’t hear much about jam-created games in the game news.

I think that’s because… it’s not just about the games. For most of us, this event is about the process. It’s about the idea of getting together with people, old friends or new, and making something together. About the excitement and stress of quick iteration and collaboration. And maybe you’ll have a great game to share, too.

At the end of the night, some prizes were awarded at our site, but, globally, the Game Jam is not a competition. I for one hope it stays that way, and continues to be a collaboration: a celebration of learning with just a little bit of friendly competition in the mix. To paraphrase Gonzalo Frasca in his keynote, it’s not really important that you win. It’s just important that you “level up.”

For another take on the jam at the Harrisburg site, visit Andy’s blog, from LightHammer. To play some games, made quickly, but with love, just go to GlobalGameJam.org and check out what it has to offer! IndieGames.com also has a slightly curated collection, if you want to look at some favorites. I’d like to thank everyone at the Harrisburg site, everyone at all the other sites, and the global organizers for a great event!

10 Responses to Scenes from the Game Jam