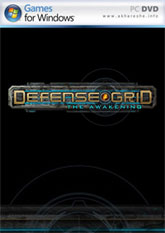 “While it tastes great, it is less filling. But for all that, it’s simply a joy to play, and I confidently recommend it.”

Not that I Would Ever Do This

The Tower Defense game, as a genre, was invented for one reason and one reason only: to kill time while at work. Cube sheep the world over have whiled away countless hours with Desktop Tower Defense and similar Flash-based, in-browser games, one eye on the clock, one eye on the game, employing automated gun towers to drive off ever-increasing hordes of invaders. Essentially, the entire concept of tower defense games are based around the idea that you stop playing them at 5:30 and go home. The beauty of the play format is that it’s easy to waste 7.5 hours on tower defense (that allows half an hour for lunch); there’s just something so engrossing, so enjoyable about carefully placing your towers, managing money and upgrades, studying enemy paths, optimizing tower positioning, and frantically clicking as the swarm inevitably overruns your position. But it ends at 5:30.

Still, with the popularity of the genre in the workplace, it was only a matter of time before someone tried to make a serious commercial game out of the concept. The question, though, is whether people would play it. Tower defense games are intrinsically silly and unbelievable; they’re what you do at work because you don’t have access to “real” games. And along comes Hidden Path Entertainment, demanding $19.99 for a tower defense game, when most of them are available for free through your browser. The nerve! How do they get away with such a thing? 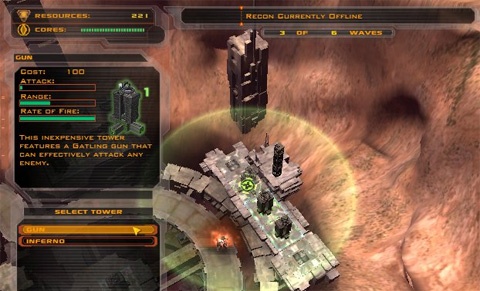 They get away with it because Defense Grid: The Awakening sports production values a quantum leap beyond those found in most tower defense games; not to mention ingenious level design, clever monsters, wonderfully varied tower options, and a storyline and characters so gleefully absurd that you’ll be in love at first click. The biggest complaint I have about Defense Grid is that I couldn’t take it to work and play it there. I had to settle for lesser tower defense games.

Defense Grid is great, and while I’d have liked it even better at $12.99, I don’t regret my purchase for a second.

Why the Thumb Up, then, and not the Gold Star? Well, price, for one. It’s really a ten dollar game. And also because I don’t know how much longevity Defense Grid will wind up having, despite the many alternative play options available. And finally, for a commercial off the shelf tower defense game, I’d have liked to see it innovate a little more beyond its browser-based brethren. It looks and plays far better, but there’s not actually that much different here. Mainly it misses out on the Big Prize because, while it tastes great, it’s less filling. But for all that, it’s simply a joy to play, and I confidently recommend it.

Tower defense is a strategy genre in which the player is tasked with protecting something – sometimes an exit, or in the case of Defense Grid, a pile of precious power cores that sit in a heap at a power station on the game board. In order to protect his charge, the player spends resources to build towers of different kinds: gun towers, towers that launch explosives, towers that slow time, towers that help nearby towers see better, and so on. Towers are typically invulnerable and have unlimited ammunition, but building them and upgrading their capabilities costs a lot of money, so you can’t just place them willy-nilly. 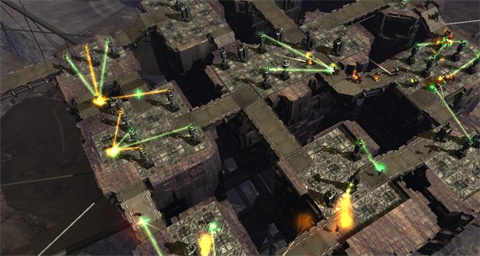 In Defense Grid, Mom, your adversaries are “aliens.” That’s all you ever find out about them and all you need to know. They come in different shapes and sizes, and they want the power cores. In each level, they enter through one or more points and trudge relentlessly toward their goal, taking fire from your towers as they go. If they reach the power station, they grab some cores and trudge relentlessly toward the exit, which may be the same way they came in or may be some other location entirely.

Aliens can’t pass through towers unless there is no other path available to them. The trick, therefore, is to place your towers in such a way that you guide the aliens’ path, so it takes them as long as humanly possible to reach the power station and as long as humanly possible to reach the exit. Because the longer their path is, the more time your towers will have to pummel them. And since you get extra cash by killing aliens, you can slowly upgrade your defense grid with better and better towers. Each level you must survive a set number of alien waves, then you move on to the next. 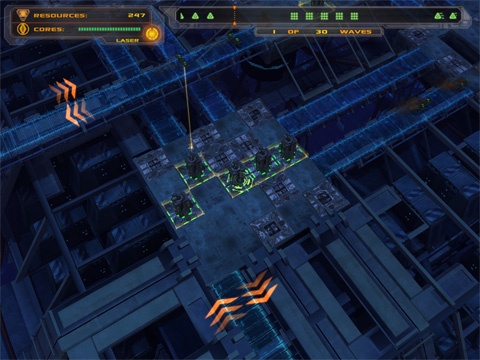 It’s a simple game, but highly addictive and often mind-bendingly difficult. In later levels your tower network must be perfect if you hope to stop them all. In the last mission of the game, my grid was a geometric marvel, a god-damned lattice of clockwork elegance, a perfect, perpetualized engine of Euclidean artistry shipped in direct from Planet Kickass. And even so, I only barely scraped through with a single forlorn power core remaining. And this is on my – count ’em – twenty third attempt. It was awesome.

And that’s really all there is to Defense Grid. What separates the good tower defense games from the bad ones is level design – where the aliens come in and out, where your vulnerable power station is, and where you can and can’t place towers. And in the case of Defense Grid, the level design is superb. Most levels have a right way to do things, but YouTube reveals the many dozens of equally effective alternative solutions to each mission. Better still, Defense Grid is never so hard that you get stumped, and never frustrates you. Yes, it took me 23 tries to finish that last mission, but each of my approaches was subtly different. On number 23 I hit the perfect combination of layout and tower type.

Tower defense games are absurdly unrealistic even as abstractions. As such, they are inherently silly. Knowing this, Hidden Path produced in Defense Grid a tower game of surpassing goofballery, the levity contained in the one speaking character in the game: a batty, John Cleese-sounding computer into which the consciousness of the previous grid commander was uploaded a bazillion years ago the last time the aliens came. While the computer is of no real use, the completely inane things it sometimes says are priceless. Some have compared this computer to the distorted ramblings of Portal’s GLaDOS, another game that knows not to take itself too seriously, but in truth the pair are about as unlike as anything can be.

Defense Grid is a battle of wits and geometry. Herd the aliens along paths of your choosing to optimize the amount and type of fire they receive – pound distant foes with slow but far-reaching Meteor and Cannon Towers, for example, and once they get closer expose them to the devastating-at-close-range Laser and Tesla Towers. You might even drop a Temporal Tower nearby, to slow the aliens as they pass and keep them under fire longer. There’s a lot of strategy not only in where you place, but what you place, when… plus you need to watch your funds and manage regular tower upgrades. And unlike the free Flash-based games, Defense Grid sports a luscious 3D playfield that often has aliens marching in from above or below you. The result is an experience that never gets bogged down in serious exposition and keeps you on your strategic toes. 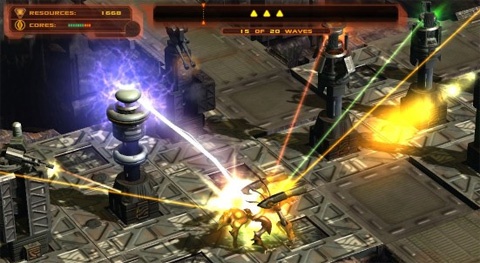 A Crasher alien rides the lightning, courtesy of the mighty Tesla Tower.

That 3D playfield is powered by the Gamebryo Engine, a third party codebase from Emergent. To give you an idea of how incredibly diverse this engine’s capability is, consider this: Gamebryo was also used to create Fallout 3. Now that’s some scope; something I wish developers would consider more often when choosing a third party engine, rather than automatically leaping on the Unreal bandwagon; especially since that engine really can’t produce anything but shooters.

I bought Defense Grid kind of on a whim, because I’m amused by tower defense games at work and I really liked the demo. It’s available from the big digital clearinghouses – Steam, Direct2Drive, Greenhouse, and Xbox Live all have it – and it wouldn’t surprise me if we see a price drop in the near future. Defense Grid has been very well received and sold quite satisfactorily. Given the recent revelation from Valve honcho Gabe Newell about what happens to sales of Steam-delivered games when they cut the price even a little, I think the folks at Hidden Path will soon try to capitalize on their word of mouth success.

A friend recently commented that there’s “something about” games in which you build things – towns, skyscrapers, defense grids, whatever. The construction, organization, symmetri- ah, zing, and perfectionificiation of your subject is both hypnotic and soothing at a very core level. Even Tetris demonstrates it to a certain degree. Most people seem to really get fulfillment out of their attempts to build something elegant.

Defense Grid: The Awakening is tailored to take advantage of that conceit, and does so very well. Is there that much to it? No. But what there is is delightful, which is really all you can ask for.

8 Responses to Defense Grid: The Awakening