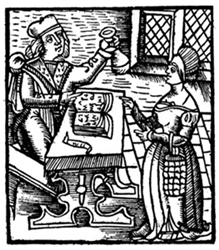 Personally, I never buy the stuff. Only use what is lying about and even then, I find myself carrying too many spares.  Always thinking that around the next corner there will be a worse Boss fight.  Wait a minute…are we not on the same page?

Potions! I’m talking about potions, whatever their promised benefits.  Makes no difference, I cannot remember to drink them. Not in order to buff up, not in the thick of battle. Mind you, I’m all in favor of potions. My World of Warcraft herbalist/alchemist made a fortune collecting, brewing and selling to others so I can appreciate the need. It’s just that being a hoarder by nature (another post, another time) who rarely drinks, potions invariably accumulate over time. Managing red and blue stacks with an occasional green isn’t too difficult as it’s easy enough to see what can be sold off.  It’s games with specialized pharmacuticals that cause me trouble.

For example, let’s look at Sacred 2: Fallen Angel, a game I installed during Gamer’s Drift. Very early on I couldn’t help but notice how many bag slots were occupied by tiny colored items, apparently potions. Six different potions and I’m only level 7?  Out of curiosity I visited the  Sacred 2 Wiki for clarification. In the interests of research I present my findings:

Five types x three strengths = fifteen potion types. Without major effort, there is no way I can keep track of so many. I decided to continue Sacred 2 at another time and moved on to…..why don’t I let you guess what game? It’s a cRPG where the main character has long white hair and wears a chest belt with of all things, potion sockets!

You win. Ironically I’ve settled into playing The Witcher. A game where potions and oils are a major part of battle preparation, not to mention identifying, collecting and creation associated with such concoctions.  While this may seem problematic enough for an historical abstainer, it’s only part of my learning curve. The days of logically color coded drinks are fond memories.  Now I must recognize names like Maribor Forest and White Raffard’s Decoction.  Over time I will learn, and adjust. In the meantime, gotta go.  I challenged a peasant to a drinking match but first I must see about brewing up some Wives’ Tears (neutralizes intoxication). Such is the life of a Witcher.

11 Responses to Superficially Relevant: Do You Drink?

He Could Only Rule the World