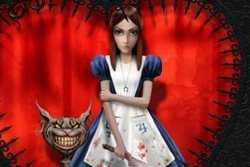 Has it really been nine years? My, we’ve missed you, Alice. One of my favorite games after the turn of this new century was American McGee’s Alice. His bizzare interpretation of the classic tale was colorful, inventive and frightening!  I still have a little Alice doll, with cat “friend,” sometimes used to scare the grandkids.

One of the key lines from McGee’s Alice: “How do you know I’m mad?,” was felt by some to be the designer’s reference to himself. By the way, the Cheshire Cat’s reply to this querie was: “You must be, or you wouldn’t have come here.”

We’re delighted to see that EA has announced a publishing deal for an all-new version of the game – a “dream come true for me,” says McGee. Describing his original effort as “beautiful and daring” (I would wholeheartedly agree), McGee predicts this new trip through the Looking Glass will be “even more exciting.”

From the concept art picture, Alice’s new journey, accompanied by her trusty blade, will be one we’ll be sure to take. The game should be out sometime in 2009 for XBox 360, PS3 and PC platforms. I can’t wait!

4 Responses to Alice Returns To Wonderland