I took some time out of my extraordinarily busy Fallout 3 schedule to download the Mirror’s Edge demo on XBLA. This is a game I’ve been watching for some time: the austere art direction really touched a chord in me, and I was intrigued by DICE’s commitment to producing a momentum-based first-person platformer… essentially, a game that plays like Prince of Persia, but feels like Quake, since you’re in the first person driver’s seat.

After some initial dubiousness about the controls (left bumper to jump, left trigger to duck… strange indeed), I began to get the feel for the game. Like the team behind Assassin’s Creed, the developers at DICE seem very focused on building an organic sense to movement by controller – something that you rarely see. I mean, yeah, we’re used to the general tenets of movement in first or third person, but those mechanics don’t necessarily feel natural. In Assassin’s Creed and, now, Mirror’s Edge, they do. 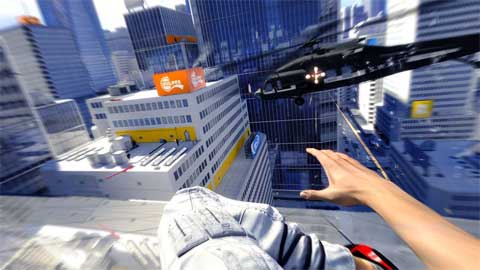 The difference is that in Assassin’s Creed you loved the controls until you needed them… and that’s when they failed you. Worse, as cool as Altaïr often looked doing his moves in AC, for the player it was often a matter of holding down A and the right trigger at the same time. You weren’t in the game, you were watching the game, all too often.

Not so with Mirror’s Edge! As strange as the controls feel at first, they’ll soon be very natural, and you’ll be running and jumping and sliding with the best of them. And the level of control is far more granular than we saw in AC. All in all, the demo – which is only about 20 minutes of play – sold me on the concepts that DICE has been working toward… which is to say, the idea of a first person experience where you feel the movement is definitely possible and very exciting. I was actually rather breathless after I finished the demo.

The PC release of Mirror’s Edge has been pushed back to January, but the console versions ship on 11/11, with a certain street date of 11/13. While I’d originally planned to hold out for the higher-res PC issue, recent complaints about controls in the PC version of Dead Space, EA’s other big Xmas release, have made me leery. Dead Space is getting good reviews on consoles, not so much on PC. I might just have to bite the bullet and grab Mirror’s Edge for my 360.

Expect a review of this newest game from Swedish developer DICE from yours truly in the weeks or months to come.