“The fifth Carol Reed mystery continues the unusual, intricate and suspenseful story telling of one of our finest independent adventure game developers. Moreover, this time the Nyqvists have also incorporated one of the best progressive hint systems yet seen. We’re pleased to award a Gold Star to this exemplary production!”

“Nothing Happens This Time Of Year. Maybe I Should Take A Vacation” – Stina

Our intrepid heroine, Carol Reed, has only three days until her much anticipated Midsummer’s Eve celebration. One of her allottment neighbors, however, suspects that his son may be involved in a murder and asks for Carol’s help. Given her natural inquisitiveness and reputation for crime solving, how can she say “no!”

The opening screen, with rain falling lightly in an alley at night, coupled with a forboding musical theme, gives a good indication of the tone of the mystery to come.

Carol’s inquiries and travels in and around the city of Norrkorping, Sweden will lead her to about twenty locations ranging from a Theatre Workshop to a Marina, a Moral Mission and, most interesting of all, a Petroglyph site. Her conversations will be with an interesting selection of characters, from the familiar Stina to a sly Moral Mission representative to a creepy custodian at the National Tax Board. Generally, though, Carol is a loner, probing and searching for clues in buildings, sites and apartments on her own.

“There Are Probably Some Useful Items Up There” – Carol

The Colour of Murder is done with first person POV. We never see Carol, nor does she orally speak questions to others. But, she does occasionally mull over problems to herself, as with the above line. Fixed scenes, representing thousands of photographs in and aroumd Norrkorping are beautifully done. Transitions between scenes are quick and easy and, generally, you can get to an area you see without too much difficulty. 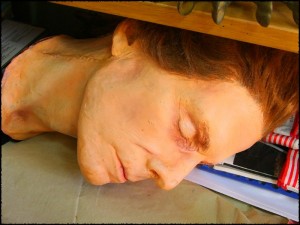 System requirements are the same as with Carol Reed # 4, East Side Story, with the game running smoothly, full 24″ screen on my Vista PC.

The game is completely mouse driven, with arrows clearly showing available paths. The cursor becomes “hot” when an object can be picked up, examined more closely or added to Inventory. That Inventory, holding typically about 20 objects, sits as a drop-down at the top of your screen. Left and right mouse clicking allows use of an item in a setting or possible combining of items. On your screen, a gear symbol shows the need for an Inventory item, such as a key to open a locked door.

For novices, the Nyqvists have included not only a helpful manual on the disc, but also a brief interactive tutorial in the game itself – a very nice touch!

The major gameplay addition to this series, though, comes in the form of a Notebook, located at the far left of the Inventory. Notebooks are usually used in games to record progress. However, in The Colour Of Murder the notebook is transformed into the finest progressive hint system I’ve ever experienced. Moving dynamically along the paths of this fairly non-linear game, this Notebook will suggest places to visit next on the left hand side plus, if you choose, a more definitive hint on the right hand side. So, for example, the left side may suggest that it would be a good idea at this point to visit Harald’s attic while, if you wish further guidance, the right side offers that the lock pick you recently acquired could be used on a mechanism in the attic. Of course, none of this needs to be consulted, but I found it an invaluable tool, rarely needing to consult Len Green’s excellent walkthrough. The Nyqvists ought to patent this system. I’d love to see it in every adventure game I play! 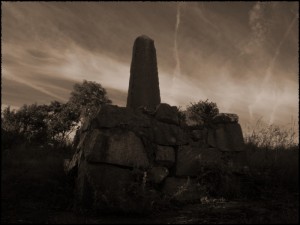 Quick transition between sites is facilitated by a Map system which opens up whenever you exit a particular locale. New locations on the Map are, in turn, opened/triggered when you complete a series objectives. When this occurs, a little chime is heard, together with a momentary flashing Map symbol in the top left of your sceen. You can save anywhere, except during conversations, with 96 slots being available.

“Do You Want To Leave Carol Here?” – Prompt with Save Game

No, I don’t, but we are trying to keep our reviews to a reasonable length! I’m grateful to the Nyqvists for an early Gold Master and what is likely the first review of the full game. The Colour of Murder is an outstanding detective-adventure. As always, we are treated to a virtual tour of a city unfamiliar to most of us. With this episode I was particularly impressed by the Petroglyph site – a real location, thousands of years old. One can explore at leisure, and it’s well worth the time. Less interesting exploration-wise was the Theatre Workshop, a habitat of artistic, right-brain folks who believe in mess and clutter. I don’t know how they can find anything and, thank goodness, Inventory management only allowed us to pick up the items we needed!

But, finally, it is the mystery itself that will really win you over. The story is fascinating, clues are intriguing, the progression is tense and compelling. One of the advanteges of the new Hint system is that you can move along without being stuck for hours or days with a particular puzzle. These puzzles, largely Inventory based, are generally logical and contextual. Yet, the story, with historical overtones reaching to the Swedish Royal Family is what you will remember the most.

7 Responses to The Colour Of Murder – First Full-Game Review