Shadowrun Returns gave me very much what I wanted, and I can mostly only fault it for leaving me wanting more.

There are two kinds of people in this world, chummer: those who know the shadows and those who don’t.  Me, I’ve been running the shadows for ten years.  I’ll never forget when I first hit the big leagues, a run down through CalFree to Mount Shasta.  Yeah, that Mount Shasta.  You’d think my biggest worry would be the Orange Queen herself, dragons being what they are, and she probably would’ve been, if my team hadn’t included a particularly astounding bakebrain of a troll shaman.  Things came to a head and our samurai had to take her arm clean off with a monowhip.  AMF, Grace.

By some accounts, though, I’m still a relative newbie.  Shadowrun‘s existed in some form or other since forever (or 1989).  It began, and continues to primarily exist, as a tabletop roleplaying game, now on the cusp of its fifth edition.  Previous adaptations exist, like 1993’s Shadowrun for the SNES, a well-received noir RPG, and a Mega Drive title which shares its name but is a different game from a short time thereafter.  I could, I suppose, mention 2007’s online-only FPS for the Xbox 360, but I’d rather double-cross a Great Dragon.  Again.

If you’re coming from previous experience with Shadowrun, then Shadowrun Returns ought to be very much for you.  If you aren’t, then it’s a fine gateway drug.  Where that 2007 miscarriage of all that is good in the world felt like a license haphazardly slapped on a game just for the sake of selling a few extra copies, Shadowrun Returns feels like a game made for fans of the material and with a respect for (and pride in) that material.  Indeed, with Jordan Weisman, one of Shadowrun‘s originators, at the head of Harebrained Schemes, this is a property that has gotten the rare opportunity to return to the hands of one of the people who made it work in the first place, and what good hands they are. 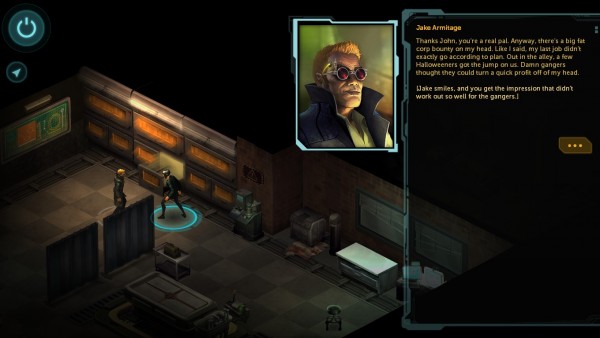 Fans of the console games will encounter some familiar faces.

In the world of Shadowrun, magic returns to the world early in the 21st century.  The idea is that magic comes and goes in cycles, and that whole end of the world in 2012 thing just marked the end of the Fifth World, this most recent magic-less cycle to which all recorded human history belongs.  Shadowrun‘s is the aftermath, the Sixth World, where magic and high technology coexist for the first time.  A portion of the population “goblinizes,” leading to variants on humanity that resemble classical fantasy races like elves and dwarves.  As computer technology advances, megacorporations take on greater power than any world government, and the whole of the modern world gets very dystopic.  Dragons reappear, and some run megacorporations now.  Some run for president.  As you do.

Shadowrun Returns is a somewhat retro isometric RPG, reminiscent of its 16-bit predecessors.  Your character is built from the stable of options a good ‘runner would expect, which is a wider selection than existed in the older video game translations.  Options include prebuilt versions of the mage, shaman, and adept, all magic users who employ their magical abilities to accomplish different effects; the street samurai, a mercenary type using the best tech and firepower available, including heavy cybernetic implants, the rigger, who controls a small army of attack and support drones with his brain; and the decker, the Sixth World’s equivalent of a hacker, master of the Matrix (before that name drummed up images of Keanu Reeves dodging bullets and wallrunning).  Intrepid players can build their character from scratch, instead, distributing karma, the game’s experience points, between several attributes and skills.  The system is not taken directly from Shadowrun‘s tabletop ruleset, though the terminology remains much the same; the overall result is an effective middle ground between the easily overwhelming direct translation of such a ruleset (as seen in some Dungeons & Dragons games, for instance) and the lightweight RPG elements of something like Mass Effect. 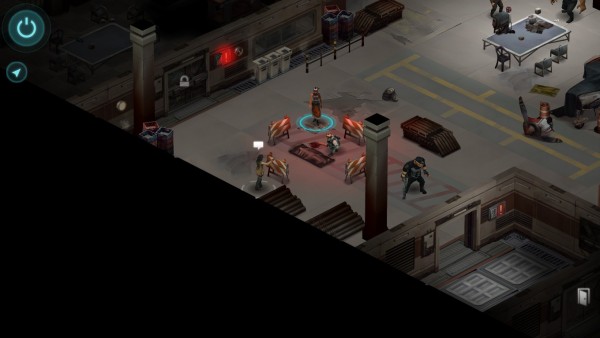 Grisly murders and corrupt cops are only the beginning of your troubles.

Your ‘runner is pulled back into the job after being down on his (or her) luck for a bit by a call from an old ally, an “in the event of my death” video message offering a big payday to track down the person responsible.  What begins as a street-level noir-by-way-of-Gibson gradually spirals into a greater threat.  While it lasts the mystery is fine, and only the first act, really, of the game.  By the end Shadowrun Returns offers a whirlwind tour of several disparate parts of the setting and offers up a colorful and well-written cast.  Much of the game is spent in conversation with these characters, using a fairly familiar implementation to any modern RPGer, including optional responses unlocked by having certain stats, skills, or items.  Despite the lack of voice acting, the amount of reading doesn’t generally feel excessive, perhaps because the writing’s usually so flavorful.  It also includes lots and lots of nods and references to other Shadowrun stories, including the ’90s games, and parts of the setting that never take center stage within Shadowrun Returns.

Being essentially guns for hire, shadowrunners not infrequently have to fight their way through things, be they guards or thugs or supernatural creatures.  When combat happens, the game becomes a turn-based tactical RPG, pitting your team of up to four ‘runners against whatever enemies the current run has thrown at you.  Each character has some number of action points (AP) with which to take actions, whether firing a weapon, casting a spell, moving, reloading, or using some special ability granted by the character’s progression on his or her skill trees.  There’s plenty of cover to dive behind.  Characters are fragile enough to be taken down by a few good hits, especially if they aren’t statted particularly for toughness.  Healing options are available but not as widely flexible as in many comparable games, such as the healing spells that can only heal damage from the most recent attack.  Different weapon types give different firing options, and bringing spirits or drones into battle to help give you an extra edge can be helpful – though both come with certain risks.  To the game’s credit, each character type feels a bit different in combat – if not wildly so – and no type feels like it is hands-down the most powerful option. 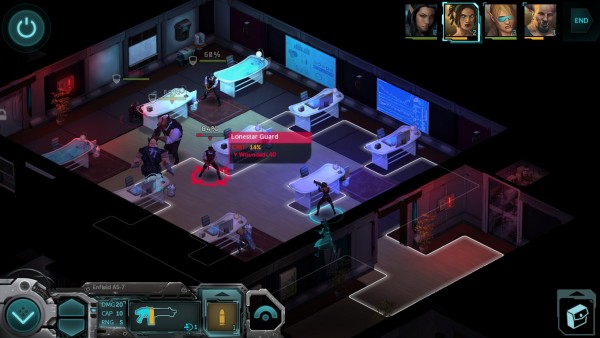 It’s in the XCOM-lite combat that Shadowrun Returns falters most, for two reasons.  First, it never gets very difficult.  There are a few tough late-game encounters, but that’s almost exclusively because of numbers, not because of smart enemies, and it’s pretty rare to see enemies bring to bear some of the options that should be just as available to them as to you (enemy riggers and deckers, for instance, are seen only maybe once or twice in the entire game).  The best encounters involve battles going on simultaneously in the real world and the Matrix, as the team’s decker tries to break through security systems while the rest of the team defends his unguarded meatsack from guys with guns.  Second, it feels like it’s built to operate on various platforms, and in playing it’s pretty obvious that one of the lowest common denominator here is mobile.  For a mobile game Shadowrun Returns is pretty competent, but PC players ought to be forgiven for looking for a bit more depth in the combat.  There’s something to be said for the combat’s quick and brutal nature, and really making it sing would probably only require some minor tweaks, but the problems exist.  Those looking for a terrifically compelling tactical RPG experience in Shadowrun Returns will come away disappointed. 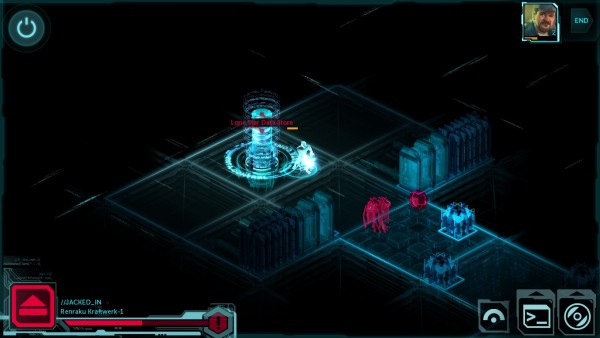 Bypassing security systems through the Matrix is similar to combat in the real-world.

The game also suffers, by some measures, in its linearity.  The campaign is highly linear, lacking the ability to explore more than one section of the world at a time, and where you’re headed next is basically always chosen for you.  There are, in most areas, optional sidequests of some kind, but that’s as non-linear as the game gets.  Considering the modest scope of the game and the fairly budget-conscious price point this is understandable and ultimately forgivable because things are paced pretty well, but to some players who rely on open-worldness to engage them, Shadowrun Returns is only going to frustrate with its structure.

For the price, though, I think it’s a good package, not a mention a much-needed Kickstarter success story.  The main storyline takes around 10 hours to complete, including sidequests, but Shadowrun Returns also includes solid UGC tools that will, hopefully, start to spawn more quality shadowrunning adventure in the near future as players put their own efforts out there.  As with any mod community it’s difficult to be sure exactly how much this part of the game will ultimately pay off, but I’ve got my fingers crossed for some good content.

Overall, what Shadowrun Returns delivers is an enticing trip back to 2050s Seattle, properly, for the first time in nearly two decades.  As a fan of the setting in general, Shadowrun Returns gave me very much what I wanted, and I can mostly only fault it for leaving me wanting more.