The presence of Dungeons & Dragons was felt throughout the long, broad halls of Boston’s PAX East convention this past weekend. Wizards of the Coast brought with them this year the traditional tabletop offerings, running tables of D&D Essentials  and the new Lords of Waterdeep board game in the convention’s table gaming room. But Dungeons & Dragons also means video games these days. In addition to checking out some new content premiering for the existing Dungeons & Dragons Online, I also got a first look at the newest D&D MMO, which is simply called Neverwinter. My thoughts on the latter lead off a series about the things I saw this past weekend at PAX. 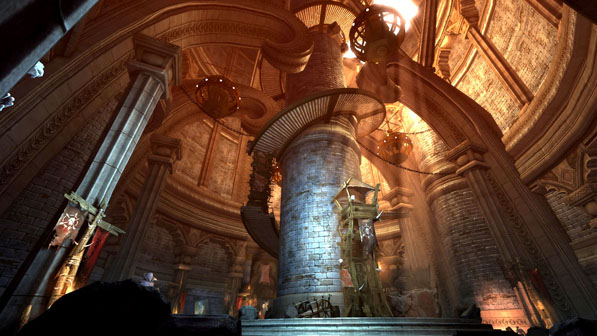 Those who know D&D primarily as a video game franchise may recognize the name Neverwinter from the PC RPG series Neverwinter Nights. Though the new Neverwinter MMO is set in the same universe — Faerûn, which is better known as the Forgotten Realms — it is not actually a sequel to those games. Rather, Neverwinter, the MMORPGer, is set in the Dungeons & Dragons Fourth Edition timeline, after the Spell Plague ravaged the world and rebuilt it into a slightly-more Fourth-Edition-compatible place to be. Because of this, the game locations, such as Neverwinter and Waterdeep, may feel similar to D&D experts. But they’re also going to be different, so encyclopedic knowledge of the universe won’t really be a requirement. 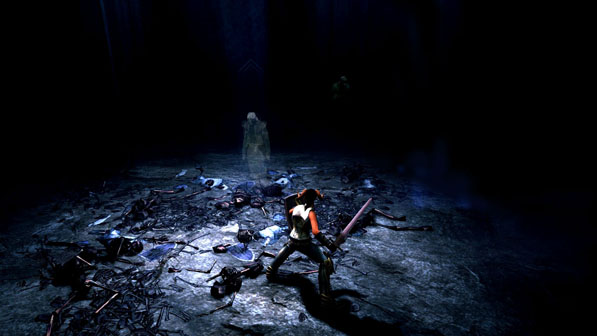 The racial selection in the game will feel familiar to D&D Fourth Edition players as well. The combat demonstration that we watched was using a Tiefling Control Wizard, showing that the devil-like Tiefling, a Fourth Edition staple, will be a base playable race. Other races I saw include of course Humans and Dwarves. Elves, Half-Elves, Drow, and quite possibly Dragonborn PCs will also exist in the game.

Craig Zinkievich from Cryptic, who was on hand to run the demo, was really careful to specify “Control Wizard” when referring to the character’s base class. He explained that certain classes will be able to choose different build structures, so there would actually be more than one way to play something like a D&D Wizard or Rogue, a bit like the different build options players have in the tabletop game. Despite the team-focused role labels used in recent D&D iterations, this game is going to be designed to be solo-friendly too, with plenty of options available for players who want to go it alone. 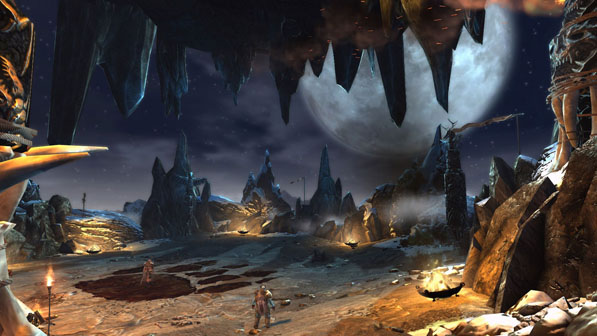 This is due partially to the game’s action combat system. Rather than the typical target-and-click style of many MMOs, Neverwinter uses an active targeting system. Mouselook is automatic; point the targeting reticle in center-screen at the creature you want to target, and click to fire. With the Tiefling Control Wizard, this is almost like playing a third-person shooter: just aim the reticle, use your “At-will” Magic Missile, and keep using it until whatever you’re pointing at is dead. The Control Wizard also has various Encounter Powers in her tray. These are on cooldowns, but there is no mana bar. When the power recharges, she can it right away. A Daily Power can be activated by filling up a meter in the center of the HUD that looks like a 20-sided die. The meter fills up as the character performs her role in combat. A defense-oriented character might charge meter by holding enemy agro, a control-oriented character by locking down enemies, and so-on. When the die-shaped meter is filled, the Daily Power is ready for use. You can use the power as often as it queues up instead of once-per-adventuring day. But like in the tabletop game, the Daily Powers are big, spectacular novas that can clear out a lot of enemies at once. Your At-Will power is going to be enough to take out most Minions, but you may have to queue up your Daily if an Elite heads your way.

Sorry: that’s Fourth Edition jargon I just laid down on you, but it’s also exactly how the game was explained to us in play. When I asked about this, I was assured that, despite the use of a Fourth Edition setting and heavy steeping in Fourth Edition mechanics, Neverwinter is not merely a Fourth Edition game but a true Dungeons & Dragons game that takes inspiration from other editions as well. That being said, given the terminology used and the direct references to the Spell Plague also present in Fourth Edition Forgotten Realms suppliments, I don’t think saying Fourth Edition is the primary inspiration is really going out on a limb. But make no mistake: I love Fourth Edition Dungeons & Dragons. I like the tactical combat, the varied encounter generation, and the clear character roles. I even like the heroic power level of the individual characters, the stripped-down skill list (at least most of the time), and the nerfed multi-classing. 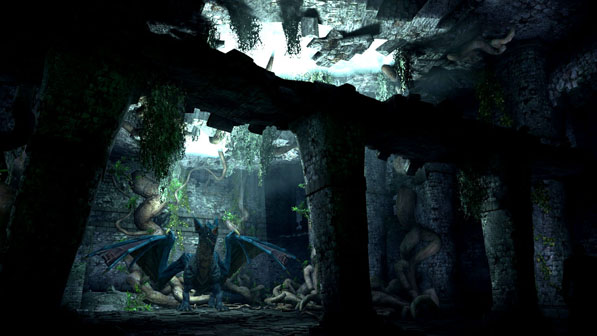 But before I go off on a gushing tangent, let me lay down some more facts. Neverwinter is being developed by Cryptic Studios, and published by Perfect World Entertainment.  It will be free-to-play. It will have public missions as well as instances; team dungeons as well as soloable quests. Right now, party size is capped at five players, though that number may change as testing continues. Characters are likely to be fairly customizable, with stat-effecting and cosmetic gear. Intriguingly, Cryptic is also teasing a content creation engine for the game, that will allow players to create their own dungeon adventures for their friends. It’s a bit of a throwback to the old Neverwinter Nights customized D&D game, only with full 3D graphics and action combat. It’s a cool feature for a “screen monkey” like myself, who loves to create customized adventures. The game even has an in-game calendar feature that will allow players to schedule regular sessions, either to do raids in the game, or play it together on regular days just like gamers might organize their own home campaigns.

Check out Neverwinter’s official site, at www.playneverwinter.com for beta testing information. I’m hoping to get in to the beta myself, and try it out full-scale when it’s ready. The projection now is for this to happen later this year, though a few things about the game, such as a final list for available class builds, are still being finalized.

I’m not done here, by the way, but this feels like a good place for a little break. I’ve got much more Dungeons & Dragons to discuss, and with great enthusiasm! Tomorrow: my thoughts on D&D Next and the Future of Dungeons & Dragons. For now: here are some more pretty screenshots of Neverwinter. With these, and the shots above, you can click for full size. 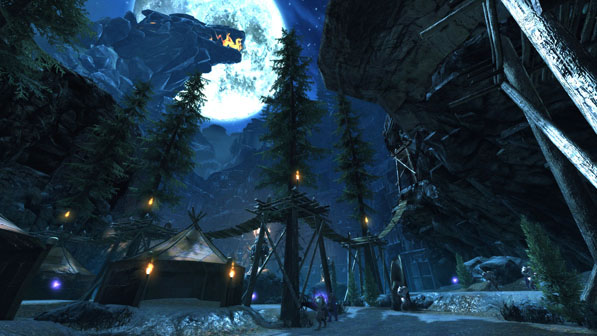 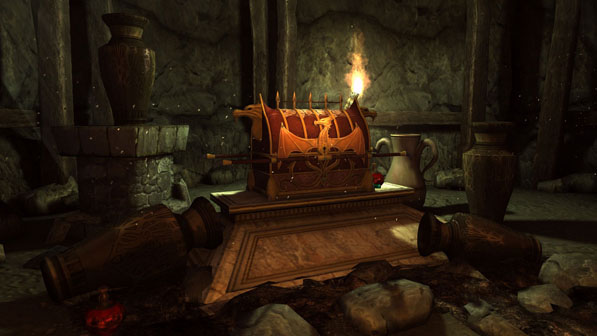 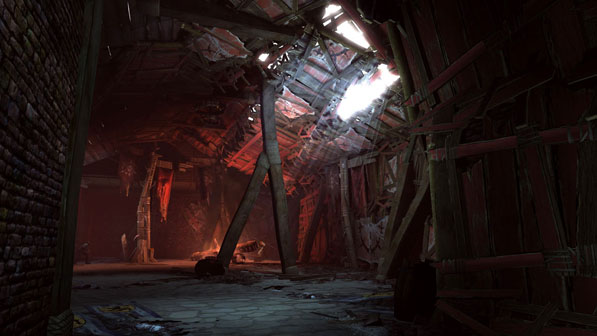 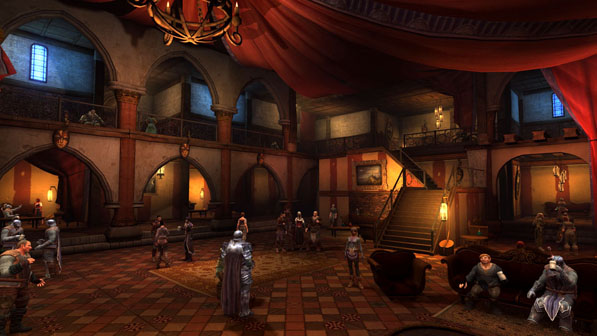 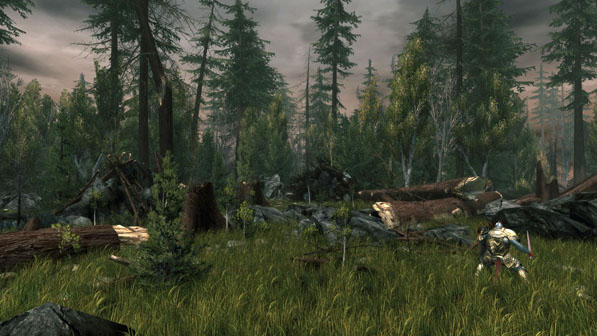