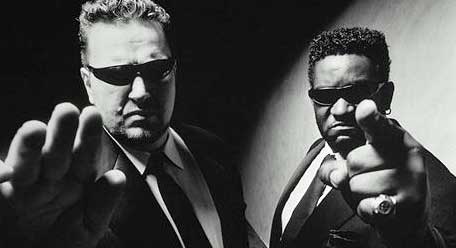 So check this out. It would seem some large and scary dudes showed up at Modern Warfare developer Infinity Ward’s Encino offices and… lurked. Apparently they’re a gift to the studio from owner and industry goliath Activision/Blizzard. Meanwhile two of the company’s top dogs, Vince Zampella and Jason West, weren’t in the office – they were at Activision. In a meeting. Now we hear that CTO/CCO West, at least, has been fired.

Activision recently made a SEC filing indicating that it was investigating human resources mismanagement and insubordination at one of its studios, and that this would likely involve terminations and litigation.

No one knows what is going on. Some inside Infinity Ward – one imagines them crouched under their desks, avoiding the steely gaze of their thuggish guests, desperately Twittering in the glow of an iPhone – have indicated that Activision is “flexing its muscles” in response to IW’s attempts to “push back against change.”

UPDATE: a bit more info from GamesIndustry.biz. Apparently West and CEO Zampella are both out.