Last week saw the release of Moebius: Empire Rising, an adventure game along the vein of Gabriel Knight, with some of the same pedigree. Specifically, the game is written by Jane Jensen and developed through her Pinkerton Studios label, though it’s published by Phoenix Online Studios. Phoenix Online previously worked on the Cognition series that I found so compelling last year, so I’ve been following their other work and I previewed a lot of their games at GDC this year. I was looking forward to Moebius when it was announced, and let me just say: this is an interesting one. But not at first glance. You have to dig deeper.

Moebius has a lot in common structurally with the Cognition games. Developed in Unity, using some of the same tools developed for Cognition, Moebius seemed instantly familiar to me on that front. Moebius is a globetrotting, urban fantasy style adventure game. It stars, primarily, a tall well-dressed hero named Malachi Rector: a protagonist that is sort of part James Bond, part Indiana Jones, and part Benedict Cumberbatch’s Sherlock. (Well, okay, Malachi is a lot of Benedict Cumberbatch’s Sherlock, but from what Jane Jensen has said about it the similarities are purposeful. More on Malachi in a bit.) 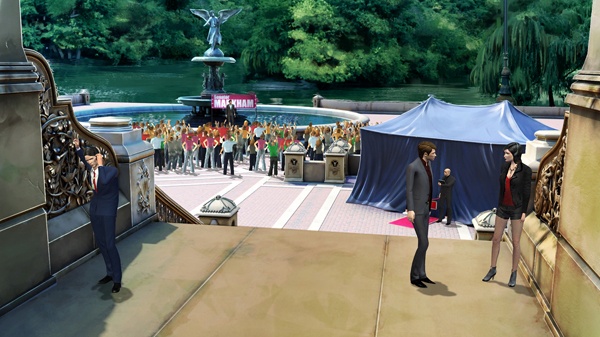 Moebius is an adventure game of the classic point and click variety, with some pretty light puzzles, dense dialogue trees, and inventory management. It’s not a particularly difficult game by adventure standards, but there were a few times when I felt stuck just because the next action I had to take felt arbitrary or I wasn’t sure what my goals were. There’s something a little “newschool” about the design: Malachi won’t just pick up any old item he stumbles across unless he has a use for it, meaning that occasionally some backtracking is required. This makes sense as an attempt to add some logic to adventure game kleptomania, but it replaces it with kind of a different sort of illogic. “Wait, I need scissors now. Where did I see scissors last? I’ll leave this other scene already in progress to go get the scissors. Hot lady, you keep distracting that other dude, possibly forever.” This hits its height-of-weirdness in the penultimate chapter when you’re given access to two cities at the same time and have to occasionally fetch objects from one to take to the other, mid-conversation. Sorry, hope that wasn’t a spoiler.

Here’s another spoiler: the last chapter is a bit dull. I’m not beyond cross-linking reviews I liked, so here’s Richard Cobbett’s take, which was linked from Rock, Paper, Shotgun but which I only watched after completing the game. If you don’t want to see footage of the last chapter of Moebius, please don’t watch that video, because he does show it. But quite frankly that is a department in which you are not missing much.

The video review also delves a little deeper into the core plot of the game, and some of its unique puzzle segments. Malachi can use his photographic (Sherlock-like) memory to figure out things about people and objects by matching them to things in his mental database. By comparing a person with a historical figure or archetype, he can learn more about that person than initially is obvious. Malachi’s ability to match people to historical figures turns out to be a key to the plans of a shadowy government agency, and thus the call to adventure. 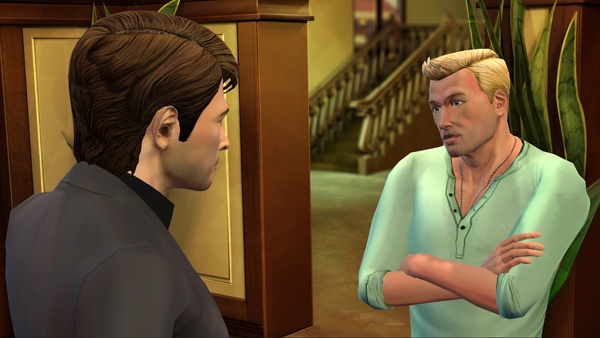 The emotional core of Moebius: Empire Rising is the somewhat unlikely relationship between Malachi, the brains of the operation, and his sidekick, Captain David Walker. David is a former Special Forces soldier who offers the game a taste of two-fisted pulp action. In the brief segments where the player gets to control David, it’s likely that something is going to be climbed, or someone is going to get punched. The relationship between the two men is ripped straight from primetime, in that ambiguous-sexualty sort of  “bromance” way. David never answers about whether he’s straight or gay, and Malachi flirts with women, but only to his own ends, so the tension is allowed to hang. Make no mistake here: Moebius is one for the ladies.

And that’s what’s interesting about it to me. But that’s also what means it might not find its audience in the current market. There was a time when Myst was packaged with new PCs purchased. During that time, a lot of people – and a lot of women – played adventure games. They – well, we, though I was younger then of course – appreciated their slower pace, their contemplative natures, and deeper game stories. The possibility of a swarthy protagonist voiced by Tim Curry didn’t really hurt matters much either. The gaming atmosphere is a bit different now.

Jane Jensen wrote a blog post on Gamasutra last week discussing the kind of male protagonist she likes to write. It was on the front page for a while, but it seems to have been de-listed. Comments, which you can still read there, were majority negative. People thought her advice was too prescriptive, it seems. But I feel there’s something more. I remember seeing similar responses to Everlove when it came out. There’s an attitude that writing to appeal to straight women is somehow talking down to them. And if someone writes “here’s what appeals to women,” without being very specific about what kind of woman, the immediate response is that they’re making unfair generalizations because not all women are interested in the same things. It also seems it’s just cool to hate on whatever game “average women” might be interested in, be that the Facebook game trend or casual game trend or the adventure games in the 90s. So when someone says something “appeals to women” they have to be careful about the ground they’re treading on, but it can feel like it requires excessive care and that’s very frustrating, at least to me as a straight woman who likes to have nice things.

I mentioned last month that I saw a talk at GDC about how to add hot men to games. Now it’s in the GDC Vault for free! You can watch it! Michelle Clough kind of rushes through her final slides at the end, but I can forgive her that. She had a lot of content for a limited time, and had to use up a lot of her talk trying to convince people that writing appealing men for a straight female audience is okay. Moebius is in part that advice, put to action, but commenters on Gamasutra seemed upset when Jensen was upfront about it. Pop culture – shows like Sherlock and even movies like The Avengers – seems to be catering to women a lot in even what seems like male-focused series. But (at least American) video games still seem uncertain about specifically evoking straight-woman appeal. Sorry-not-sorry for inserting a mini-rant like this into a review, but I think this is an important point that a lot of people seem to be missing about the Malachi character and his relationships. Malachi is a bit of a dick because some of us ladies like dudes that are a bit dickish, ya dig? Like maybe that’s not the guy we’re gonna marry, but he’s fun to watch at work. 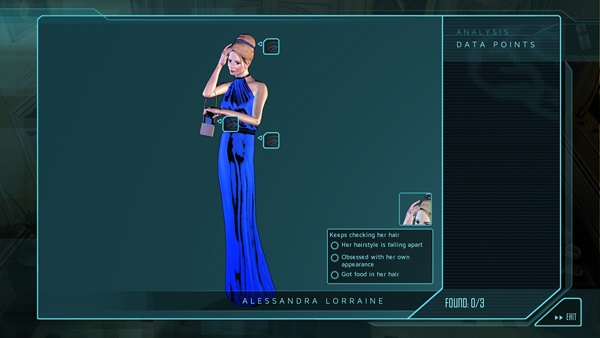 As for how female characters are handled in the game, I thought that it was pretty balanced. The would be female-lead is a likable character, but doesn’t get too much screen time, arriving only in the later half of the game. The rest of the women in the game are pleasantly varied with an assortment of flaws. Topics like teen pregnancy and marital infidelity are discussed and used as plot points without being excessively demonized, which I thought was refreshing. Race in the game felt a little less-balanced, with all the important persons being from the whiter parts of America and Europe. Maybe it’s expected in a political thriller that most of the players under investigation will be either pretty ladies or older white dudes in suits, but that felt a bit on the bland side. There’s characters of other colors, but they just have small side roles.

Moebius: Empire Rising is pretty good through the general arc, except for the last chapter which drags on too long before ending on a “needs a sequel” cliffhanger. It makes it feel unresolved, more like the first episode of a miniseries rather than its own standalone thing. If you enjoyed Gabriel Knight or Cognition then check this one out. It’s on Steam and GoG or available direct from publisher. If you’re pretty sure you aren’t the target audience, I might wait for a bundle or sale. But it’s kind of a Catch-22: the game would have to do well initially for there to be more of them, and I would like to see more adventures with Malachi and David and see their story really resolve.

One Response to Moebius: Empire Rising

Alliance of Awesome: The Dying Auteur