FTL: Faster Than Light is a roguelike(-like) that puts you in command of  your own ship and crew on a desperate mission to save the Federation – as long as you can survive countless hostile ships, assorted space adventures, and the capricious randomness that seems to decide your fate at every turn.

I am not, as a rule, a huge fan of roguelikes.  I occasionally try the ones that get well reviewed – 100 Rogues and such – but consistently find that, at best, they do not hold my interest at all.  Usually I chalk this up to the structure of most roguelikes, the lone adventurer in a dungeon, offering me too little in terms of gameplay to keep plugging away at it indefinitely.  Probably the same reason I’ve never taken a shine to any Elder Scrolls games.

This is generally not a problem that FTL: Faster Than Light shares.  Created by Matthew Davis and Justin Ma, this Kickstarter success story (which received more than 2000% the initial ask) takes the general concept of the roguelike – random maps and enemies, RPG elements, and permadeath – and replaces the adventurer in the equation with a whole starship with a small crew.  Immediately, thematically, this works for me ever so slightly better than your average roguelike, and when, come to find, I get to manage power allocation, crew activities, and weapon targeting in battle, even with the most basic ship, I’m sold.  Compared to most other roguelikes I’ve played, the fundamental gameplay here is more complex and engaging. 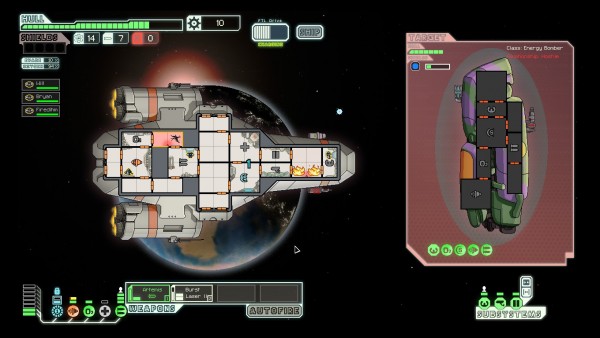 Even fairly early battles require you to make the most of your limited resources and weigh your combat strategy.

The plot of the game is simple enough, casting you as a Federation ship on the run from the Rebels who have overrun most of Federation space, with critical information about the Rebel fleet that could save what remains of the Federation – if you survive.  To reach the last bastion of Federation resistance, you must traverse seven sectors, each with numerous randomly-placed beacons.  At each beacon, you have some text-based encounter, some of which give you a choice to make, and many of which result in ship-to-ship combat with one of a variety of designs and species.  Though you’ll certainly see repeats of some of the more common events over the course of several plays, by and large it feels like there’s enough events to make the game feel different(ish) every time, at least for a while.  Beacon “terrain”, like nebulae, asteroid fields, and solar storms, can further mix-and-match your combat encounters a bit. 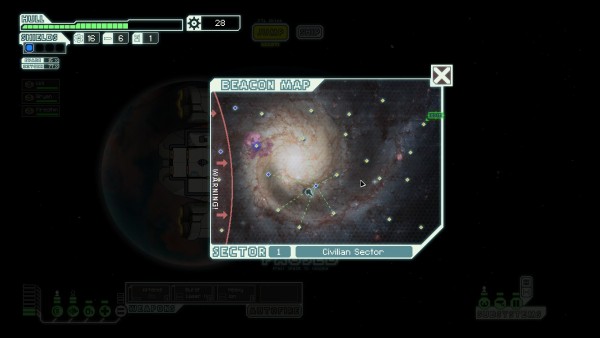 Operating your ship is a straightforward point-and-click affair, with a interface that, after the initial learning curve, I found quite usable.  You get the map of your ship’s interior, with each of your crew members wherever you put them, probably manning certain stations that benefit from having someone dedicated to its operation.  Crew can move around the ship as needed, though, to fix damage, repel boarders, or get clear of bombs the enemy’s teleported over.  Each crew member has his or her own hit points and increases in skill at whatever station(s) he mans, over time earning additional bonuses at those stations.  Disappointingly, your crew all start as blank slates, with zero skills in everything, but I suppose you could look at that as flexibility.  New crew can (and really need to be) recruited as you go, but they, too, start without any marketable skills to speak of.

Initially your ship only has the necessary systems – weapons, shields, and engines, of course, as well as life support (without which the oxygen drains out of your ship), sensors, door controls, and a med bay where you can heal your crew.  Other systems can be found or purchased during your adventure, giving you a variety of different options.  Each system needs some amount of power from your reactor, which only produces so much total; you can turn systems off entirely if you need the power elsewhere.  Systems can be upgraded for increased effectiveness, but require more power to run; your reactor, likewise, can be upgraded to produce more power.  During battle, balancing your crew’s activities and your power needs alike are critical to success. 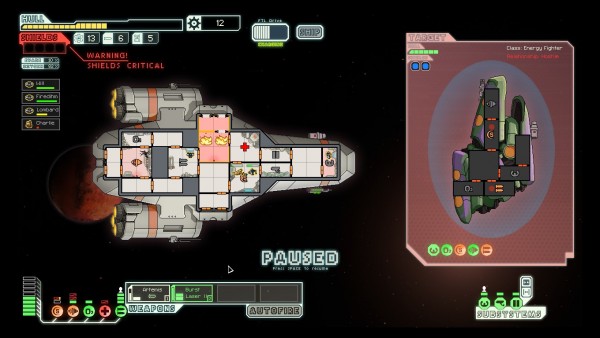 Although this setup is initially compelling, repeated runs will likely teach you to despise it as well.  Especially later in the game, you start to encounter enemies strong enough that you really must have certain systems to compete, but because of the level of randomness inherent in FTL, it is very possible that you simply won’t run across them (or will come across them too early to afford them).  It seems like there are a certain number of stores in each sector, with certain variations on inventory, but because the Rebel fleet will catch you if you linger too long, you don’t have the luxury of the amount of exploration that really seems pretty necessary.  Even then, there are certainly systems and equipment that are much more useful than other things you might find for the same (or greater) price.  If you haven’t gotten lucky along the way, you will eventually run in to ships whose shields you simply cannot penetrate no matter what you do, for instance.  Considering that this is a roguelike with a final boss, that can be hugely frustrating, to get to the end with an okay ship and realize that you are literally unable to beat the boss – not because of some flaw in your strategy, but because you didn’t run across (or, again, couldn’t afford at the time) just the right set of gear.  Indeed, you can find yourself in this situation at many points in the game, though the boss will always be at the end. 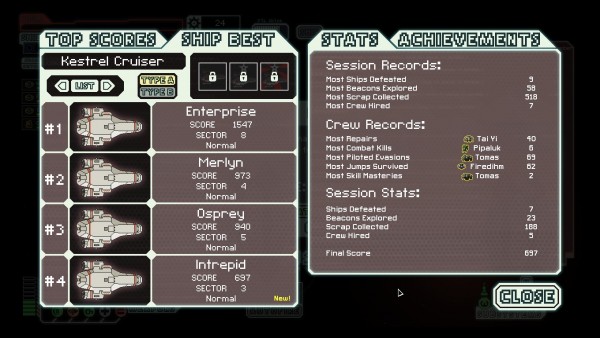 At least after you die in fiery permadeath, you get added to a nice scoreboard.

The randomness really sours some of the text events, too.  Often, you’ll have two or more options to choose from, usually with varying levels of risk and reward; but whether or not you succeed at the riskier options seems entirely random, or at least is black boxed so that you can’t be sure what improves your chances.  Options that have you sending crew to a planet or a space station can often result in very skilled crew members being killed by fiat, with little indication if there’s anything you can do to make that less likely to happen next time.  Even when you have crew or equipment that give you special options, those, too, seem frustratingly fickle.

FTL does suffer somewhat from lack of unlockables.  Only one ship design is available at the beginning of the game, and to unlock the other eight you have to follow the cryptic clues the game gives you and get a bit lucky in coming across the correct event.  Your crew and starting systems are defined by which ship type you begin with, so the ship is really the only choice you get at the beginning of the game.  One of the other ships is very easy to unlock – you get it the first time you reach the fifth sector – but the rest are much trickier.  In a few dozen plays I’ve only gotten a shot at one of them, and either I did something wrong or the dice weren’t in my favor.

This is a game that makes a good first impression and pulls no punches.  Fans of the brutal style of roguelikes will find that alive and well here, and I do keep going back to it sometimes despite my general apathy toward that genre because of the ship management gameplay.  But the implementation of the randomness makes me feel a lot less like Captain Kirk than a captain of one of those hapless ships that get blown up by some crazy random happenstance to establish the danger for the real heroes.  But it is addictive in that “play it until you get mad at it doing something cheap” sort of way.

Though that’s about the conclusion of my review for FTL: Faster Than Light, I do think that one of my personal favorite board game RPGs deserves an honorable mention here.  Probably the only reason I took note of FTL in the first place when it flitted across the Steam store last month was because it looked, on the surface, similar to Gorilla Games’s Battlestations, which puts players in a lightweight RPG in command of a ship made from a modular board representing – you guessed it – different rooms where different ship systems reside.  A lot of the same kind of stuff can happen, although it’s adjudicated by a game master rather than a computer.  The species and ship designs in FTL look…well, almost exactly like some of the species and ship designs from Battlestations.  Not that Battlestations was revolutionizing campy space adventure or anything, but still. 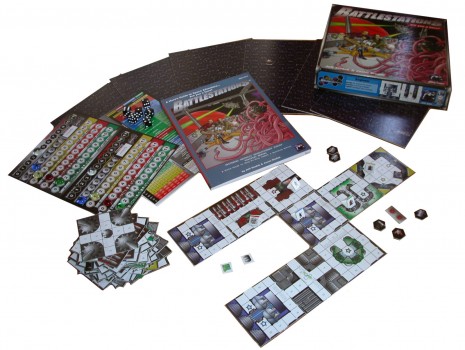 So I’ll admit that, when it comes to FTL, I’m a little like one of those incessant people who can’t listen to anyone talk about how good The Hunger Games is without aggressively mentioning Battle Royale.  Whether by chance or not, FTL does a ton of things very similar to Battlestations.  The difference is largely in the medium, and the fact that Battlestations is a game you play with friends around a table with dice and you can sort of do it your way.  It’s really one of my favorite board games, like, ever.  Fond memories.

So I guess what I’m saying is: if roguelikes are your bag, FTL isn’t a bad $10 spent.  Even if they aren’t, it might be worth a try.  But if you have a little extra cash, and some friends who can come over to your house every now and again for a campaign, go give it to Gorilla Games instead.  The experience is less frustrating and more rewarding.

2 Responses to FTL: Faster Than Light