I have no news, previews, or other soundbytes for Tap today, since I’m not at That Noisy Convention.  I am returning instead with a short contemplation about my weekend at Origins in Columbus. My first day at the convention turned out to be slightly unsavory (in retrospect). So here, I’ll concentrate only on the last day.

I will be honest in saying I haven’t found much time over the past month to play many video games. That’s because I’m active in developing games, and, as it turns out, that cuts out a big slice of precious playing time. But there was a time not so long ago when I had too much time for playing games. I joked recently with my coworkers that it was playing 200+ hours of Skyrim that made me realize, deep in my soul, that I really needed to be working full-time again.

I would have also thought that at that time that there was no more need for the internet to contain any more words about Skyrim, ever. But today I’m summing up my Origins experiences by just discussing one play session, and that play session involved Skyrim. Specifically, it involved a Skyrim tabletop RPG. And it was a damn good time.

The conceit of the game was that only one player would be the game’s main character, the Dragonborn . The rest would be likely Skyrim PCs or NPC companions without the aid of Dragon Shout powers. Since the Dragonborn was the standard sword-and-Nord type (with the additional power of a few of those signature Shouts) the more niche characters would still have a lot of colorful ways to contribute. I went in to the game wondering if there would be a character anything like the character I played in Skyrim. She was a kleptomaniac catgirl who was, frankly, a terrible Dragonborn, but an excellent rogue and assassin. However, the rogue/assassin role was taken up by a Dunmer character in this pregenerated party, while the Khajiit was an unarmed brawler.

The rogue/assassin character went into the hands of a young man to my left. He was wearing a Dark Brotherhood T-shirt, and it would’ve been cruel to deny him such an opportunity.

So I took what I had mentally reserved as a second possibility. I played as Lydia. 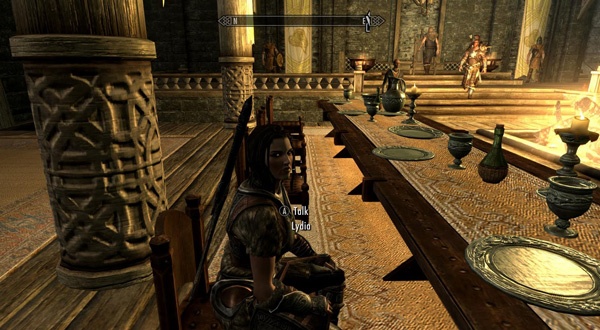 Ah: Lydia. She is the first housecarl a player typically earns, often, the first companion, and because she is quite useful in the early game, she has become beloved by the internet to the point of strange obsession. She has been given noble burials, starred in viral videos, and subjected to many, many creepy modifications. Her sometimes-bizzare behaviors are, in fact, endemic of Skyrim’s wonky companion AI as a whole. But because she’s the most well-known of the companions, these strange behaviors (combined with the occasionally sarcastic line of dialog) have given her a personal legacy of sorts. It’s not just “the companion AI script.” It’s Lydia’s AI script.

I will say that I found live, out loud roleplaying of the Lydia character to be a freeing experience. First of all, I know exactly how this character acts, at all times, and didn’t have to stop to think hard to consider my next action or cheesy line. But more importantly, Lydia has no idea how fear works. She is not programmed to feel fear. Therefore, the usual roleplaying planning-out sessions that often result in slow-paced hem and haw (we’ll send the rogue ahead, to look for traps) could be resolved by faster means. Lydia will look for the traps. With her face.

My first Dungeons & Dragons character, ever, was a Magic-User, but I would say I more often play the Fighter or Ranger typologies these days. Heroism in a fantasy realm traditionally calls for simple actions born of courage and purity of spirit. It calls less for flipping through books to prepare one’s daily spells, then forcing the party to take an 8-hour rest to regain one shot of Color Spray. There is an argument that the Wizard is more the character for a player who wants to do a lot of planning, and the Fighter is for simple-minded players. But it so often seems the case that the Fighter, simple-minded or no, is the protagonist or leader of a story, while Wizards and Rogues are helpful sidekicks. There is a small disconnect there, when almost every character type in traditional D&D is more useful or powerful than the straight-physical types are. 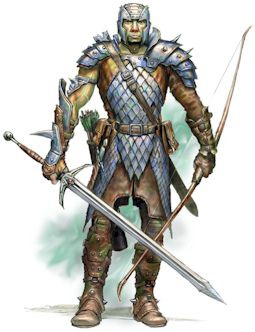 I have my D&D Next Playtest documents now, and though I haven’t had a chance to run the game, it seems to in fact be a return to the “simpler” Fighter, and the planning-heavy Wizard. There are a few small adjustments borrowed from Fourth Edition, so healing is simpler and resting often less required for magic-users. But the Wizard is looking here like a powerhouse. The Fighter is looking like the character for beginners, to be discarded once players master the game.

Skyrim at Origins did not use any version of Dungeons & Dragons as its basis. Instead, it was a reskin of the Hero system. If you aren’t familiar with different RPG systems and settings, Hero System is the system used for the Champions RPG, which later became an MMO. In other words, it’s designed for superhero systems, above fantasy. But during the session, I found, with the GM’s homebrew adjustments for Skyrim skill trees, it worked remarkably well for video game fantasy. Rolling big, honking handsful of D6s for damage is incredibly gratifying in the act of dragonslaying. And being able to simply shrug off several dice worth of damage (especially cold, because, hey, I’m a Nord) was a deeply satisfying fighter act.

There is something there that the Fighter in D&D never quite had. Superheroic, maybe. Sure. But even if I missed with my axe half the time, throwing my shield in front of other party members to roll a full, active defense on their behalf was equally, if not more, satisfying than another round of full attack.

So I’ll finish this winding road with my early D&D Next impressions from the con. It doesn’t take a very close read of the new D&D materials to come to the conclusion that an all-Wizard or all-Cleric party might fare very well in these oldschool dungeons. I am less certain about the fate of the theoretical all-Fighter party. So, like much of the internet before me, I’m pouring my heart out now for Lydia. I don’t think Dungeons & Dragons can hold you right now, you crazy, brilliant woman.

5 Responses to I Am Your Sword And Your Shield