I’ve been really busy lately, so I’m going to step up to the plate and bunt.

Annnnnnnd….. time. 50 words. I saved you reading not just this review but every other review of South Park: The Stick of Truth.

Well, they’re telling me to get back out there.

Last week my husband took me to see Welcome to Night Vale’s live show. This was a live theater performance where people stood on up on a stage with mikes and acted out a black comedy fairy tale. The show, which is still touring now, stars Cecil Baldwin and is based on the podcast by the same name. I’d never actually heard the Welcome to Night Vale podcast before seeing the live show, so, while I was entertained by the live show in its way, I knew I was missing out on a lot. There were lots of in-jokes the crowd laughed at which I had no context for. There were cameos that made the crowd cheer while I sat in utter confusion. A lot of it just went over my head because of my lack of any familiarity with Night Vale. 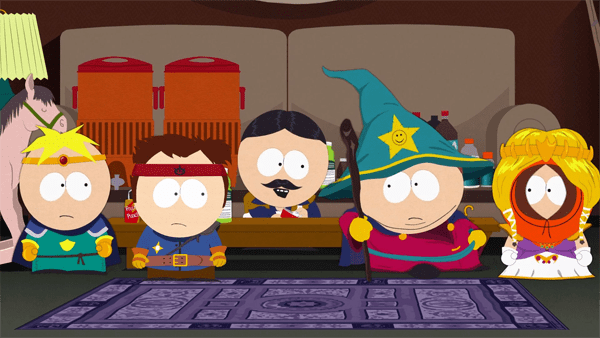 On the other hand, I watch the shit out of South Park.

In South Park: The Stick of Truth, there’s tons of random junk items that you can stumble on and collect. They don’t serve too much purpose except as quick gags inserted into the game in the menu. Just about every one of these items is based on something in an episode of the show. Many quests are logical continuations of episodes of the show. Most every person you meet is a character on the show. Exact animation sequences are taken from the show.

I don’t know how much or how little of South Park you would have to watch before you hit the right threshold of this all being super-funny without feeling like an overwhelming fanservice torrent. I think if you’ve seen slightly less of the show than I have, you’d probably be okay. If you haven’t seen it since the movie came out you might be shaking your head. I’m not sure. I get literally every joke in this game, and that makes me feel like a terrible person.

Much has been said about South Park creators Trey Parker and Matt Stone and their direct involvement with the entire development process of The Stick of Truth. That’s great, but heck with it: I trust the team that made Alpha Protocol to deliver a hilarious comedy game. And they did, but, hot damn, is it crude. An erudite person with a master’s degree, such as myself, is supposed to use the word “scatological.” But I’m comfortable with myself, so I’ll give it to you straight. There sure are a lot of poop and pee-pee jokes on South Park. So it is with the game. There’s not a single bodily function this game doesn’t joke about, and just when you think that it isn’t going to escalate that any further, it does. If you know you’re going to be put off by the standard South Park juvenile stuff, you already know not to play this. The ESRB description contains spoilers, but is a good synopsis of what kind of content you can expect if you are curious. 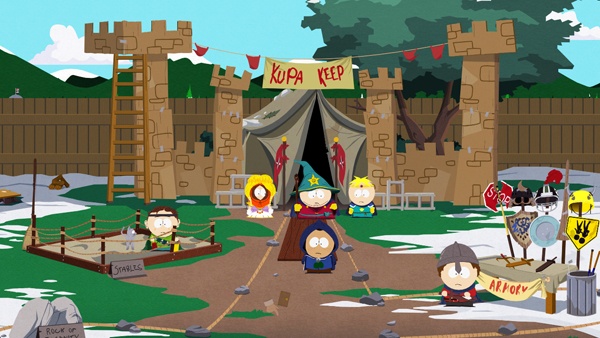 The game mechanics are JRPG style by way of Paper Mario. The game stars the new kid in the neighborhood, referred to as either “New Kid” or “Douchebag” by the other children. Combat is turn-based, with timed button presses required to block shots, use special attacks, or get critical hits. There’s a little of the Fallout pedigree in the way that the character earns Perks that modify combat, but stats other than those from equipment don’t really factor in. There’s four classic fantasy classes (you know: Fighter, Mage, Thief, and Jew (that’s Priest)), but these mostly affect starting equipment and special ability set. Otherwise the character can use any equipment he picks up. There’s a lot of equipment in the game so the character ends up being customizable to a pretty high extent, visually and statistically. He can take one companion at a time with him on his quest: all familiar South Park kids with special abilities and RPG classes of their own.

This is an Obsidian game, so it’s de rigueur to discuss how buggy it is. Well, so be it: The Stick of Truth is a little bit buggy. The primary issue I ran into was lag on the console (I’m on my Xbox 360, which sometimes just can’t handle the high fidelity of these papercraft graphics). Button presses require precise timing, but the input lag wasn’t predictable, so I’d just gotten used to the idea that my first weapon strike in any fight was going to miss. I also had some issues with sound in cut-scenes. In one scene in particular, near the end, the sound cut out for me altogether. I’m sure what Cartman was saying was both hilarious and vital to the success of my quest, but I guess I’ll never know. These problems are likely not universal and may vary a lot for you depending on format and install.

Like most modern comedy games, South Park has contextual dialog drops between characters to provide some random chatter. Sometimes these are great, and generally speaking the barks didn’t get old to me. The only times I got really frustrated with repeated dialog segments were during the powers tutorial sequences. 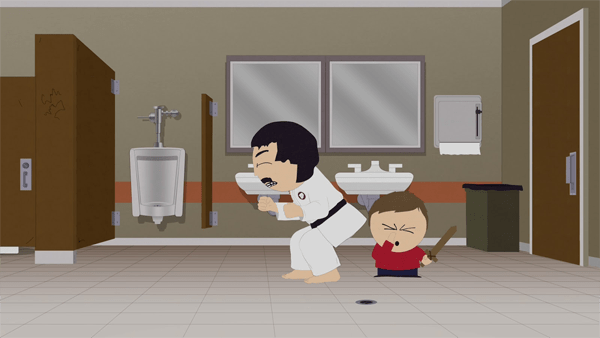 That brings me to the game’s fart-based magic system, which I now must discuss at length. The New Kid has a variety of fart spells he can cast. These have uses both in combat, and during exploration. The first fart is called “Dragon Shout,” and this information is delivered with all the solemn reverence that obviously requires. Each time the New Kid gets a new fart spell, there is a tutorial, and… well, these sequences aren’t too well-done, for a variety of reasons. First of all, they ask the player to perform a fiddly input sequence that’s a bit unclear. Then there is only one dialog drop recorded for failure, meaning failing multiple times gets annoying and frustrating. Then after finally passing the tutorial, the controller sequence learned during the tutorial isn’t the same as the one needed to actually execute the power in game. Shooting a fart spell during combat requires choosing it from a radial menu, then putting in a sequence, while using it on the map is a controller input somewhat different from the controller input used in tutorials. The farts weren’t terribly useful in combat anyway since better stuff was available without the associated mana cost, so I didn’t really rely on them. Fart-boosting items just sort of sat around in my menu. Basically what I’m saying is the farts were kind of messy.

I am certain I now hold the Tap-Repeatedly record for most uses of the word “fart” in a single paragraph. But why else write this review, right?

The Stick of Truth is direct in its parody. It doesn’t compromise (unless you have one of the regionally censored versions, I suppose, where it compromises a little), and there are a few times where it is actually charming and has a little heart. It doesn’t have much of a message, though, which is a little surprising. Maybe there just wasn’t much South Park could say about video games in particular, other than poking fun of a few common video game clichés. This is always funny when it happens, but other comedy games do it just as well. I play a lot of D&D, of course, so the way the game lampoons fantasy RPGs was particularly cute to me. The game’s overall premise of every child in a single neighborhood playing a high-stakes, hyper-destructive LARP was really adorable when it wasn’t disgusting.

The Stick of Truth feels like the TV show even when I’m in direct control of it, and that’s really a feat. But it’s every episode of the show, all at once. If you think you like South Park a little, but aren’t sure you can tolerate pure, unfiltered South Park blasted at you through a fire hose, you are not the right audience for the Stick of Truth. I was tremendously entertained and not disappointed, but my propensity for juvenile humor has already been well established. Not one for kids, to be sure. Then again, it can’t be said that South Park is really for adults. In fact due to its content it should not be played by anyone

But seriously you guys, thumbs up, if you’re a fan.

4 Responses to South Park: The Stick of Truth