I love a good time travel story; even if it messes with the space/time continuum and people start to disappear from photographs because their parents didn’t meet at the appointed time and go to the prom together.

Konami’s newest game for the Nintendo DS, Time Hollow, follows the “alter the past to save the future” theme. On the eve of Ethan Kairos’ 17th birthday, he has a bizarre dream in which his parents vanish through a pulsating blue hole. When he wakes up the following day, he discovers that he’s been living with his uncle for the past 12 years because his parents disappeared when he was five.

I’ve only spent an hour with the game – basically playing the prologue – and so far, I like what I see. The majority of that hour was spent getting used to the controls – all stylus driven, if you so desire – meeting some of the other characters in Ethan’s life and navigating my way around the map. I’ve only opened one time portal, so far, but it’s still very early in the game. At the moment, the game holds you by the hand and guides you to what you need to do, but I hope that’s just a tutorial and soon it’ll let me spread my wings and take the time (see what I did there?) to figure things out on my own. 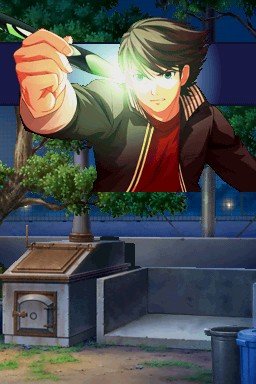 Look what I got for my birthday!

Graphics are crisp and anime-inspired. There’s quite a bit of decent voice work and ambient sounds, as you move from place to place, are quite good. I’d say something about the soundtrack, but in the short time that I monkeyed with the game, I didn’t actually notice it; however, considering Konami is offering the soundtrack for sale, I’m going to go out on a limb and say that it’s probably pretty good.

If you’ve played Trace Memory (aka Another Code) or Hotel Dusk you’ll know exactly what to expect gameplay-wise. If you’ve been living under a rock and don’t have a clue what that means: Time Hollow is text heavy; which isn’t surprising given the format of adventure games on the DS. If you’re more the “me bash things” type, then this probably won’t be the game for you.

If you have enough time bottled (I kill me!) to give the game a spin, there’s a web-based demo on the game’s Japanese web-site. Of course, that requires translating the text from Japanese to English, but that could become its own game.

Time Hollow was released 9/23/2008 and can be found at all the usual outlets.

3 Responses to If I Could Turn Back Time