Much has been said about Double Fine’s Broken Age.  Maybe because it’s Tim Schafer’s first point-and-click adventure game since 1998’s Grim Fandango.  Maybe because it’s a huge Kickstarter success story, earning well over $3 million by the end – one million of that in the first day – after only asking for $400,000.  Maybe because of the near-catastrophic announcement last year that development on Broken Age was behind schedule and over budget, enough that hitting their original release goal would require cutting 75% of the game.

It was for that latter reason that I suppose I was apprehensive when Broken Age (which I did not back) hit Steam at the tail end of January.  At the time, the thought was that it would be released on Steam Early Access, a concept many of us here at Tap are dubious about.  As it turns out, however, Broken Age is taking a more pseudo-episodic approach.  This release is Act I, with Act II coming at some date to be announced.  They aren’t the only game doing this; off the top of my head I know Revolution’s Broken Sword V (which I did back) is doing this; the first part has been out for a while.  I suppose maybe there’s something portentous about putting the word “broken” in the title of your game.

But in games, fun heals all wounds, and if Broken Age delivers what players want of it, no one will much care that it was delayed, eventually.  The question is whether or not it delivers – or, perhaps more aptly, has a chance to deliver, since it technically isn’t completely released yet.  Act II could always make or break the game as a whole, and it’s still unclear when we’ll see that.

Long story short, I think it probably will please those longing for the good old days. 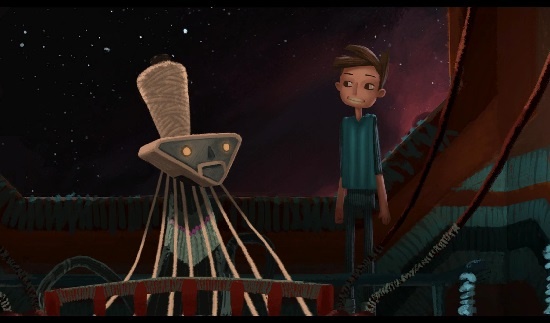 I am not a Tim Schafer superfan.  I like some of his work.  I have very fond memories have Grim Fandango, though in recent years some people have given me reason to doubt I’d feel the same way about the game now.  I liked the quirkiness of Psychonauts but could never get behind certain parts of the design and gave up halfway through.  I love the Monkey Island games and Full Throttle is amongst my favorite of the LucasArts adventures, but I’ve missed most of Double Fine’s output over the last decade, including Brutal Legend, Stacking, and Costume Quest.  I did play The Cave last year and thought that was pretty cool.

What makes me take notice more often is the promise of someone who was involved in the Golden Age of Adventure Gaming getting back into it.  Adventure gaming has never completely gone away, especially since the advent of digital distribution, but they can’t all be Tim Schafers and Ron Gilberts and Ragnar Tornquists.  Custodianship of the genre has passed to small, often European operations.  There have been good adventure games, but nothing that quite recaptures the flavor of the 1990s adventures, even in Telltale’s follow-ups to LucasArts stuff in the Sam & Max and Tales from Monkey Island series.

But maybe that’s nostalgia talking.  If I’m honest, Broken Age didn’t make me nostalgic, either, but you can smell Schafer all over it.  The abject quirkiness of everything is what most characterizes Broken Age, to me, and Schafer’s work as a whole.  There are a slew of punny space cereals.  There are cloud-inhabiting cults who remove letters from their given names to be “lighter.”  There are ice cream avalanches and hug attacks.  There are copious “stool” jokes, because The Stick of Truth is not the only thing that can traffic in humor scatological, although Broken Age‘s are actually funny.  Broken Age‘s stool jokes also include a vomiting tree, after all. 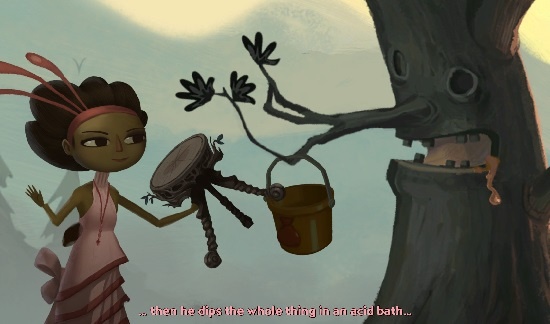 The game looks beautiful.  This we knew from the trailers, or suspected, but it looks great in motion, storybook-like, with character designs that remind somewhat of Psychonauts in their proportions.  It works better in the more fairy tale world in which Vella, the female protagonist, lives than the starship where Shay’s adventure takes place, but even there it works out pretty well for the style.  To a point, this isn’t a game for setting logic – but then, when are they ever?  Indeed, for a while it is difficult to see how the two stories overlap – you can switch between them at will, so there are no specifically timed cuts to use as clues – though by the end of Act I at least some of that mystery is solved.  Mostly, it’s just deepened.

The writing is the real star here, though, because it is consistently funny and excellent.  This is one of those games that makes you want to follow every dialogue path you can just because you want to hear what the characters say.  Vella and Shay are both written endearingly, and while they might not have the staying power of, say, Manny Calavera, they are pleasant to follow and root for.  If you funded Broken Age, or cared much about it, then you are probably the type for whom the writing would justify the game.  The story itself is good, too, if not overly incredible to describe: both Vella and Shay strive to escape the world they were born into.  Vella wants to stop the vicious cycle of her people offering up their young women as a sacrifice to a monster called Mog Chothra; Shay wants to escape the starship on which he has been raised, alone but for the computer who mothers him and treats him like a child.  It’s not the premise, but the charm with which they are executed, that sells Broken Age.

Where things do suffer a bit from too much old school is that the game feels old school in its design.  The adventure genre hasn’t exactly evolved a great deal since Grim Fandango, but for realizing that 3D movement is probably a bad idea, but even modern niceties like hint systems are absent from Broken Age.  That’s fine, mostly, since the puzzles aren’t too hard, and are often delivered in fairly discrete chunks; wander around for a few minutes and you’ll find several clear objectives, though it’s not always clear why they are objectives because of the quirky internal logic – and, indeed, sometimes the puzzle solutions are not terribly obvious, given the fact that you have to think like a madman.  But mostly the game avoids such things. 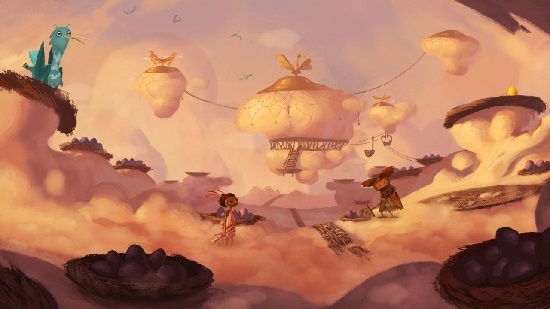 Maybe I’ve grown more weary of the genre now than I was when I last played Grim Fandango or Full Throttle, but Broken Age left me consistently bemoaning the puzzles – with a few exceptions because they were funny – since they got in the way of the next snappy bit of dialogue or something.  Even though the portions of the game where I was solving puzzles more than getting dialogue felt a bit like a slog, here and there, I still found my playtime at only a few hours.  Steam says four; I feel like Steam is low-balling it, but not by much.  Short, but again, this is just half a game.

Reportedly, the sales of Act I will keep the rest of Broken Age afloat, so assuming Schafer and Double Fine have their act together we’ll see the rest of the game eventually.  Although the world lacks the dark magic of Grim Fandango‘s Land of the Dead, perhaps, the writing will likely please most anyone who backed the game.  This is what they paid for, isn’t it?  An old school Tim Schafer creation?  And so far, that’s what it looks like we’ve got.

D’x has relocated to follow in the footsteps of Harm’ny Lightbeard, but you can still reach him at dix@tap-repeatedly.com.