If I could remember how many hours I sunk into Master of Orion II, I might be able to guess at how many Endless Space is destined to take.  But I just can’t count that high.

If I wasn’t piloting a starfighter against (or for) the Galactic Empire, or against the Shivan invasion, or for fun and profit, I was most likely at the controls of an interstellar civilization, whether the same Galactic Empire (because in Star Wars: Rebellion you could build Death Stars), or some civilization of my own forging.  This was the heyday of the 4X strategy – Explore, Expand, Exploit, Exterminate – exemplified by games like Civilization but best, I think, when moved into the sweeping sci-fi settings of many, many titles since.

Three such titles sapped huge amounts of my young life: two of them mediocre but licensed, and one of them as far from mediocre as you can get.  Master of Orion II is, maybe, one of the best PC games ever.  Hands down.  Full stop.  Even now it is superior to many of its successors, I think, save for its graphics; and that goes double for Master of Orion III, which was bad.

This genre has never quite died in the way that a lot of genres which were popular in the mid to late 90s did.  It’s stagnated, off and on, but usually it’s had, at the least, Civilization to keep the dream alive.  Space 4X games pop up a bit more often than do Civilization imitators, and every few years we tend to get one that, if it doesn’t do anything shockingly new, it at least does what it needs to do well.  Galactic Civilizations was probably the last space 4X to really really make a splash, and even its sequel was years ago.

But you’re hear to read about Endless Space, aren’t you? 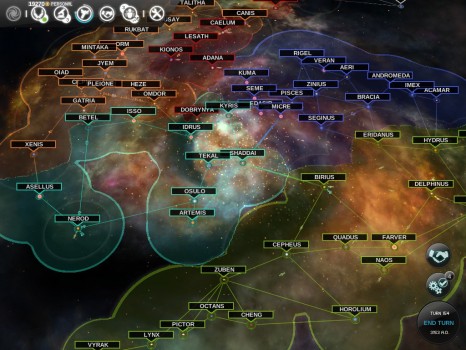 I’m, um…you know, the red one. But I’m totally friends with the pea green one!

Endless Space is result of the labors of Amplitude Studios, an independent developer comprised of industry vets, and perhaps as a result you could easily mistake Endless Space for a non-indie release.  It just looks excellent.  Not in a “how many polygons are on that model?” way, but in a much harder to achieve, graphic-designish way.  And thus Endless Space immediately and deftly hurdles the biggest problem with 4X games: user interface.  It’s nice to look at and easy to use, even given the amount of information you sometimes need to juggle.

Most of the game’s components are, admittedly, classic bits from innumerable games before it, though as ever they’re put together in a slightly different way here than other entries in the genre.  I’m starting to think that game development is less about innovation and more about combination – like cooking – and if so, Endless Space is a gourmet dish.  Nothing feels overdone, but nothing feels like an afterthought.

This is still a genre that can easily be very daunting for its complexity, and I suppose Endless Space is not an exception, though I’ve certainly encountered steeper learning curves out there.  It took me a bit longer to really get the hang of Galactic Civilizations, and some of the peculiarities of the system.  Endless Space feels very familiar.

You start by picking the race you will be.  There are seven or eight to choose from, and each is given an alignment – Good, Neutral, or Evil – which determines who they’re more likely to have workable diplomatic relations with.  Interestingly, mainline humans, who have built a vast Empire, are one of the Evil factions; there is a splinter group of Good humans, the Pilgrims, who are also kind of religious fanatics, and even one civilization that, according to the description, is basically one narcissist’s legion of automatons and clones.  Then the aliens, of course.  Like with many games before it, you can also choose to create a species by choosing your own set of edges and flaws, rather than taking one of the premade ones.

Your fledgling civilization begins with one colonized planet and a handful of ships, but you can quickly expand.  Endless Space uses the movement system that presumes there are pathways between stars, so your ships can only travel along those pathways (at least until you research better drive technologies).  Each system has from one to six planets of assorted types, and early on you can only colonize those planets hospitable to your species.  Some planets also have anomalies, which can be good or bad for you.  Other technologies will allow you to change planet types, colonize other kinds of planets, and assuage negative anomalies.  You’ll also find luxury and strategic resources on some planets, though they might require better technology to make use of (or even see), like those in Civilization V. 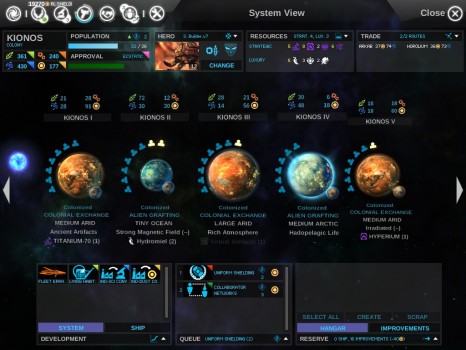 Helpfully, most improvements you can build in your territory are system-wide, with only a few planet-specific things to juggle – and the AI can do it all for you if you don’t want to.

So Endless Space is off to a pretty good start with how building your infrastructure is handled, and I’ve always been a bit addicted to just really making the planets in my empire sweet.  As a consequence, I often find myself lacking in military, and sometimes building that up can be a bit of a chore.  But Endless Space strikes a superb balance for me on this point. 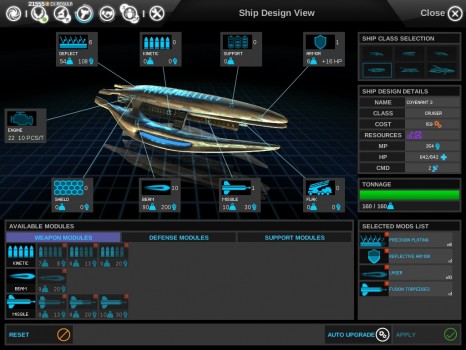 This isn’t as complicated as it looks.

It’s pretty rare to see a 4X space strategy that doesn’t let you muck about with ship loadouts, and Endless Space is, in principle, no different.  But you really only need to be concerned with your weapons and defenses; you won’t be regularly refitting your ships because of every little advance in engine tech or whatever.  Some players may be disappointed with the fact that the main thing you’re doing is modifying combat performance – all of your ships basically move equally quickly and so on – but I find this just right.  Like in Galactic Civilizations, you’ve got a few different weapon types and a specific counter to each, then a certain amount of tonnage on the ship.  You fill it, you’re done.  The diagram is just for show, as you can’t change where on the ship stuff goes, nor does it matter.  There’s also a handy “Auto Upgrade” button that makes upgrading old designs with the newest comparable equipment a one-click affair, and retrofitting existing ships to the new design is similarly simple – though it can get costly.

Combat is a fine middle ground that pleasantly surprised me.  Older games give you turn-based or real-time control, like Masters of Orion II or another of my favorites, Imperium Galactica II, while more recently the trend seems to be to make battles pretty well automated, even if you can watch them.  I’ve slept through GalCiv battles and puzzled over how Sword of the Stars works, but Endless Space nails this: battle is played out in three main phases – Long Range, Medium Range, and Melee Range – and in each one you can choose a single card to play.  These cards fall into many categories, like Defense or Sabotage, and certain categories have an advantage over others, rock-paper-scissors like.  Each card also does something for your stats, and new technologies can unlock new, more powerful card options.  I’ve found that the card play can make a huge difference, and what cards you choose can make up for having a much weaker fleet on paper. 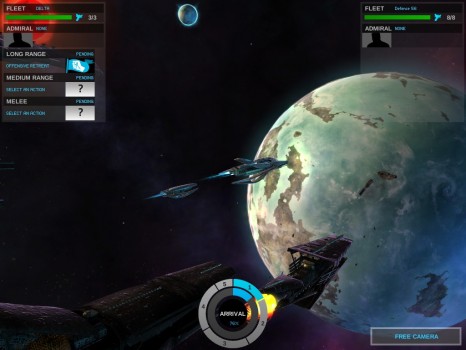 Here you see my ships (in the distance) playing the Retreat card.  Which…you know, makes your ships run away.

This plays out in a really nice 3D battle on the screen, with lasers and missiles flying and ships exploding as needed.  For those who like to micromanage this system will feel woefully hands-off, but I like how it makes battles another facet of the game, not something that feels like a separate game on its own, or what the game is really about.  The animation looks really good and the ship designs are attractive, though you’ll see much the same maneuvers no matter what cards you play (at least in my experience), so it’s probably good that they don’t last very long ever.

Both your colonies and fleets can be led by heroes, which have stat cards and level up, allowing them to earn ever-better bonuses at what they do.  They can’t, as near as I can tell, be sent on missions and things like in some games with heroes or agents, though some have abilities that refer to spying and so forth: I didn’t play a very military civilization and maybe that’s why I never encountered espionage, though I think it must exist.  Perhaps covertly. 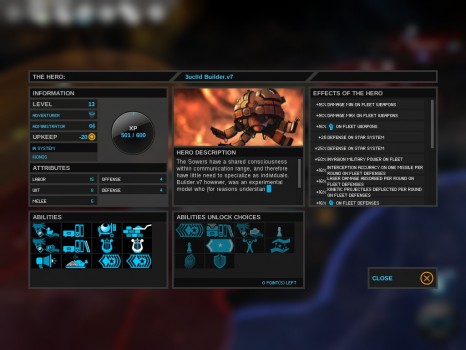 Heroes all seem to belong to playable races, even if the race isn’t in the present game.

I’ve got one full play of Endless Space under my belt and can’t wait to dive back in.  There’s multiplayer (which many games in this genre lack, at least at first) that I’d love to try once I’m slightly more skilled, and of course other races and ways to focus my efforts.  This universe is well-imagined if pretty standard for the genre; it doesn’t have quite the Douglas Adams-like sensibilities of GalCiv but occasionally cracks a joke.  It’s not an overly dark universe, though it certainly could become so with certain races.  The eponymous Endless are yet another forerunner species, a precursor to the current races which has left its scattered remnants about.  I wonder if there’s any way to really uncover lots about them, more than the artifacts you can find on some planets and moons that grant certain bonuses.

In a perfect world, I’d get to go hang out with Death if I won.