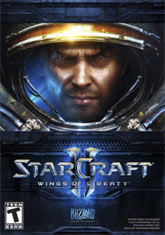 “In the end, I liked the game, but I doubt I will ever play it again or buy the expansions or mini-sequels or whatever the hell they’re doing with it. In a way, it makes me sad, like in the way one tunes into an old favorite show from childhood, only to find it’s an abomination. I returned to Starcraft and found some of those abominations, but their creative approach to mission design kept me playing all the way to the final insipid line of dialogue.”

First, this is not a multiplayer review. I concede the point that Starcraft 2 was designed with multiplayer in mind, but I’m focusing on the single player campaign for this article.

Second, and I’m fairly ashamed of this fact, I never finished the single-player campaign of the original game. I had to watch this video to catch up on the plot, making me either an objective reviewer of the sequel or an ignoramus of the franchise’s revered staples, depending on your perspective. I did finish about 80% of the game and then…I don’t remember, exactly. I just sort of stopped playing. Maybe I found Team Fortress. It was a long time ago.

As I never finished the original, I naturally hesitated about ten full hours before rushing out buy like a good American consumer. As Steerpike said in his review,  it felt irresponsible not to buy it. SC spawned an entire genre and made us suffer through countless shoddy imitations, much like one of Blizzard’s other properties whose name escapes me because I live under a bridge in Tibet. And, I mused, surely the fact we haven’t seen a Starcraft game since Seinfeld was still on the air might foster some amazing improvements to the mechanics and graphics.

And, believe it or not, Blizzard delivered. Though I can only play the humans in the 29-mission campaign (save for a handful as the Protoss), this is not the game you remember from 1998. I had to gather TWO types of resources–Vespene gas and minerals, and then build structures like bunkers, engineering bays, armories, starports, and factories, all of which could lift off and relocate. I had siege tanks with two modes of fire, cloak-capable fighters and bombers, and even nuclear missiles. I could upgrade units on the fly. It was amazing. It was…it was…

…Starcraft, circa 1998. As either a testament to the original’s brilliance or to Blizzard’s corpulent greed, it’s the same damn game. Which is good, provided you love the retro-RTS formula of the first game. Sure, there’s some minor in-between mission tweaks. Instead of the incessant “teleconferencing” of SC1, I was free to roam around my battlecruiser. And by “roam,” I mean click on one of four text boxes: Bridge, Armory, Cantina, and Laboratory.  I could also engage in expository conversations with any number of fascinating characters, providing I enjoy cultural stereotypes, shallow personalities, and dialogue wrested from my personal fourth-grade writing effort entitled Galactic Wars. It was my intent to post exact quotes from the game for perusal, but as I cannot bear to endure the cinematics for a second time, just take my word for it: they suck. 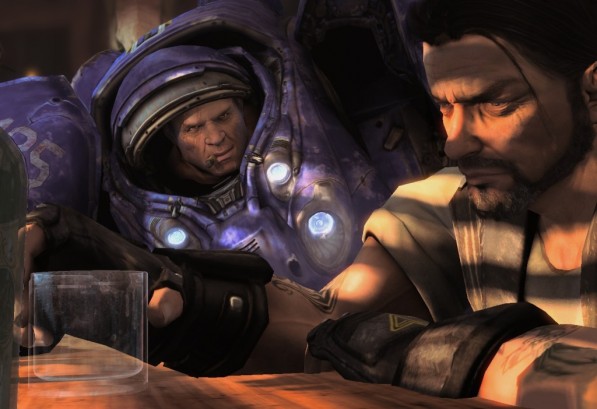 I promise you’ll hate them both long before the credits roll.

Just stay out of the cantina entirely, as most of the worst dialogue comes from exchanges between Tychus and the game’s hero, Jim Raynor, or from the news telecasts. I lost count of how many times I rolled my eyes, sighed, or just hopelessly stared at the screen while Raynor and Tychus unleashed another devil-may-care quip about their hopeless situation. Thank Christ they didn’t explore Raynor’s alcoholism or depression that might make me cry or interest me in the lackluster plot.

Story and dialogue aside, Blizzard did quite a few things right. Graphically, the cinematics are stunning. The Zerg look more vile than ever, the Queen of Blades still excites parts of me I’d rather not publicly acknowledge, and I enjoyed watching them. Just turn the volume down to be spared the awful acting, script, and to borrow Sakey’s term, Saturday-morning cartoon storyline. He’s not kidding, and neither am I.

As for the in-between mission menus,  they forced me to make some interesting decisions. The laboratory features a Protoss technology tree and a Zerg technology tree, both of which I could exploit by fulfilling secondary mission objectives. Once I accumulated enough points in the Zerg tech tree, for example, I could either upgrade my bunkers with a massive automated turret or with improved armor.  Another Zerg upgrade forced me to choose between giving my special units extra energy for cool abilities or granting all ships and vehicles auto-repair abilities. I agonized over those decisions for a while, and I appreciate games that make me agonize over strategic choices. (Go here for a detailed list of the available upgrades).

Successful missions filled my coffers, and I could spend this wealth at the armory. As I never had enough to buy the two upgrades available for nearly every unit and structure, I was again faced with difficult choices. Do I want tougher marines or marines with the capability to trade life for damage? Should my Ghosts have increased range and sight or permanent cloaking? Should I get increased range for my beleaguered bunkers or increase their troop capacity? Eventually, I was able to buy both for both, but when they first appear, most players will only have enough cash for one or the other. I enjoyed these choices for the reward they represented and I savored the decision-making process.

Of course, these are just fringe features when compared to the actual missions. The gameplay itself, if I haven’t already made myself clear, is nearly identical to 1998’s classic. It does feel dated, at first in a pleasantly nostalgic way, then in a wait-a-minute-they-haven’t-changed-a-single-thing way. Even so, Blizzard’s relentless dedication to refinement really pays off both for the missions and for the units, and I found only a few “throw away” units during the course of the campaign. On “hard” difficulty, I was pleasantly challenged on most missions, and frothing-at-the-mouth frustrated by only two; this was easily remedied by restarting said missions on “normal,” or “girl-child” difficulty.

But the most tangible improvement over the original, perhaps the only one, is the level design. I scarcely remember any missions from the first game, but I know I’ll look fondly on several of the missions from the sequel. In what may be the best mission, (minor spoilers ahead) I must obliterate a Terran base corrupted by the Zerg. These infestations combust in sunlight and thrive at night, and as this mission features a day/night cycle, it meant I would venture out to destroy infested structures during the day and scramble back to the base before the sun went down. As night fell, hundreds of Zerg-zombies swarmed my Firebats and bunkers. Worse, the secondary objectives required me to send my boys out at night to hunt twin horrible burrowing-infestor-type-things. I normally despise timed missions, but this one was some of the most fun I’ve ever had playing real-time strategy. 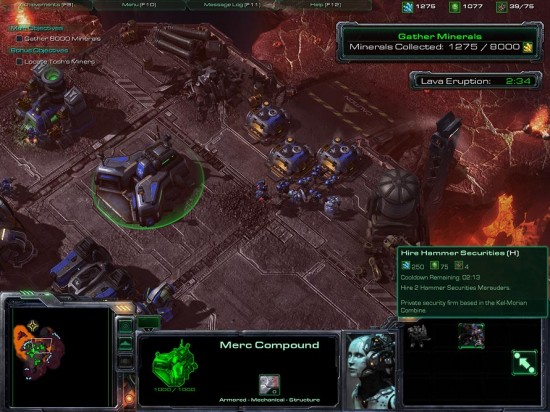 What does that dwindling number after “Lava Eruption” mean? Oh…

On the whole, many of SC2‘s missions play out as both fun and creative. One features tidal lava pools that ebb and flow during the course of the mission. In another, I used a Ghost (sneaky infiltration unit) and other stealth units to infiltrate and annihilate an enemy stronghold with her nuclear weapons. (Nukes always make a game better. Always). In one of the several Protoss missions, I had to use my massive army to hold out for as long as possible against an all-out Zerg assault, even though it was made clear in the opening mission cinematic that my army would inevitably perish. The mission created a curious emotional mixture of fear and pride; my Protoss were doomed from the start, but they would die bravely while making the Zerg pay the price in blood. (end of minor spoilers)

The final few missions tend toward the more straightforward Build a Massive Army to Crush Another Huge Army variety, and by then I was ready for the game to end. The core gameplay of SC2 does, in fact, get old after twenty-some missions, and I started missing more advanced real-time combat options such as World in Conflict’s brilliant use of tactical aids, cover, and formations.

I Can Never Go Home Again

I don’t regret buying Starcraft 2, though I suspect I will only flirt with the multiplayer before uninstalling the game and placing it on the Shelf of Oblivion. This is not an indictment of the game’s multiplayer play–I’m certain a large percentage of the millions sold went to people gleeful and eager to play a slightly prettier version of the 1998 original. To me at least, the conventions of real-time strategy such as base building, unit hoarding, and reflexive combat were  eclipsed years ago by real-time tactical games such as Myth, Homeworld, the Total War series, and World in Conflict.

Those looking for a single-player experience with pathos, depth, or anything resembling maturity would do better to…well, look anywhere, really. Some will call the admittedly well-balanced gameplay mechanics stagnant, while others will call them a return to brilliant elegance.

In the end, I liked the game, but I doubt I will ever play it again or buy the expansions or mini-sequels or whatever the hell they’re doing with it. In a way, it makes me sad, like in the way one tunes into an old favorite show from childhood, only to find it’s an abomination. I returned to Starcraft and found some of those abominations, but their creative approach to mission design kept me playing all the way to the final insipid line of dialogue.

I suppose I shouldn’t blame Blizzard for trying to appease millions of customers and to make millions of dollars, but some naive and foolish part of me was hoping to return to Blizzard’s version of real-time strategy to find something I missed.

Instead, I found exactly what I expected.