Traverse City, Michigan is known as the cherry capital of the world. Michigan’s cherry production is about 250 million pounds, and represents about 75% of the tart cherries and 20% of the sweet cherries grown annually in the United States. That is a lot of goddamn cherries and I live right in the middle of it. Traverse City, as a rule, puts cherries in EVERYTHING, from butter to hamburger.

Cherry Capital Con (see above rule) or C3 is primarily a comic book expo with a multi-faceted offering of cultural media history. The offerings range from mainstream comics to work from smaller artists to a large contingent of Stars Wars memorabilia.

I rouse my 14 year old son, Bear, from his slumber and tell him its C3 all day, let’s roll. Heading out, we decide to eat a quick pre-noon lunch.  We ponder food choices and unanimously agree that a 5 star dad/son day equals comics, chicken wings and boobs.  Hooters it is son, you have chosen wisely.  We are served by the baboon-ugliest Hooters girl ever; at least that’s what we have learned to tell Moms.

Wow there is a lot of stuff here, 60 booths with 7 hours available, which will be tight, especially with all the damn Stars Wars stuff messing up our ADHD.  We move through the room checking out prices on issues we are collecting and run across some promising future returns.  When collecting new comics it still remains true to get any Number 1 issue first prints and any variant covers available.

We decide to stop by the guest of honor booth, Tony Moore.  Tony is pseudo-famous for his cover art on the launch of Robert Kirkman’s ongoing graphic novel series The Walking Dead, which earned him an Eisner award for best cover artist in 2005.  Tony is billed heavily in the promos with references to The Walking Dead, but is NOT involved in any way shape or form with anything Walking Dead other than that first cover he did.  I know this because that’s what he told me directly, with the look of a guy who has had to endure thousands of Walking Dead questions that he cannot possibly answer.  We could talk Ghost Rider, which he has worked on, so I hit him with my favorite Ghost Rider moment: the time Ghost gets his ass handed to him by big green in the World War Hulk run.  Tony is really cool, incessantly drawing while we chat (some really cool stuff with the Hulk, bonus!) Eventually, though, clock ticking, we move on.

JEM collectables has a booth with an absolute sand crawler amount of stuff.  I haven’t seen as complete a set of Star Wars stuff as this in a long time.  They even have the infamous R2D2 Pepsi ice container display. I need SW stuff like I need an ex-wife and my son has to Force choke me away from this booth.  The Dark side calls me back the entire day.

Next stop is Dan Way, the supercool writer of Deadpool.  Dan is a native of West Branch, Michigan – known for its outlet malls and little else except, I guess, Dan Way – and frequently references various Michigan stuff such as cities in his work.  He says the references are Easter eggs for his Michigan peeps, super hell yeah to Dan. I talk to him about everything and he likes signing stuff, so he signs stuff. We talk Deadpool, and the recent story arc of DP losing his super healing factor, and how it actually is funnier than either of us expected.  I begged for more involvement of Deadpool’s only friend, Bob, Agent of Hydra, who is just an average joe working for the Hydra terrorist organization because they have good benefits. And he says Bob actually has quite a fan club. A line forms behind us for, no doubt, for the next round of similar fanboy questions.  He never hustles us along or rushes us and because of this, I will undoubtedly make sure I buy anything he is ever involved with.  We get ready to move along when we hear a PA announcement asking for the presence of the idiot who has left his car running out front for the last hour and it has a Deadpool sticker on the back. Then, in a very ultra dork like manner, Dan Way stands up and walks to the front door and the place erupts in cheers and jabs. 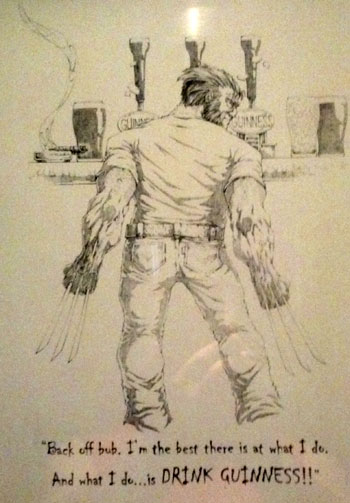 We can only fall from the Nimbus cloud we are zipping along on and are cautious to dodge anything that might snuff this most excellent adventure.  We slide over to Ryan Lee, a Michigan-based illustrator.  I look through his book of excellent prints and ponder a few, settling on a nice one of Wolverine promoting Guinness. The print’s $20; the original would set me back $100, but I’ve already hit my entire junk budget for the day.  We discuss creator-owned comics and the issues with the two 800 pound gorillas Marvel and D.C.  Nice guy. I wish I would have bought the original print.  Bear informs me I would have had to explain that to Mom; I remind him he hasn’t told Mom of his recently acquired collection of Deadpool figures; touché Dad, touché.

Time is blowing by and it’s time for the costume contest. This, surprisingly, has a lot of contestants and some really good creativity.  The stage is a basic 16 foot boat dock and first up is a guy who has made an Ironman suit from foam and LEDs – it’s actually really good.  Bonus points for style.  A good representation of Deadpool is next. This guy brings Nerf guns and deftly shoots the judges and announcer repeatedly.  Next up are a couple of girls in weak anime and then an odd Pac-Man tribute with four people and cardboard cutouts. Some doofus in a Harry Potter coat made from his mom’s drapes is up but he nails it with an expert recreation of catching a snitch, the crowd is pumped. Then it happened, the show stopper: a girl has made a Minecraft creeper from cardboard boxes. She quietly walks the dock and then stomps her feet at the last few feet and the noise from the aluminum dock banging freaks the shit out of everybody. Seriously it sounded just like the game and looking at the rest of the players, she has just, hands down, won this thing.  So the results come down and Minecraft Girl dominates, with Deadpool and Harry Potter on the tail.  Ironman looks like he has been kicked right in his Tony Starks; I wonder how long he worked on that full suit of armor.

Circling the room to chat with a lot of artists, illustrators and storyboarders, we realize the entire day has gone and we need to bounce; food is paramount at this point.  We make a long pit stop at G’s pizzeria and discover we are under budget for the day.

Dammit, I should have pulled the trigger on that original print… but that will give us a reason to make C3 next year.  If you live in Michigan this is a must-go weekend addition. Saturday is the most complete day, and I guarantee there is plenty to enjoy for the day drive or overnight stay. Even without Con, even if you’ve got your baby momma in town, Traverse City has more than cherries and comics – it’s one of northern Michigan’s top vacation spots. Go for a trip, stay for the Con.

Judge elbuchosan for taking his son to Hooters at elbuchosan@tap-repeatedly.com.

One Response to Cherry Capital Con