Personally I wasn’t really sold on much of what Nintendo had to show about the Nintendo Wii U at E3. Granted, I wasn’t sold on the Wii at this point in its life cycle either, and I ended up quite liking it, mostly.

But as news continues to seep out to us about Nintendo’s next console, I’m starting to see some serious red flags about how Nintendo thinks this is going to work.

Well Why Didn’t We Think of That?

I chuckle a little bit when somebody talks about their audience being “everybody,” as Nintendo of America’s Scott Moffitt told GameSpot at E3.  Nintendo’s an innovator in the field, no doubt there, so maybe it shouldn’t be surprising that Nintendo realized, “Why don’t we just make video games everybody will like?”  I bet Sony and Microsoft will be really kicking themselves for not thinking of it first.

Seriously, though: in entertainment, “everybody” isn’t a real audience.  Certainly not for a several hundred dollar piece of gaming technology that requires several other expensive electronics to use.  “Everybody” is a pipe dream based on the assumption that people can be boiled down to certain traits and commonalities.  This audience isn’t real.

And yet: when asked who the Wii U’s core titles were for, Moffitt responds, “It’s a simple answer: the Wii U is designed to appeal to everybody.”

Speaking as someone with only entry-level glimpses at how making games works, even I have run into the audience question.  One of the most challenging bits of creating entertainment is determining who your audience is and how best to serve that audience.  If you don’t know that cold, and stick to it, you run serious risks of your game having trouble finding any audience.  This concern certainly does not go away just because you’re talking about an entire brand.

Nintendo said similar things about the Wii, in its time, but their actual marketing was always pretty clear: when they said “everybody”, they meant casual gamers, and those who weren’t casual gamers but might become so with a nudge.  The message was that Wii games were the kind of thing you could play without knowing tons of buttons on a controller, that you could play with your kids or your parents, that didn’t always involve fragging n00bs.  The fact that there is some overlap between “hardcore” gamers and “casual” gamers does not change who they were marketing the Wii to.

And it shows.  As much as they’d like to think otherwise, the Wii’s library isn’t that intriguing for the “hardcore” gamer.  Mostly it’s the occasional first-party title that’s really excellent (though some hardcore gamers shun the likes of Mario on principle, even though he still has great games), and then an oddball here and there like No More Heroes: third party, good use of the controls, and indelibly hardcore.  The Virtual Console helped matters because hardcore gamers get nostalgic, sometimes, but ultimately the Wii just never caught fire as a hardcore platform.

Nintendo found its niche with the Wii, and it worked for them.  But the Wii U?  This is crazy talk.

Attempting to cater to everyone invites the old pitfall of being nobody’s favorite.  Maybe that works in the game console business.  But I think Nintendo’s overlooking a very important factor in their “for everybody” equation, and that’s the screen on the controller.

The size of the controller aside (as a fan of the original Xbox’s “Duke”, I’m not bothered by big heavy controllers), the fact that it features a big screen, and that that’s the innovation here, and that it’s a touch screen, presents problems.  Tech-savvy kids who make up the sort of usual Nintendo audience probably won’t miss a beat.  I doubt many hardcore gamers will, either.  But there’s a lot of people who are afraid of too many screens.  Seriously.  Two screens, for many people, is one too many. 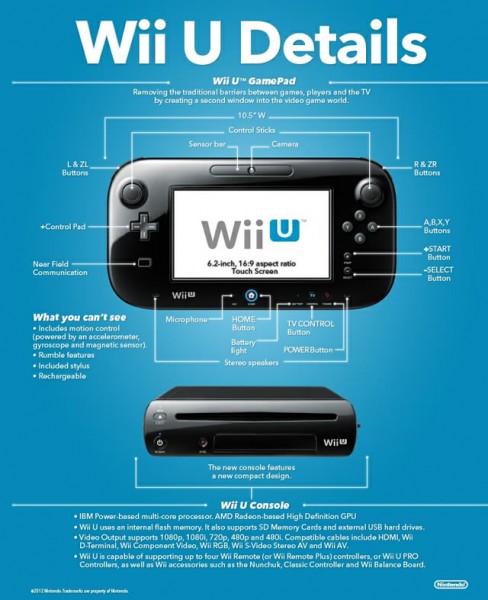 The new standard of universally accessible!

Not to mention that touch screens can be daunting to people not used to interacting with them.  And there’s also the whole discussion about the confusion produced by the fact that some of your buttons are physical, and others…well, not.  To some design sensibilities that would be a bad thing.  I can practically hear players now: “Wait, that’s a button?”

Sony and Microsoft dropped any pretenses of trying to cater to everyone long ago.  They aim to make their game systems good game systems for the gamers likely to buy them.  They’ve adapted their business model to expand their audience by expanding the way in which their hardware engages that audience: my PS3 is now an integral part of not only my gaming experience, but my TV and movie viewing experience.  But Nintendo seems to think that if they just wish hard enough, everybody will find some appeal in video games.

I wish it were true.  I do.  But there’s just a huge barrier to entry.  A lot of people simply have no interest in even trying.

Nintendo says that the Wii U will be for me.  Because of course it will – it’s for everybody!  But you don’t even know me, Nintendo.  You can’t be bothered to pay attention.