In our latest edition of My Idea of Fun, Tap-Repeatedly staffers discuss two delightfully under-dogged games, and explain why you (yes, you) should give them a go. Remember, there’s no shortage of unsung games out there – only a shortage of those willing to sing their praises. Today, xtal and Gregg B hop on the Fun Train to share their thoughts. What unloved games could have bubbled to the thick, gloopy surfaces of their minds? Read on to find out!

I’d be lying if I said my idea of fun was Clive Barker’s Jericho. It’s about seventy-five per cent of my idea of fun: the production value is decent enough, the story is better than you might expect, and there are certainly some well executed ideas throughout. The overall experience seems lacking because when you get down to it, that classic thing we call “gameplay” is a bit shoddy, and this is probably why it wasn’t very popular. Now, that can often be a deal-breaker in overall terms of quality, but not always (see Alpha Protocol). “Gameplay” is one of those lazy words people use, but sometimes lazy words just need to be used. Sure, it’s like describing baby food as “mushy,” but mushy baby food is important to babies, and games with good gameplay are important to gaming folk!

So: what’s wrong with it? Well, for a game from 2007 (year of Portal, Bioshock, and Assassin’s Creed) it plays more like a game from 2002. Graphically it looks about on par with Doom 3, and its controls can be as helpful to your experience as Metroid Prime’s (yeah, I said it). The combat never really impresses or awes, and probably half of the boss fights were unbalanced or awkward. Neither of those things are outright broken, but they don’t really serve the experience all too well. So to recap: loose controls, mediocre combat, inconsistent boss battles…

Then what’s fun about it? Well, Jericho has a quality B-movie/horror film aura about it (I mean that in a complimentary way). The writing is an effective blend camp and sobriety and the visual flavour is just the right level of gothic, despite the dated quality. You’re part of a unique, SWAT-ish team of individuals who investigate supernatural happenings. Imagine the plot of F.E.A.R. was less absurd, and instead of sending one guy in, they sent a whole team of weirdos with super powers. Kind of. After a brief introduction, tutorial, and some time travelling you’ll begin the bulk of the main story with kind of a second introduction where you’ll see real action as you lead your squad of seven into some weird shit. Soon enough the game opens up and gives you the crucial ability to switch your point of view to any of the members of Jericho squad. *This* is where it gets fun. 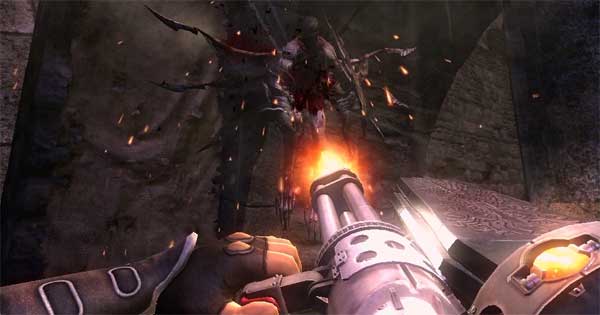 Every member has a somewhat unique weapon in addition to their own special abilities. From summoning some kind of hell-spawn, slowing down time, guiding bullets, to plain old astral projection, it’s a simple, classic idea, executed nicely. The characters are wildly varied, with none too plain or ridiculous; I found myself growing to care about some, and wondering what others were up to. That was another great twist of Jericho from a story point of view: most shooters and action games try to involve you by convincing you that “you are so and so” and “this is your story,” whereas here you are strictly an interloper. You can walk in the shoes of any character, but you never know what most of the characters are thinking, let alone their reasons for being part of the Jericho Squad. Just the right amount of story is revealed as you trudge through to the end. 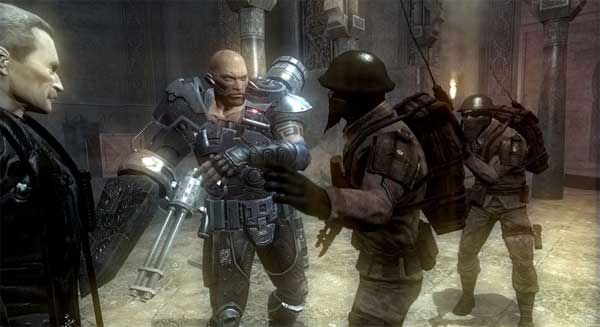 It’s worth noting that with just a bit of redesign this could have been marketed as a co-operative play experience. Many games that popularized the co-op campaign like Halo 3 and Gears of War have little customization in the way of differentiating play styles: you can have a different loadout of weapons and perhaps a different perk, but each player in those games has no fundamental difference. A game like Jericho would have had endless possibility as a co-operative experience, with anywhere up to a half dozen people. Of course when you play alone you have free reign to hop out and into any character you like, so there might have been challenges in designing a fair system without locking people into one avatar, but I truly think it could have worked. A missed opportunity, no doubt, but what you do get may be more than meets the eye. 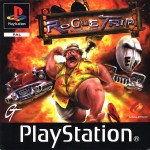 Screw Twisted Metal. Seriously. Screw Vigilante 8 as well. Actually… I’m only joking. Don’t screw either. They were both really quite excellent. But the future — a future — was Rogue Trip: Vacation 2012 (happy new year!) an often overlooked and typically zany vehicle combat game of ‘98. Rogue Trip was the sort of game you’d get if Twisted Metal 2: World Tour had hopped into a DeLorean, time traveled to the future, partied hard with Crazy Taxi, got very drunk, rather sick, and come back covered in crusty, pixelated, wobbly polygonal vomit. Like Twisted Metal, it wasn’t an especially pretty sight but under the hood was a game which was quite unlike its peers. Not that there were ever that many any way. Who cares? It’s my idea of fun.

Singletrac, the developers of the first two Twisted Metal games, were bought out by GT Interactive in 1997. Unfortunately for Singletrac, Sony retained the rights to Twisted Metal, so presumably any new ideas they had for the series had to be carried over to a new IP. I suspect Rogue Trip was that IP. On its release it was met with lukewarm reviews with a dusting of high praise despite offering almost everything that the genre stalwarts already did, as well as a few new and interesting tricks of its own. Not to mention it had a particularly eclectic soundtrack that was off its rocker, encompassing everything from ska and funk through to metal and electro.

What made Rogue Trip unique was that there was an additional point to all the metallic mayhem; a reason to fight; a common goal amongst all the combatants. That common goal (aside from the usual vehicle asploding) was a bunch of snap-happy tourists on vacation bumbling around each arena/map wanting little more than a ride to see and photograph the sights. As you taxied the tourists around you continually earned money, while parking at designated photo hot spots earned you even more as the tourists took their tawdry pictures. This money could then be spent on vehicle repairs and deadly weapon upgrades that would in turn increase your chances of being the last man standing (or would that be last wheels turning?). The only way to get a tourist back from somebody was to either blow up their vehicle or hit them with a ‘premature ejectulator’ which would panic the tourist and cause them to, er, ‘shoot’ out ready to be picked up again. I’d certainly panic if I was hit by one of those. Of course, there was only ever a single tourist per map vying for everybody’s attention and that was where the fun began.

Did you join the frantic rush to hijack the tourist early on and risk being dogpiled by all the other auto-mercenaries? Or did you bide your time, exploring the map for cash and amassing your arms ready to strike the hijacker (and its pursuers) at the right moment? Perhaps ambushing them at a photo op spot? Or did you just forget the tourist altogether and focus on destroying your enemies? Having the tourist was both a blessing and a curse. On the one hand, you’d be raking in the cash to upgrade your weapons and repair yourself, but on the other, you’d be a speeding death magnet attracting the wrath of every vehicle in the vicinity.

Sure, the aim of Rogue Trip was still to wreak havoc upon your foes, but having to hijack tourists to earn money to get better weapons to last longer made a refreshing change and gave the game a certain backbone or structure that remains largely absent in the genre. It was a simple idea that never really hit its stride and incidentally was left behind in the wake of Twisted Metal, which is a shame really. Thankfully, the new Twisted Metal, due for release in 2012 on the PS3, appears set to introduce some alternative game modes which sounds like a step in the right direction to me.

My brother Lewis and I lost many, many hours to Twisted Metal 2: World Tour and perhaps even more to Vigilante 8 with its dafter-than-Havok physics and punchy weapons — they were defining multiplayer games to us — but after spending that much time pummeling all types of vehicles in traditional deathmatch modes the two of us wanted something a bit different and sure enough, in the waning years of the Sony Greystation, Rogue Trip: Vacation 2012 provided it. It was a roughly-hewn gem, but more importantly, it was just damn good fun. Twisted Metal meets Crazy Taxi. Think about that for a minute while I go and have look on eBay.

Stay tuned for more installments of My Idea of Fun, whether group contributions like this one or individual rants. There are a lot of underrated games out there, Tappers, and you deserve to shoulder the guilt of not having played them!

15 Responses to My Idea of Fun: The Interloper And The Twisted Tourist