There’s a certain category of game that I have thought, for years, would work well on the mobile phone, and that is the First Person Robot Battler. This was a type of game that had some entries in the early nineties, but ultimately never took off as a genre. This is not, in my feeling, due to failure of  “first person robot battler” as a concept, but, rather, because Nintendo had a habit of tacking First Person Robot Battlers on to ultimately failed peripherals, such as the unwieldy SuperScope 6, or the awful, mockable, Virtual Boy.

So, for a while, I was enthusiastic (toward anyone who would listen for five seconds; this was an ongoing obsession of mine) about the prospect of moving this concept to the mobile phone. I feel a First Person Robot Battler is an ideal type of shooter for mobile for several reasons: 1) the target you need to destroy is clear at a small size, 2) it is family-and-casual-gamer-friendly (no blood and guts), 3) you don’t need to see the exact position of something under your finger in order to play the game. 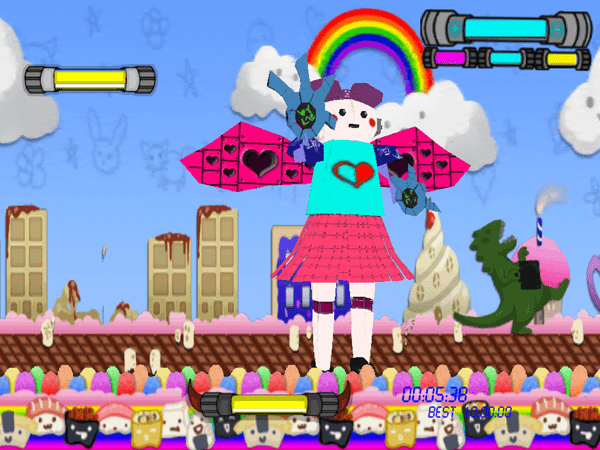 This game is called Cute Robot Destruction, and it is made by former students of mine from IADT in Detroit, chaperoned/aided by IADT professor Chris Castaldi. In this game, which is currently available for Android phones, and on its way to iPhone, you are presented with four different cute robots. The goal is to eliminate them, of course, no matter their cuteness.

The robots all have distinct designs and personalities; I think my favorite so-far is the 80s-New-Wave-inspired robot who “wants to rule the world, like everybody.” They attack you by shooting, and you do likewise, by tapping the screen with your finger. It’s not just as simple as touching the screen as fast as you can. Shots have a little lag on them, and you have to be able to predict where the robot is going to be by the time your shot hits, which isn’t always easy to judge. In addition, if you wait for a while before shooting, your shot powers up. A combination of slow, calculated shots on target areas, and quick, rapidfire shots to deflect incoming projectiles, is the key to a high score. 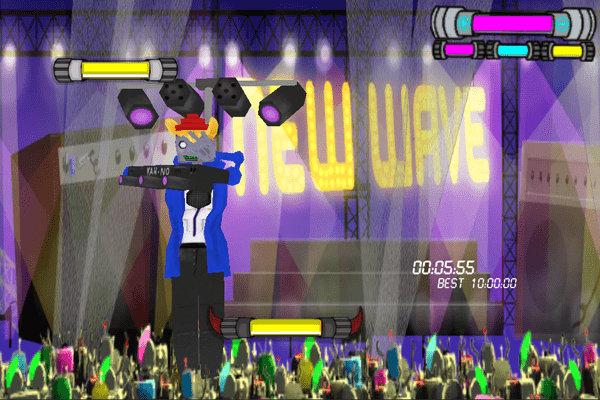 Right now, the game only has “time trial” modes, where the goal is to defeat the robot as fast as you can. I think a story mode, and some additional robots, would be welcome, and might be possible if the game sees some love and support! I will say there is one downside to the format, and that is that the game is not “put-down-able” – I mean this in the good way, but also in the bad way, in the sense that once you select a robot to battle, you’re committed for a few minutes to finish that battle and will have to stop in the middle if you get an incoming call. (In theory, that device you are using is still a phone.) Still, this is a fault of most all action games on mobile, and Cute Robot Destruction does its best to minimize it by keeping all the robot stages independent of one another.

The graphics and sound on this one still have a “work in progress” feel at times. But the game is pretty fun, and has a lot of potential for expansion. If you’ve got an Android phone, do check it out. Ignore the fact that I have a special thanks in the credits.