The final episode of The Walking Dead, Season One, dropped onto Steam this week. Now that the series is over, I’d like to take a moment to review that experience with a particular focus on the game’s narrative choice system.

My previous review was careful about giving too much away, but, this analysis will contain spoilers for episodes One through Four. If you aren’t totally sure if you want to read further, I’d suggest picking up The Walking Dead Season Pass and giving it a play before joining me below the cut. If you’re on the fence, know that it looks to be a Game of the Year nominee. And though I don’t ascribe ultimate importance to that award, I voted for The Walking Dead this year without hesitation.

For a long time, I’ve wanted to write an article about moral choices in games, but I’ve never really found its center. Then, The Walking Dead, a game all about choices, appeared.

The Walking Dead has some adventure gaming core, but it’s mostly about making decisions. That choice structure is what made the game series such a treat for me. The decisions aren’t always good versus evil, as they are in lots of games. They’re not even always important. The game structure is made up of countless decisions. Some are critical: whose life do you save in a pinch, if you can only save one? Others are subtle. Do you swear in front of a kid?

Do you kill in front of her?

Some choices didn’t  have the same long-term effects that it seemed as if they would. But some small choices seemed to matter more than it first appeared. What’s really fascinating, though, is that The Walking Dead gave us public stats, so we can actually see how players make the moral choices in the game. What choices are 50/50, without a majority answer? What choices are more obviously leaning toward one way or another?

If you believe the writings of game designer/academic Jane McGonigal, gamers are fundamentally good people. Statistically, this bears out. To clarify: it bears out if the statistics attached to games with moral choices are to be viewed as an indicator of overall moral compass. In a lot of cases, these moral decisions are fairly binary. Harvest the Little Sister for Adam, or save her life? Eradicate a race of aliens that wronged you, or show mercy? Shoot an orphaned kitten, or send it to college? Gamers in these cases are inclined – perhaps trained – to lean toward the “good guy” moral decisions.

Let’s examine, for example, a choice that a Walking Dead player makes near the end of Episode Four. 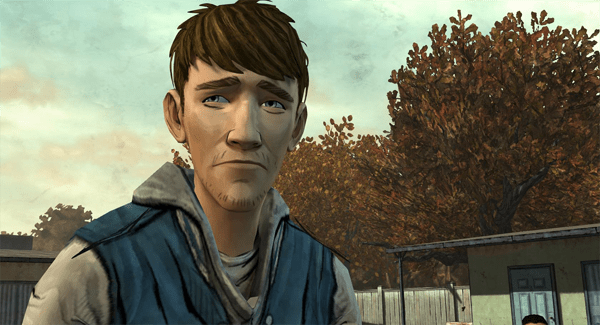 This is Ben. Ben is a kid that the player character, Lee, encounters in Episode Two. In Episode Three, Ben betrays the group in a way that sets off a chain of events that leads to a load of trouble. There’s no real consequence for him doing that. Early in Episode Four, Ben is shown to be cowardly and a bit unreliable. He has never been entirely likable. But he is still young and fairly innocent, as far as innocence in the zombie apocalypse goes.

Near the end of the episode, the player has Ben dangling, by one hand, over a bell tower full of zombies. Ben, feeling remorse for his earlier uselessness and bad behavior, tells Lee to go ahead and drop him. 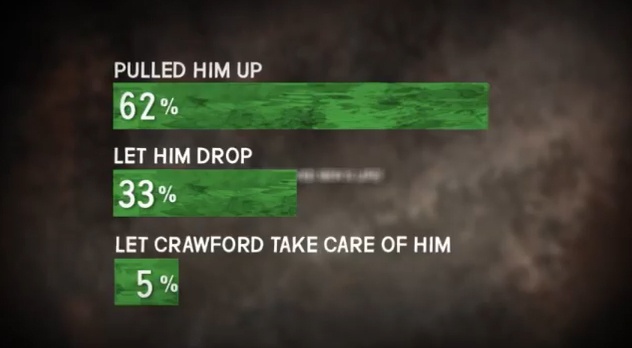 62% of players pull him up anyway.

At the end of the episode, Lee is bitten by a zombie. He can conceal the bite from his allies, if he chooses. But who does that? Only about 20% of players. Earlier in the episode, Lee is confronted by a stranger with a gun. He can try to threaten the man, or try to reason with him. Which action seems more “good guy”? Probably the one a third of the players took. 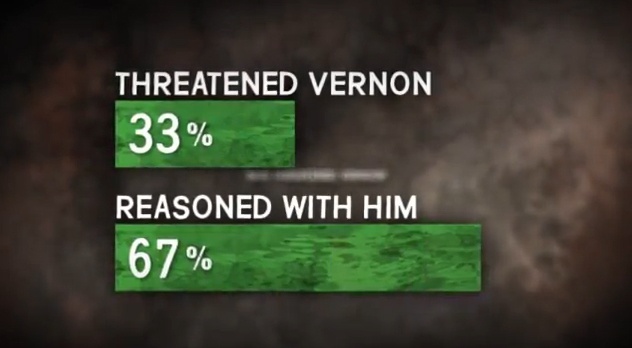 Episode Three, prior, has a some more challenging decisions than these. Lilly is a character who has been consistently difficult to deal with. During an argument, she shoots another character – a friend – in cold blood. Does Lee decide to abandon Lilly then, even though it means her certain doom? 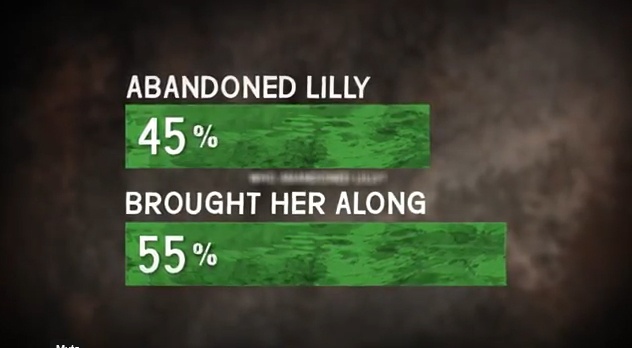 The softies won out, but that’s lots closer.

Okay, how about this? Another ally, Kenny, has been starting to slowly lose it. His son’s been bit by a zombie… and it’s only a matter of time before the inevitable happens. The time of reckoning is at hand, but Kenny doesn’t want to hear about it.  Lee could try to reason with him. Or… maybe knock some sense into him with his fists instead. 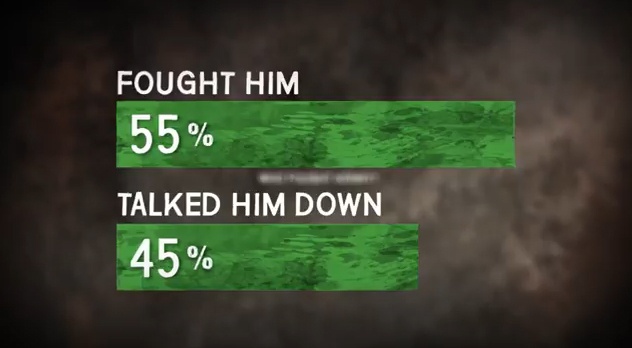 They finally got them!

How players make these game decisions fascinates me. This is purely anecdotal, but, I hear this one a lot:  “I’m doing my first playthrough good. I’m saving evil for my second playthrough.”

“my second Skyrim playthrough is evil,”
“I’ll do Legion my second time through New Vegas,” and even
“my second Mass Effect playthrough will be Female Renegade” (saving the non-default woman for second means she’s bad more often – I’d love to see the actual stats here!).

What’s this mean for developers? If maybe a third of players will get around to seeing your “evil” content, it’s a bit of a skewed equation if the evil content is a full half of the game.

Here’s a small spoiler for Skyrim. The best, most finished and feature-complete quest chain in the entire game is the Dark Brotherhood chain. Those quests overall feel more polished and thought-out than all of the other guild-specific chains. The NPCs in the Dark Brotherhood quests have more to do and say than NPCs that are encountered even on the main quest. This seems like an odd choice for the developers. Statistically speaking, people do not gravitate toward “evil.” Or at least, “Not on my first playthrough.” I have heard lots of gamers complain that they felt forced to do the (morally dark) Thieves’ Guild quests, as well.

In Fallout: New Vegas, the darkest faction in the game was Caesar’s Legion. If a gamer was going to join them, it was probably on “my evil playthrough.” Caesar’s Legion had a bit less faction-specific content than other factions. I’ve heard complaints about this too. But from a developer’s perspective, this is not a bad decision. If story content has to be cut, it would probably be weighted toward the content that the minority of players want to do. There is an unfortunate parallel here between things like including a female PC (minority choice) or including homosexual characters (minority choice). I am thrilled that Fallout: New Vegas chose to have these positive things in the game, and picked their battles with which content to expand on further.

“Saving evil for my second playthrough,” in my mind, completely nullifies the purpose of having binary moral choices in a game. The game no longer becomes about those choices in the least. It just becomes a simple equation of first testing one path, then (if the player gets around to it) the other. And too many games reward only consistency – whether you are all good or all evil – rather than individual choices.

Black & White is over ten years old now. It’s time to kill purely binary moral choices. Gamers are too savvy and have caught on to the way to play those games without having to think or feel. This doesn’t mean I don’t think we should play games a second or even third time. I love a game that wants me to play it again. But I’m just not interested in that second playthrough being the left hook on a one-two punch. Instead: challenge me every time. 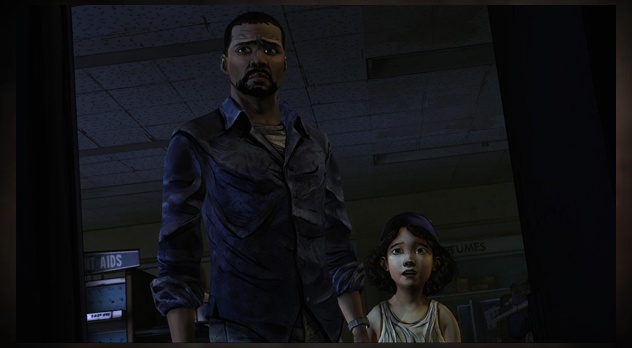 That in a nutshell is my wishlist for the second season of The Walking Dead. Make me feel, like you did before. I dare you.

I decided not to spoil the final episode of The Walking Dead here. I will say this: it was smart, there were some surprises, but it ended the way that it had to. I look forward to any future installments, but I don’t think I’ll play the first game series again. I made my choices the first time, for better or worse. I want to have to own them.

5 Responses to Difficult Choices in The Walking Dead