First, a quick shout out to the sim rally drivers out there. A collective lot that make squirrel-eating Uncle Jub and Aunt Jez seem like candidates for the White House. Rallying rocks – Yowrr!

This week, three drivers (red, yellow, and blue) are racing to the pub for a shot of Absinthe and the last pickled herring. 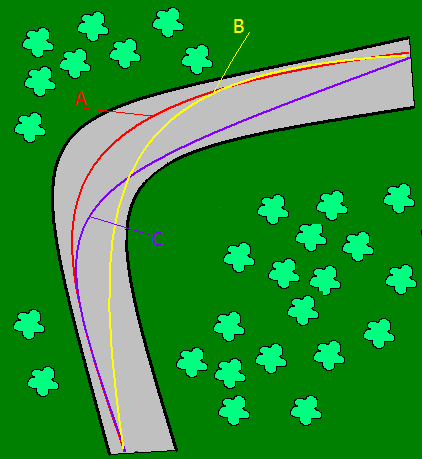 Red driver (a novice) has taken to approaching corners as fast as possible by braking late and trying to go as fast as possible through the corner.  The red driving line follows a curve with a smooth arc and a large radius that help to keep traction even though speed is high. Red driver resumes accelerating at point A, once it’s clear that he or she will stay on the road and miss that last large tree.

Yellow driver starts to turn in very early in an effort to go in fastest of all, braking while turning slightly taking the (near) straight line of deceleration go for as long as possible. Once yellow driver has also stablished that he or she wont hit the last tree, full acceleration can resume at B.

Blue driver gets the braking done earlier than the other two drivers, turns in sharply, and can accelerate out of the corner starting at C, far earlier than the others. The correct line will see the car carried completely out to the outside curb by the acceleration and gently unwinding the wheel. At first, it seems like the wrong  approach to fall sharply behind red and yellow at the beginning of the turn, but if the straightaway after the curve is long enough, the earlier acceleration and faster exit speed from the corner will more than make up for the initial setback.

To be sure, there are corner geometries where trail-braking (yellow) is the right technique. This simple curve is not really one of them as long as the following straight is long enough and there are no other nearby curves to complicate matters.

Drivers red and yellow react to falling behind blue driver by trying to go into the corners faster and faster. Going into the corner faster and braking later and harder than ever puts them ever more at risk of a catastrophe at the final tree and the knuckles start to whiten. Each driver is at great risk to unforseen  problems like a bump or bit of debris that reduces braking performance. However, this approach is tempting in that it feels like the exactly the right thing. Becoming more technically proficient at threshold braking, getting better at split second brake application, and getting all cramped behind the wheel feels like racing!

In contrast, blue driver has much more safety margin in the turn. No white knuckles, no sweat stained shirts. Perhaps the champagne glass on the central console develops a standing wave, but nothing serious. If this driver misses a braking point and goes in a little hot, there’s some buffer room. A little time may be lost in this case, but not the car. This approach looks deceptively slow and simple and it has the advantage of being easier on the car and the driver over longer races; even the simulated versions.

All three approaches are called a driving line but the line that most drivers agree is the fastest is called the racing line or preferred line. How does one discover the racing line on the Nordschleife with its many corners, so many of them blind?  Naturally, you download a document from the Internet describing it:

a twenty-eight page pdf document describing the ideal racing line for all the turns as well as various tips and tricks like this gem found on page eight:

“In doing so, you keep close to the curbs but never clip them! It is also important to find a sensible shift rhythm: if you shift up at the wrong time, the car unsettles. This section is tricky in the rain: the surface is as very slippery in the area of the first left-hander! A possible surprise: if you are training in the early morning, watch out for deer crossing!“

No wonder the insurance companies have given up on the place. Normally, I would learn the line for myself, but in the face of oncoming deer I’m willing to cut a few corners.

I keep a copy of this document in a binder to look up the right approach if I start to drift from the preferred line.  Long radius corners and corners where you can’t see the exit (or even the road surface) are very difficult and require lots of practice and patience to get right and keep doing right. When a passage that previously was easy now seems fiendish, I review the line and/or some earlier replays and more often than not a single correction is all that’s required.

This week’s time is down to a more respectable 7:21.523. At this point I’d say I have a pretty good notion of the sequence of corners but not necessarily the best sequence through them all.

2 Responses to A Tale of Three Drivers