At least one other person expressed interest in seeing how my attempt to clear out my Steam indie games backlog was going. After a holiday full of travel, I have returned home to once again check out some more games I bought this year, then never remembered to play.

The screenshot above is from physics puzzler NightSky, by Nicalis, and I will also be talking about Jamestown, the “bullet hell” shooter from (apparently local to me!) Final Form Games. I picked up both of these titles as part of the Humble Bundle 4 promotion recently. My impressions after the jump. 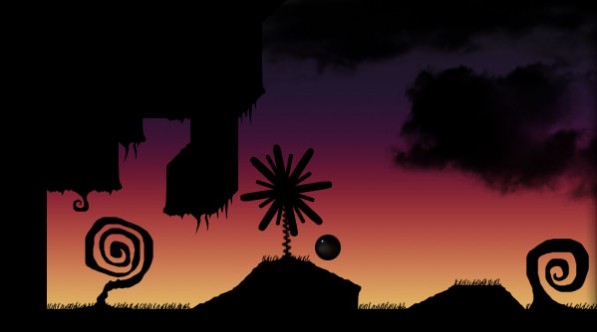 NightSky is a little physics platformer. When I say little, I mean that literally, since it pops up windowed by default and is the  size of the screenshot above. Your avatar is a little rolly ball (pictured center) that bounces around through different levels. I’m not trying to be flip about this, but the aesthetic is very “indie.” It might be well-described as “Limbo but with color” since you can see it’s all in silhouette, and it has little abstract Dr. Seuss swirls and creatures throughout. The overall effect is calming and pleasant, matching with the game’s smooth jazz soundtrack.
I would probably characterize it as a good coffee break game. It’s something you could do on a plane. Because it’s a physics game, it’s not actually as elegant as the screenshots may make it appear. Mostly, the ball just rolls about, with my input allowing it to switch gravity, speed up, or slow down depending on the level. It has a satisfying weight to it, but any reliance on physics in a puzzler game means I often spend a lot of time just slapping my avatar around until something is knocked loose. Aside from these moments, however, it doesn’t contain too much frustration.
I guess I could say that it is “nice.” Although the rocket launchers and stuff in the background make me worry that I’m missing some kind of buried metaphor for an alien war.
So anyway, Jamestown is a game about an alien war.

One of the cool things about independent games is that they can come in and just exemplify the hell out of a relatively obscure genre, making it accessible for uninitiated gamers. In my last backlog entry, I dug in to a roguelike and a tower defense game, which, respectively, are one genre I love to pieces and one I generally dislike. Jamestown, on the other hand, is a shoot-em-up (or “schmup”) of the “bullet hell” variety, and I came in with no particularly strong opinion about the genre. I would say my favorite schmups are the indie Warning Forever and SquareSoft’s either under-rated or just plain obscure title, Einhander. Neither of these qualify as bullet hell games. A friend recently tried to introduce me to the Touhou series, but it’s really hard to get past the aesthetic of these games to see if I enjoy the action.
Along comes Jamestown, a bullet hell game I can play without feeling as if I should be put on a list. In this game, as with all games in the genre, you pilot a very small craft that  shoots a lot of bullets. The craft has a very small hitbox and is fragile; it can only take one hit before being destroyed. On the bright side, it’s very precise and maneuverable. I’m using the mouse to play this game, but my experiments with the keyboard and a gamepad have all been equally responsive to my inputs. This is a good thing, since the entire point of the game is that things will shoot a lot of bullets at you. 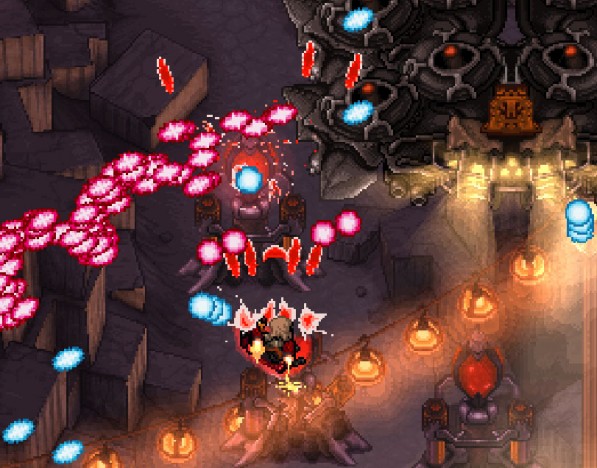 It’s hard to take good screenshots. I’m very busy trying not to die. Right now, the “Legendary” difficulty has my number, but the game is hard but fair and each time I attempt a run I can see where it’s an improvement over my previous attempts. I would say, with only limited experience, that the game is more forgiving than Touhou, which is a good thing if you’re not a big schmup player. Each level is treated separately from the level before it, and extra ships and continues reset. A “gauntlet mode” allows for the classic experience of having to navigate all the levels in a row, but is an option that needs to be unlocked. Overall it’s designed as an entry to the genre and it does this job very well for neophytes like myself.
I find steampunk very hit-or-miss: it’s awesome when done well and laughable when done poorly. Jamestown is steampunk done well. The plot imagines that the British colonies of the new frontier were on Mars, instead of in America. Spanish conquistadors, teaming up with Martians, create horrible war machines, and some re-imagined historical figures play key roles. That being said, it’s hard to give the story a close read when there’s this much action going on. Suffice to say that the genre choice makes for cool enemy designs and very appealing graphics.
The game also has a fabulous soundtrack, which I know I’m going to be putting in my playlist right away. I started out not sure if this game would be for me, but I’m really enjoying it, and very glad I picked it up as part of the bundle. Final Form: I’m a fan! Let me buy you lunch or something.

9 Responses to More Adventures in my Steam Backlog: NightSky and Jamestown