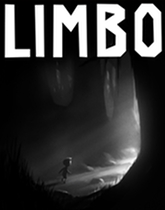 Uncertain of the fate of that fifth point (out of five), a reader ventures into a Limbo review…

In Dante Alighieri’s Divine Comedy, Limbo is the first circle of Hell.  It is a generally unhappy place, but not full of the eternal torment of the lower circles; the people who end up in Limbo really didn’t do anything to be there but live before Christ; it’s where everyone who didn’t really do anything wrong, but died without having an opportunity to know Jesus (either because they predated him, as with many of the Greek and Roman figures in Dante’s epic, or because, perhaps, they were infants who died in childbirth or some similar tragedy), and thus could not have been cleansed of their original sin.  It’s a place where perfectly good people are locked away despite being quite innocent of anything, really. 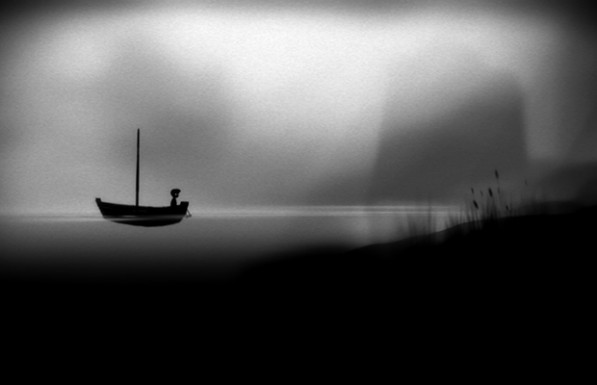 The meaning of Limbo is really to teach a few life lessons: learn how to swim...

Limbo has been making waves since its original release on the Xbox Live Arcade a little more than a year ago (at which time Mat C reviewed it) for any number of things: its art style, its puzzle design, its ambiguous, but no doubt weighty, meaning.  It’s one of those games that’s been called “perfect” so many times that it should be no surprise that it has, in the last few weeks, hit most other major platforms.  And Limbo will, I have no doubt, go down in the history books alongside other indie hits like Braid, with which it shares token similarity.

And frankly, you’ve never seen anything like Limbo before.

Limbo‘s presentation is nothing short of incredible: minimalist but detailed, unique, atmospheric, eerie.  The look of it, the sound design – subtle, suggestive music combined with pitch-perfect sound effects – create the desolate and alien world of the game.  Where are we?  It’s hard to know – maybe some rendition of Dante’s Limbo, or another based on the religious concept, or indeed somewhere not intended to be supernatural at all, the name merely a reference to – what?  That’s left up to the player to decide.  That’s probably Limbo‘s great rhetorical strength. 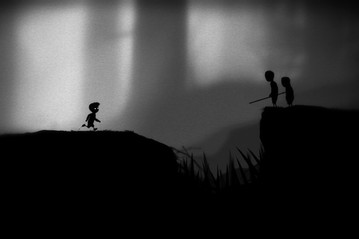 There is no guidance to the story in Limbo beyond the blurb that you’ll find in its Steam description: “Uncertain of his sister’s fate, a boy enters LIMBO.”  And so this boy – quite literally “bright-eyed” and with rollicking animations that make the horrible things that you put him through (over and over and over) seem as inhumane as they are – joins the oldest gaming profession in the world: girl-seeker.  This seems to be the nugget of great minimalist game narratives, because games like Braid and ICO (which Limbo reminded me of pretty strongly) use the same formula, if with a different flavor.

His sister is, presumably, at the end of his short but intense quest, which starts in a dark forest and progresses through what’s left of civilization here, an industrial nightmare.  And the boy has to do some nightmarish things, like drag more than a few corpses around to solve puzzles.  It’s morbid, when you think about it, but the two-tone graphic style keeps things oddly sterile.  Until you think about it.  Then, yeah, a vague sense of creeping horror might come over you.  And that might last until the next set piece, when the game shows you something else pretty amazing, but never with the caveat that it’s just pretty to look at.  Each moment is a gaming experience as much as a visual one.  They’re juicy.

The boy has a small arsenal of moves – just the arrow keys for movement, which work pretty well, and the CTRL key for actions.  With this, PlayDead forges dozens of excellent puzzles.  No two are quite alike; none are retreads of earlier puzzles.  And though they ramp up in complexity, they don’t become punishing.  (Mostly.)  Solving these puzzles will require the boy to die.  And die.  And die.  He’ll be dismembered, eaten, shot to pieces, bludgeoned, crushed, impaled, gored, arrowed, electrocuted, and drowned.  Fortunately load times are quick and checkpoints numerous.  Rarely will you need to redo much.  I don’t like playing platformers with a keyboard, in general, but the controls are tight enough that this was a minor inconvenience – still, if you have a gamepad for your PC, plug it in. 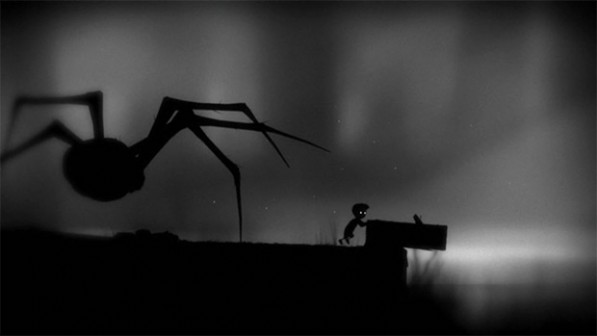 ...and OHMIGOD IS THAT A SPIDER?!? AAAAAAAH!

Which brings me to the part where I register what, I think, is a firmly dissenting opinion in the world of game criticism, and that is that Limbo is brilliant but imperfect.  Somewhere along the line the roar of circular saws and crackle of electricity just became old.  A few puzzles in the last quarter of the game relied a bit too much on fine timing: one, in particular, took me a good twenty minutes to manage though it had only taken me the first of those to figure out what I needed to do.  And this – this broke Limbo for me.  After that the game felt like a chore, and it didn’t help that the later puzzles involve enough little pieces that dying in the process (which will happen) forced me to redo several little pieces.  Again.  And again.  I dimly remembered, as I neared the end, when I played this game not with frustration, but wonderment, a mere few hours before.  Compared to the first half, the second half feels plodding.  And though the climax reminded me how incredible the game could be…well.

Everyone will have their own thoughts on what Limbo means.  It is, for that reason alone, well worth playing.  I won’t contaminate your experience with my own opinions – I’ve formed them, certainly, and will probably continue to refine them as I distance myself from the experience.  As an English major, I couldn’t help but be reminded of Dante.  The world is not always just, and sometimes we find ourselves somewhere we don’t really deserve to be.

Email the author of this review at dix@tap-repeatedly.com!