I have spent more money on gaming mice than the average resident of the Republic of Kyrgyzstan makes in a year. As if it weren’t already established fact, this officially makes me a Terrible Person.

What’s worse is that, on average, these mice last maybe a week or two. My ongoing and doomed quest to find the perfect gaming mouse is perennially thwarted by a reality that is as true as it is completely outside of my control.

It’s that the people who design gaming mice don’t actually have hands.

There is a simple recipe for making a good gaming mouse. It’s not much harder than making sure you put the buttons someplace people can actually reach them. But of course, if you don’t have hands, you have no frame of reference. Which results in mice like this: 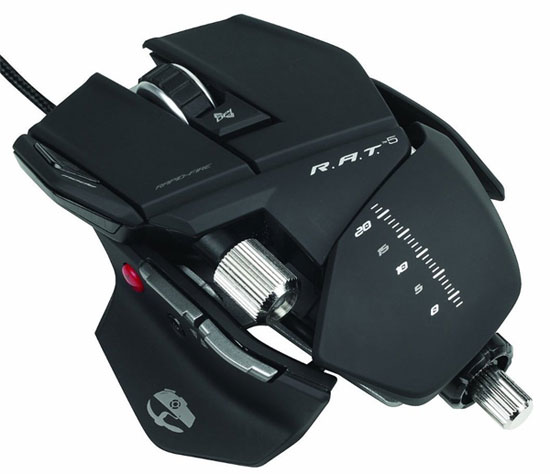 That’s the Saitek Cyborg R.A.T. 5, my current and newest rodent. I bought it to go with my new PC on account of a favorable review in Maximum PC and the promise that it was “the most adjustable gaming mouse in the world.”

That latter may actually be true. The thing comes with a bunch of built-in knobs and screws that you can use to change the whole shape of the mouse, plus three or four different snap-on chassis of varying texture, width, and height, supposedly to accommodate any gamer’s paw.

I don’t like it very much. After spending hours snapping parts on and off, rotating knobs, swapping out the included weights, and messing with the awful software, I have a mouse that’s no more comfortable or easy to game with than any of the others I’ve used. It’s not the worst I’ve come across, not by a long shot, but it’s hardly the most comfortable or feature-rich. The palm rest digs unpleasantly into the heel of my hand; the thumb buttons aren’t anywhere near my thumb; the RMB clicks too easily while the LMB requires 35 pounds of force. The thumb scroll wheel is not programmable and doesn’t have a click. The “sniper” button is too hard to reach and can’t be reprogrammed. The bundled software is annoying. Sigh. 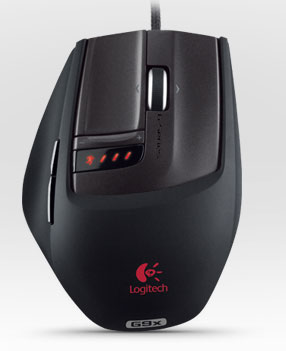 What you see there is a Logitech G9x. And chances are I’ll be going back to it sooner or later, because though I hate it, I think I hate it less than its replacement.

Logitech’s got a long history of producing gaming mice, and this one is okay, but I’m vexed again by the placement of the thumb buttons (the thumb naturally goes up and down, not forward and back, in this position), and by the overall dearth of programmable buttons. I don’t need to change my DPI on the fly. No one does. And I certainly don’t need LEDs that change color at my whim. I’d rather Logitech had focused a little more on ergo design and more buttons (and, again, better software) than pointless bells and whistles.

Seriously, just looking at the G9x I can see like four places that’d be perfect candidates for additional buttons. Once you reach a certain threshold in sensitivity – a threshold which, I might add, mouse manufacturers have long since passed, to the point of absurdity – a gaming mouse is about packing as much functionality into an ergonomic shell.

If mouse designers actually had hands, they’d find their jobs very easy. But they do not have hands.

The mouse I’ve owned with the most potential was the Microsoft Sidewinder, circa… about 2006 I think: 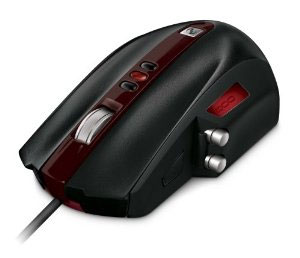 You know what makes this Sidewinder so great? The vertically positioned thumb buttons. In no other gaming mouse anywhere have I seen thumb buttons that actually match the way the human thumb works. Plus these aluminum buttons had a great, hefty click and a smooth finish. Sure, I could have done without the digital display, and as with the G9x there’s room on the Sidewinder for more buttons than they actually put there, but in general you cannot beat this mouse… were it not for one problem.

The god damned thing is the size of a toaster oven.

You can’t get this model any more, but back in the day I took a gamble (having been warned in an otherwise glowing review that the thing was obnoxiously huge) and bought one. This was a mistake. My hands are not huge, meaty paws. I wouldn’t go so far as to call them dainty, but at 5’7″ I’m on the smaller side for a dude and my hands (my everything, actually… alas) are true to form. I couldn’t even get my mitt around this thing. I gave it to a friend with giant ogre hands, and to my knowledge he’s still using it, the bastard.

After the Sidewinder and before the G9x was a period I like to call “The Razer Interlude,” when I owned an assortment of mice from the company that actually invented the concept of boutique gaming mice. 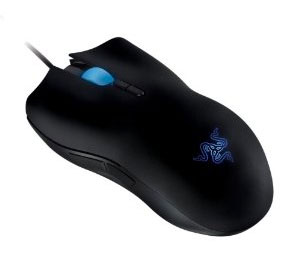 To a great extent, I can pin all my current complaints about gaming mouse design on Razer, which innovated the space in 1999 with the Boomslang, a ball-mouse that retailed well north of $100 (the one to the left is a Lachesis, which I replaced with the G9x) and sold so poorly that Razer actually disappeared for a while, before returning with an “improved” line of extraordinarily expensive gaming mice.

Razer was one of the first to add thumb buttons, and it was the first to put them in the wrong place. All other manufacturers have followed suit. Meanwhile, the Razer Diamonback (which I owned before I got the Lachesis) featured a pair of “pinky” buttons that were actually operated with the ring finger if you could operate them at all, which you couldn’t because as usual the buttons weren’t anywhere near the finger that was supposed to push them.

Each of the mice you see here brought some good stuff to their design, but none are ideal… let alone perfect. At this point I’ve kind of given up on finding the “perfect” gaming mouse, though this won’t stop me from trying. On the shelf behind my computer lies a row of perfectly good, often $100 mice, their cords wrapped around them, sitting dormant and idle. Each has failed me in its own way, and the R.A.T.5 is likely to join them shortly.

But where I’ll buy tomato sauce on sale and eat generic brand cereal to save a buck, where I’ll agonize for six months over the purchase of a new video card, when it comes to mice I’m like a shoe-shopping teenage girl from Beverly Hills. No extravagance is too great, even though I know perfectly well it’ll gather dust on the shelf sooner rather than later. To the citizens of Kyrgyzstan, I apologize.

On the Perils of Over Anticipation