There has been some grumbling going on within the MMOG community at the reveal of Guild Wars 2’s Engineer.

Protests from fans that it’s a joke or a wind-up, mixed with moans of “Grenades?! Turrets?! Ugh…” are seemingly common place at the moment, as the prospect of a technologically advanced class slips into a fantasy heavy setting…

It’s surprising to hear and read the complaints, that such a class doesn’t fit within the lore or setting; that it’s too advanced. Yet the same community were (and still are) accepting of the Charr Iron Legion and their magical technological advancements of flying contraptions and steam powered vehicles. Both of these resulting in huge levels of excitement. But to suggest primitive grenades, mines and clock-work turrets? Well that is surely beyond the acceptable.

With 250 years having passed between Guild Wars/Guild Wars 2 and the advancements this would naturally bring between the melding of Asuran magic and Charr technology, it’s 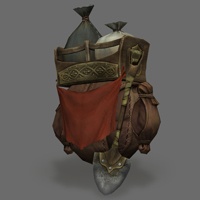 An Engineers Mine Pack

difficult to believe that contraptions of this nature wouldn’t appear.  Having already revealed flintlock pistols and rifles, is it not only a small step to put the basic principals of these weapons into another form?  Gunpowder and fire evidently appear in abundance within Guild Wars; a universe that has been forced to adapt to new challenges.

But failing to suspend your disbelief into accepting these new contraptions makes little to no sense, when we are so willing to accept pistols and rifles, and worse; shape shifting Norn, magical Golems and classes that can raise the dead.

It is true that these more magical elements do fit comfortably within fantasy lore, yet steampunk is as prevalent in games now as witches and wizards. Thief, World of Warcraft, Skies of Arcadia, Torchlight and The Chaos Engine have all over the years represented a modern twist on the ‘fantasy blueprint’.  For ArenaNet to absorb this material as heavily as they have through the Charr and now into a class, shows a greater commercial acceptance of steampunk; that the genre is not restricted to fairies and firebolts alone.

Where I believe the objections stem from is that players and members of the community are not comfortable with objects that remind them of real life (we do try to escape it, after all).   The Engineer’s name is a modern world occupation, ‘grenades’ appear and act as a modern grenade would, whilst turrets echo automated sentries from the likes of Team Fortress 2, Brink and Aliens so heavily that it feels like we haven’t only fast forwarded 250 years, but 1000.

Warhammer Online in many respects has beaten ArenaNet to the punch (which I must add shows another of Mythics influences on Guild Wars).  The Engineer between both games, on paper, is very much the same; grenades, knockbacks, flame turrets, rifles and pistols all going to make a tactical area defence class. To anyone with doubts as to how Guild Wars 2’s Engineer will play, I suggest you seek out Warhammer Online’s free trial, though ArenaNet’s already looks more competent.  What ArenaNet now need to ensure is that they scale the damage of turrets and grenades so they are always useful, as Warhammer Online’s were often forgettable and ignorable.

If I were to suggest only one visual change to ArenaNet’s Engineer, in order to address these uncomfortable real life parallels, is that they should firstly remove grenades in their current form, and instead have them as bottled liquids. Frost, Oil, Poison, and explosive flash-bang potions would create an air of alchemy and madness to balance a mechanical class; that those who dabbled too far into Charr iron work and Asuran magic are on the cusp of power and destruction, as opposed to the clean image currently portrayed.

But to continue as many are, in complaining that the Engineer does not ‘fit’ is as silly as suggesting dragons are real. MMOGs are fantasy games where disbelief must be suspended to not only be involved, but to be drawn in.   As the creators of their own lore and intellectual property, whether we like it or not, ArenaNet have implemented a new to fantasy to their own creation.

What does concern me most however, is if this is the reaction to the Engineer, God help ArenaNet when they reveal the Mesmer…

Games I played in 2014 and thought were gud.