A question I’ve been mulling over for years now, is why is there not a Pokémon MMOG?

It’s startlingly obvious and has genuinely remained on my mind for far too many hours lately. Considering Pokémon has sold in excess of 100 million units world wide, since the launch of Pokémon Red and Blue, I am stunned it isn’t already in production (although it should be noted Nintendo have squashed some fan attempts). What is even more surprising however, is the ease in which creating an MMOG within the Pokémon universe would be…

Having played Pokémon Red for over 500 hours and Pokémon Silver for over 600 (you can thank my brother for wiping my save, but that’s another story) it’s fair to say I’ve significant experience of the games.  But what is apparent within Pokémon is that the games themselves are already akin to an MMOG, but one that is simply offline.Character creation (although simply a gender selection), personalised stories, combat, trade, an expansive game world and the necessity to undertake a continued levelling process are all traits of the current MMOG.

The focus of any MMOG however is primarily the game world.  A vast expanse awaiting adventure, urging the player to explore and roam freely.  The existing Pokémon universe is so large, made even more tantalising by Pokémon Black and White’s latest additions, it would undoubtedly be the perfect playground for budding explorers.  The mixture of contrasting themes and continents is an exciting prospect, and one which would lend itself better than most current game worlds.  The “lore” is already written.

Water towns to tree-top jungles, volcanic ash strewn mountain ranges to cave systems, lazy villages and haunted towers. The possibilities of exploring them in a free-form open world would be unparalleled, made all the more tantalising if rendered in luscious, vivid 3D. 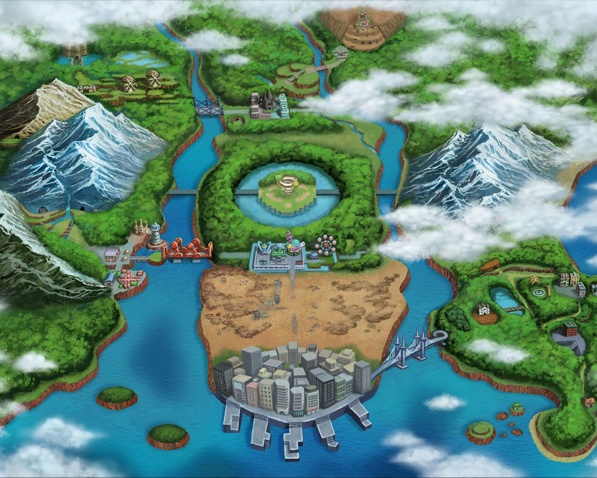 1. Unlike in the hand-held versions, Pokémon would roam freely around the game world, just like in Pokémon Snap and dependent on their character, would act accordingly to your interference.  Herds of Doduo roaming grassy fields, dozens of Caterpie slinking along tree branches or Sandshrew tunnelling under your feet; the sight would be awe inspiring.  Bringing what are often static MMOG game worlds to a new level of “life.”

2. Players would start out at a character creation screen with depth of customisation similar to Aion or EVE Online, before beginning in a personalised instance where your story unfolds (see Guild Wars 2). After choosing your starting Pokémon and completing your first steps, you would leave to the open world.

3. Played from 3rd person, you would navigate similarly to existing games, however due to the low quantity of skills and actions needed, the ability to truly play on a joy-pad would rival all current MMOGs and bridge the gap between PC and console play. Quick access to your Pokémon could be assigned to the D-Pad while calling and re-calling your Pokémon would be a trigger.  Utilising skills (Pokémon only have four) would be assigned to main buttons.  Should you be attacked by wild Pokémon, your character would automatically throw your first assigned Pokémon, just as MMOGs allow you to auto-attack.

4. Fundamentally the speed of Pokémon battles would need to increase significantly.  Pokémon when previously transferred to 3D has been a laborious mess that gives no sense of excitement or real control.  What needs to be implemented is free control over your Pokémon, to give a true element of skill and reaction.

When taking part in a battle, whether with another player, an NPC trainer or a wild Pokémon, your character would become static after calling your Pokémon (a dual control system similar to Guild Wars 2’s Death Shroud) with automatic animations of encouragement, disappointment or fear played out.  You would then take complete control over your Pokémon after it leaves the Pokéball, with free movement equal to Guild Wars 2 (strafing, jumping, walking, crouching and rolling) allowing you as the player to dodge incoming attacks.

Skills would be activated instantly by selecting the appropriate button, however due to battles no longer being turn based, a global cooldown similar to other MMOGs would be implemented to ensure skills could not be continually “spammed.”  As a result, fights would be as fast and frantic as existing “twitch” based MMOGs.

Should your Pokémon be low on health and you wish to switch (indicated by your Pokémon’s health bar) simply press your re-call Trigger (or key) and your Pokémon would disappear for your next choice to be deployed. In the interests of keeping a battle unaffected by external Pokémon roaming near you, you would become “passive” and un-targetable until the duel is over.

5. As for your Pokémon badges, there would be NPC trainers just as in the current versions, however these would be “instanced” like existing MMOG dungeons, to ensure everyone had an equal opportunity to obtain badges.  A system of “Arena” tournaments similar to World of Warcraft (1v1, 2v2, 3v3) would lead to additional prizes, riches, Guild competition and end game content.

6. In game cutscenes (see Guild Wars 2, Aion or even World of Warcraft: Cataclysm) would be common place to encourage your personal story, while questing for NPCs throughout the world would replace the need to grind. If we’re being really adventurous, implementing Dynamic Events would be a trump card.

7. Instanced player housing, with the location determined by you would give you and your Pokémon a place to rest (there would be weather, alongside night and day cycles) and the use of Bicycles would replicate existing mounts within other MMOGs.

8. In terms of trade skills, there could be multiple choices:

So there we have it.  World of Pokémon in 8 points (I think the rest of the game would simply write itself).

12 Responses to World Of Pokemon?