I’ve been playing Ninja Theory’s Heavenly Sword. I like it a lot.

Pitiful but unsurprising. I saw it coming. I saw it coming even though those who played Enslaved have almost universal praise for it. So I want to buy it because I get what they were going for with Heavenly Sword, and I have a feeling that they got closer with Enslaved, like Quantic Dream did when it went from Fahrenheit/Indigo Prophecy to Heavy Rain.

What were they going for with Heavenly Sword? Like Quantic, they were trying to make a game with feeling, something heartfelt, to include a depth and richness of character not normally seen in this style of game. Not a game that plays like a movie, but a game that feels like a story. Themes no one’s bothered to explore in games, alongside a visual presentation that’s nothing short of breathtaking. A fantastical, dreamlike adventure that makes an effort to include heart, and succeeds.

The Heavenly Sword is a… well, a sword from heaven, made by a god and everything. This tribe has guarded it for generations, and a prophecy says a that on a specific date, a chosen son will be born to wield it when it’s needed. But when the day rolls around, it’s not a chosen son who’s born. Her name is Nariko, and she’s hated and ostracized by the entire tribe, even her father (Mom died during Nariko’s birth, natch), simply because she was born a girl. It mucks up their prophecy. Thus when evil King Bohan – played brilliantly by Andy Serkis of Gollum fame – threatens the tribe and by extension the world, giving the Heavenly Sword to Nariko seems just scrotum-pulverizing to her chauvinist, god-blinded tribemates.

Nariko, meanwhile, was kicked and shat on and vilified by everyone, and grew up an angry, confused young woman who nonetheless takes up the Sword. Not because she wants to, and not because she has to, and not even to prove anything, but because even as cruel as everyone in her life has been to her, her tribe is still her tribe. Her Dad is still her Dad. You can’t choose your family, but you have to be there for them.

Nariko’s played equally brilliantly by the delicious Australian actress Anna Torv, before she found fame in Fringe. Torv captures Nariko’s rage and conflict very well, as the writers of Heavenly Sword do a good job communicating it. There’s one moment when she snarls to herself that sometimes she prays the Sword is just a sword, that it was never made by a god, that it’s not from heaven, that her whole stupid tribe has been worshiping this ridiculous hunk of metal and it’s nothing, it’s no more special than a shoe or a broom. The bitter vindication such a thing would bring might be satisfactory payment for all the years of unkindness and unlove she’s suffered, so she could laugh at them as they stood dumbfounded among the ruins of their faith.

As satisfying as it would be, it’s not so. The Heavenly Sword transforms Nariko into a hurricane of destruction capable of slaughtering entire armies, even as it’s killing her moment to moment. From the instant she takes hold of it, she has just days to live. The power of gods isn’t meant for mortals to touch, even chosen mortals. It seems a comment on pride, or rather Pride – gifts from the gods shouldn’t be used even if the gods say it’s okay, because to touch the divine suggests self-comparison to the divine, and one thing all religions seem to hate is when people start thinking they can reach that divine level. 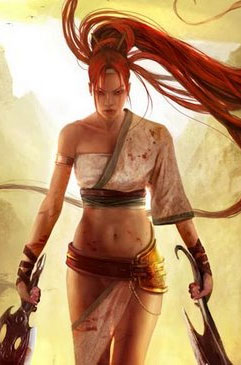 I do find it somewhat unbelievable that everyone in her village would hate her, as Nariko is spank-bank material of the highest degree and clearly knows it. She goes into battle in a completely unsuitable outfit – hell, it would be unsuitable for a brothel (and once again you’ve got someone in a video game trying to save the world without adequate knee and elbow protection) – and she sports Rapunzel-length red hair that’s beautiful enough to be worth the trouble it surely is to wash. Ninja Theory uses all this less to be lascivious (though, damn) than to show off their frankly incredible motion and facial capture capabilities. Heavenly Sword was intended as one of the key technical platforms to showcase the power of the PS3, and it delivered. The presence of Andy Serkis as both a voice actor and mocap asset was of tremendous value to Ninja Theory. It wouldn’t be until Uncharted 2, which used all the same actors for voice and mocap and had them do both performances at the same time, and Heavy Rain’s facial and movement capture technology, that this game would be eclipsed… and even that’s arguable. Because of this the gameplay has a wonderful visual fluidity that the controls unfortunately don’t measure up to. But more importantly the characters seem unbelievably human. Ninja Theory skirted the Uncanny Valley by ever so slightly stylizing them, and created individuals with whom you can share a real emotional bond.

A PS3 exclusive, Heavenly Sword achieved pretty good reviews and has moved 1.5 million units since its 2007 release; a million of which happened after the game’s tenth week on store shelves. The first ten weeks are crucial, so Heavenly Sword had a surprisingly long tail. It’s sad that the multi-platform Enslaved, which by all accounts is a far better game, has moved less than a third of that in its 16 weeks at retail. It is technically far superior, enjoyed better reviews, includes Serkis as actor and director, and was penned in collaboration with talented screenwriter Alex Garland. I know a lot of reviewers and critics who believe it will be a major award winner despite poor sales; several have even bandied about “Game of the Year” in conjunction with Enslaved. But no one bought it, it was an expensive game to make, and a retail failure of this magnitude might put Ninja Theory itself in danger.

But I am going to reward Ninja Theory by buying Enslaved, which I had not intended to buy simply because I have too large a backlog, and I am going to do it because I get what they were going for with Heavenly Sword. I get it and if they’re going for something similar in Enslaved, that’s the kind of thing games need more of.

31 Responses to How Ninja Theory Earned $60