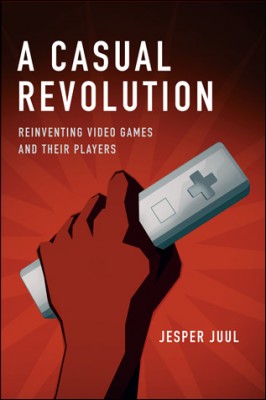 Review by MrLipid
A Casual Revolution

“Let’s start with the hype. A Casual Revolution is terrific. A succinct, informative, thoughtful examination of the forces that have been, as its subtitle says, reinventing video games and their players. Oh, and on top of all that, it’s just plain fun to read.”

Jesper Juul thinks deep thoughts about games. As Visiting Assistant Arts Professor at the New York University Game Center, it’s what you’d expect him to do. But you might not expect him to be having so much fun while he’s doing it. Then again, he was playing games before he was studying them and continues to play them now.

The main theme of A Casual Revolution is this: Video games have gone mainstream. To support that thesis, Juul takes us through, among other things, the history of the card game of solitaire, starting with Lady Cadogan’s Illustrated Games of Patience, published in England in 1876. A hundred or so years passed and then Solitaire appeared on Windows 3.0 in 1990, causing Steve Meretzky to argue that it was the beginning of casual computer games as such.

Juul devotes an entire chapter to the origins and development of “match three” games, such as Bejeweled, characterizing them as “one of the only game types  with no vocal proponents, only critics.” Juul uses match three to distinguish between what developers would prefer doing (not match three) and what customers find appealing (more match three, please).

Juul also takes us back to the more recent moment when the Wii first appeared, was roundly condemned for its feeble graphics, underwhelming CPU and general toyishness, and then proceeded to take over the world. The Wii’s mimetic interface (the Wiimote “mimics” the actions a player would go through if actually bowling, golfing, tennis, etc.) was ideal for casual, pick-it-up-and-play gaming. (Other games featuring a mimetic interface include Guitar Hero and Rock Band. And with the release of Sony’s Move and Microsoft’s Kinect, we’ll see what sort of game libraries develop for the consoles that were not designed to appeal to casual gamers.) Juul notes that casual gaming was what he was looking for without knowing it: “I now have meetings, papers to write, trips to make, and it has become harder to find the long stretches of time required for playing the large, time-intensive video games that I still love. Casual games just fit in better with my life.”

Juul then lays out just what constitutes the difference between the games he used to play (and enjoy) and the games he plays today. He examines and contrasts five characteristics: fiction, usability, interruptibility, difficulty and juiciness. Fiction refers to the world the game offers its players, usability refers to how quickly a player can begin playing, interruptibility refers to how easily a player can stop playing, difficulty refers to how challenging a game is and juiciness refers to what sorts of rewards a game gives its player as incentives to continue playing.

Core (what used to be called hardcore) gaming tends to be negative in its fictions (Juul uses “vampires and war” as shorthand), not immediately usable (Civilization IV, anyone?) or interruptible, exhibits a high level of difficulty and is variable in terms of juiciness. Casual gaming tends to be positive in its fictions, immediately usable, highly interruptible, and more difficult than might be expected. The difficulty is softened with juiciness. A setback in a casual game does not mean the game must be replayed from the beginning. One cannot make a fatal, game-ending mistake in Peggle.

Looking at in evolutionary terms, modern electronic games started out in the arcade with the goal of separating players from their quarters. Games had to be enticing enough to attract everyone’s attention, easy enough for just about anyone to play, and difficult enough to require endless restarts from those who decided to keep playing.

Early home consoles picked up the “win or game over” style of arcade play, only grudgingly coming to the idea of save points to allow gamers to have a non-gaming portion of their day. After all, the gamer has already bought the game. Once the console is attached to the TV, there is no longer any need to endlessly extort quarters in order to keep the game going.

As the computer became a platform for gaming, the old arcade rules persisted, mutating from simple games played until one won or lost to complex games that required a massive investment of time and deep familiarity with genre conventions. Gamers of a certain age will remember, perhaps fondly, the big game boxes, the bulky manuals, and the cheat sheets that listed all the essential key combinations. Gaming became a hobby for those able to concentrate for hours at a stretch. Meretzky feels that gaming began to become a niche activity around 1980 and stayed that way until Solitaire showed up a decade later. After that, gamers began to separate into, broadly speaking, two categories: those who sought to test themselves against a core experience and those who preferred more casual diversions. And, as Juul points out, a single player can claim membership in both categories by playing core games casually or casual games from a core orientation.

At the same time, a huge amount of effort and a massive investment were being dumped into improving the graphics capabilities of both computers and consoles. High definition televisions when connected to the latest and most powerful generation of consoles promised to equal or surpass computers in terms of graphic splendor. Massive screens and surround stereo would be, on more than one level, game changers. At least, that was the expectation. After all, hadn’t the core audience been clamoring for this sort of technology?

Maybe. But there was a group of gamers which had been growing since 1990 that wasn’t particularly concerned about such things. A group that, today, is perfectly happy playing games whose recommended specs (taken from a recent Big Fish Games title) are in this rather quiet neighborhood:

Or enjoying a bit of bowling or golf on the Wii or going portable with a DS. Or even downloading a playing a game on, of all things, a phone.

What was going on here? One way of putting it is that the technology was now mature enough to offer simple and engaging experiences on a variety of platforms. (Mature as in “not feeling compelled to show off every capability in every scene” — like those ill-conceived 3D epics that are forever tossing items at the audience to remind them that they’re paying to experience something in 3D.) The audience for these simple and engaging experiences had begun to form in 1990, one hand of Solitaire at a time.

Gaming as an activity had gone from core to mainstream. Surveys revealed that the typical gamer was more likely to be an older woman than a young male. The social component of playing simple games together online — the number of people playing FarmVille exceeds the size of the entire user base of Twitter — or discussing single player games on bulletin boards, has become  as much a part of the experience as the actual play.

Juul, being a proper academic, uses survey data, sales data, historical research, and personal interviews with both players and developers, along with his own history as a gamer, to flesh out his description of this moment when video games went mainstream. And while aware that there are folks who view the rise of casual games as the end of gaming as it was intended to be, Juul simply shares his observations about what appears to be happening. A Casual Revolution is a reflection on a moment, not a diatribe or a eulogy.

As someone who has spent many happy hours exploring the worlds conjured up by this world’s game developers, I found bittersweet comfort in Juul’s admission that he no longer has the time to play the kinds of games that made him a gamer. Same here. Confronted with a new game that couples steep PC hardware requirements with a quirky, one-of-a-kind control scheme and little in the way of juiciness, a game of the sort that once might have had my eager attention, today I have to say, I’ll pass. (I’ll always remember the time we spent together, System Shock.) Or, for that matter, confronted with a game that features simple button mashing but which requires the purchase of, say, an Xbox 360 or a PS3, I’ll pass. (I’m looking at both of you, Halo Reach and Heavy Rain.)

What Juul has captured is the journey that many gamers of a certain age have taken. Those of us who were there when it all began now find ourselves wanting to experience, as much as possible with the lives we lead today, the joy of play that attracted us to games in the first place. For some, that means casual games. For others, well, here is a particularly good piece on how aging changes gaming.

Perhaps in his next book, Juul will examine what effect a world where games are mainstream is having on those who have never known anything else. Perhaps. Or would that be as futile as asking fish their opinion of water?

Send an email to the author of this review at mrlipid@tap-repeatedly.com.

8 Responses to A Casual Revolution