“Kill with skill,” advises Bulletstorm’s ad copy. That rhymes so it makes a nice tagline. “Kill as brutally and hideously as you possibly can within only the loosest confines of physics” doesn’t roll off the tongue as easily.

Bulletstorm is exactly what it wants to be: a zany, foulmouthed, crass, absurdly violent fiesta of carnage. And everything about it appears crafted to suit this. Polish developer People Can Fly, working with Epic, have brought their considerable talents for atmosphere, outlandishness, and gleefully gory over-the-topism to bear yet again in a game that really does kind of remind us that “mindless” is not only sometimes a good thing, it can actually be a personality trait.

Soldiers who kill people discover that they’re being used by their superior and quit, stealing a space ship and lurking in the “Side Systems,” where it’s lawless and crappy. The drunken lout in command is named Grayson Hunt, and he’s a douchebag of the highest order: stupid, dirty, horny, brutal, and drunk 98% of the time. He, along with his disgraced unit, they… they sort of wander space and fuck about, I guess. The game opens with Grayson and his executive officer drunkenly trying to shoot an empty moonshine bottle off a living captive’s head. When that ends badly they stumble up to the bridge complaining that they’re out of booze (“but we do have some paint thinner!” says his second). And because Grayson is drunk, he decides to attack a huge battlecruiser on which his foe and former commanding officer resides. And then both ships crash into a planet that could only have sprung from the mind of a team of crazed Poles with dynamite imaginations and spectacularly childish senses of humor. From there it’s a madcap race to hijack a rescue pod, and the only thing between you and it are about ten million screaming, slavering barbarians, mutants, dinosaurs, evil plants and other fucked-up stuff.

When you’re dealing with a game called Bulletstorm, I think it’s not unreasonable to assume certain things, to take them as given. There will probably not be bunnies. It’s probably not for the kids. It might make you rape people.

But it’s fun. It’s sort of purified fun. If enjoyment were Kool-Aid® Brand Soft Drink™, then Bulletstorm is the Kool-Aid® flavor packet. The other ingredients of Kool-Aid® are non-proprietary; water, sugar, ice. But without the flavor packet there can be no Kool-Aid®.

The Skillshot system from which the game takes its ad copy is one of the many fairly unique innovations hiding under Bulletstorm’s ferociously juvenile surface. Simply? The more creatively you kill, the more points you get. And you need points to upgrade your weapons, buy new ones, and to purchase ammunition. Another thing you can probably take as a given when the game’s title is Bulletstorm is that there will be a lot of bullets used, and you’ll need guns to shoot them and a way to get more. And while you get a paltry 10 or 25 points for a regular old kill, you can get a hundred or more if you, say, set a guy on fire and then kill him while he’s burning. That’s the AFTERBURNER skillshot. Or if you use the game’s quad-barreled shotgun to take an enemy’s torso clean off. That’s the TOPLESS skillshot. Or if you slam an enemy into a cactus. That’s the PRICKED skillshot. Or if you take out an enemy’s legs and then kill him while he’s down. I can’t remember what that one’s called, but it’s in there. 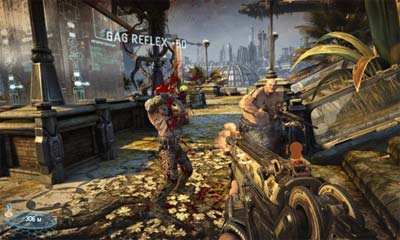 You do not want to know.

In fact there are 145 unique skillshots, and they represent the core of the game. The story is ridiculous (but often hilarious, though again, only if you like obsessively juvenile toilet humor). As you harm enemies, time slows down for them, but not for you – making it comparatively easy to pull off many skillshots. For example, it’s a trivial thing to shoot a guy in the nuts and then curb-stomp him as he writhes on the ground in agony for the MERCY skillshot, or to blast him off a cliff for the VERTIGO skillshot, or to shove a grenade up his ass and then blast him off a cliff for the SADIST skillshot. You just gotta be creative.

The game jubilantly racks up each and every shot and point, egging you on to ever more inventive methods of murder. There’s actually a story element built into this – Grayson’s using a stolen device that keeps real-time records of his lethality – but you don’t really need it. Realism and suspension of disbelief are out the window in the raucous, shamelessly obscene game.

What People Can Fly seem so good at, aside from general shooter design, is massive set-piece moments. You may remember the enormous bosses in Painkiller. That scale and scope make a return here, powered this time by the most optimized, most up-to-date, most beautiful Unreal 3 engine I’ve seen. This is the same rev that will be powering Gears of War 3 come September, and it’s a real treat to see how much they’ve improved the already wildly impressive engine since its release.

I will say that you’re going to pay a price for the beauty in Bulletstorm’s frame rates, which sometimes struggle to stay above 20 on my middle-aged rig. Those with slower machines might prefer the 360 or PS3 versions, and the controls work just fine on both those platforms, so no real worries there.

These boots were also made for walkin.

The three big drawbacks with the PC version are pretty common: first, because this game is a console port, there’s a marked dearth of graphics options to tweak. You get resolution and a handful of low-med-high choices, plus anti-aliasing, but you’re not going to see the visual control granularity of a STALKER here. The same goes for game options – you’ve got the basics of mouse management and key mapping, but nothing robust.

Second, Games for Windows Live. It’s a pain in the ass. Nuff said.

Third, again because it’s a console port, you can’t save wherever you want; Bulletstorm uses checkpoints. It uses them well, I’ll be first to admit – you can barely swing a cat without hitting a checkpoint – but it does use them, and you will find yourself repeating small sections of the game because you got yourself killed out of exuberance.

It has Something to do with Math