As those who tap the forums already know, I had LASIK a couple of weeks ago. It’s kind of an amazing procedure. Totally painless, though you do feel… something, something unpleasant, but “pain” is the wrong word. It’s more like you’re aware of being sharply uncomfortable for a few seconds. Admittedly the smell of your own burning eye flesh is disconcerting, but it doesn’t hurt.

For the next eight hours after surgery, though, your eyeballs feel like they’re being rolled in a slurry of sand and lemon juice. A great, noble, self-sacrificing friend of mine took me to the surgery, then took me home, then narrated a game of Civilization V to me (I’d been told not to open my eyes) while I fidgeted and growled and pawed at my liberally running eyes as they lay protected beneath the silly plastic shields they’d made me wear.

Next day I could see. My eyes itched a little, like having slightly dry contacts in, but I could read license plates down in the parking lot from my condo’s balcony, and looking through my old glasses was like putting cotton in front of my eyes. We’ll call that Day One. Best vision ever. Day Two, pretty much the same. Day Three was Thanksgiving and I was so bloated on food and booze that I couldn’t really see anyway, though I was able to find the pumpkin pie. 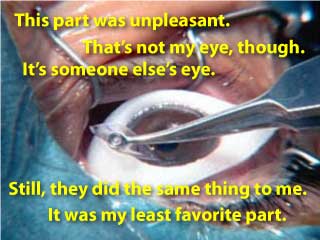 Day Four things started going downhill, and they’ve been on a slippery slide ever since. Turns out a reaction to the anti-inflammatory steroid eyedrops has caused the pressure in my eyeballs to rise like a billion times higher than it is supposed to be. Today at the surgeon’s office, they gave me new drops to reduce the pressure. This was an immense relief to me, not because I was in pain or anything, but because the way they were going on about the pressure in my eyes, I thought the things were about to burst right out of my head and splatter across the far wall, or that they’d use giant needles to slurp out the extra eye juice or something. Just drops though.

This isn’t some argument against LASIK; nothing like that. I’m sure that they’ll get this problem sorted out and my vision will be excellent. If they don’t, I’ll soon be so god damned rich that I’ll be able to buy other people to BE my eyes. I won’t even keep their bodies, I’ll just take their eyes and carry them around in a big sack.

I always wondered what the elephant was doing during this process. They are ornery creatures and I can’t see one (literally right now, but figuratively in this argument) standing there patiently while three blind dudes feel it up.

Beloved, venerated game designer Warren Spector surprised me today. Spector has been so long in this industry, and knows it so well, that I’d never have expected this from him: he fell back on the very last, most desperate response to bad press and said “critics don’t understand” his latest work, Epic Mickey for the Wii. Warren, Warren, Warren.

Dude, I will buy any game you work on (except this one, because I don’t have a Wii), but if it’s poorly received don’t group yourself in with the Hydrophobia developers of the world and accuse critics of misunderstanding. Critics are paid to understand. Don’t fall back on the old “keyboard and opinion” argument. Like you, Warren, most serious critics have forgotten more about games than most people will ever know. You’re a fucking genius. I could talk to you for hours. I have talked to you for hours. Discussing games and the industry with you is like geek heaven, without the shame. Gaming needs you, and if Epic Mickey is suffering a little in the ratings, don’t use the “it’s misunderstood” chestnut. Especially don’t do it when all critics are complaining about the same thing: a bad camera.

In games, a camera is a device that allows us to see. We depend on it. If the camera is bad, if we can’t see what we need to see, we can’t play the way we want to. And yet despite this, “bad camera” is among the most common complaints leveled at games.

Since I am currently practically blind, I find myself especially sensitive to that criticism. It’s sad to me that Epic Mickey has stumbled for such a pedestrian reason. I could have told you it wouldn’t sell (I’m wrong about some things, but this one I was sure on). It’s a Disney game starring Mickey Mouse. The addition of Warren Spector and his team at Junction Point mean that it’s very still water that runs very deep, very deep indeed – but people will see it as a Mickey Mouse game. But even knowing that I’d have encouraged its production. Warren Spector loves old cartoons; he did his Master’s thesis on them. And from what I hear, the game does a great job of weaving together a truly dark story about forgotten things and cherished memories, without actually un-Disneyfying it to the point that the overlord corporation would hit the brakes. So the fact that a sluggish camera is putting Epic Mickey in the hurt locker just isn’t fair. I wish it were possible to struggle past that bad camera and see the decision points, the moral quandaries, the characterization of the classic hero that’s been so lovingly crafted into the game.

But you can’t. A video game is an elephant, not a trunk, a leg, and a whatever. It’s something that you need to see, see the whole of, to recognize. Even those who wind up loving Epic Mickey for its Warren Spectorness (and remember, I haven’t played it, I’m going on reviews and what I know of the developer) will still have to acknowledge that it’s an imperfect elephant. If we could touch a video game and feel only the trunk, or only the leg, perhaps we could overlook such things. But more than any other medium, this is one elephant where you can’t be blind to any part.

26 Responses to It’s an Elephant