1UP and others report that the PS3 and PSP will soon get Neo Geo Station, a downloadable emulator for that venerable platform.

I gotta stroll down Memory Lane for a moment here.

First, quick facts for our uninitiated readers (hi Mom!) – the Neo Geo was a home gaming system that came out in the same neighborhood as the Sega Genesis/Mega Drive and the Super Nintendo. It was always considered the odd man out, and never really intended to compete with those systems. Indeed, Neo Geo really existed in a class of its own. Originally priced at $650, with game cartridges costing a solid $100 each, it was never destined to dominate homes. 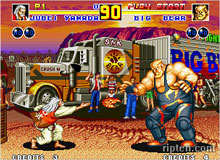 Nor was it meant to. Developed by SNK, the console’s true purpose was to bring specific arcade games home, with duplicate graphics (something the Genesis and Super Nin still couldn’t do; arcades were in decline at this point but their massive cabinets had more room for more power, meaning better graphics). Anyway, the Neo Geo did as expected and later evolved into the core of many actual arcade cabinets: arcade owners and home enthusiasts could simply swap out cartridges rather than go through the trouble of replacing ROM boards or entire cabinets. The Neo Geo (and SNK) was known for 2d scrollers and brawlers along the lines of Metal Slug and Fatal Fury (this was also the age of Street Fighter and Mortal Kombat).

This may come as a surprise to some of you, but as a young lad and even as a teen, Steerpike was a bit of a video game nut. It’s one of the many reasons he was so popular with the ladies and so well-liked at school. Living in an imaginary, if pixelated, world had its benefits; the drawback was that responsible parents and personal poverty (you make limited funds bagging groceries) prevented me from owning everything at all times.

I would go to the mall and ask to look at Neo Geo cartridge boxes at random. They were kept behind the counter, because at that price they were surely a target for theft, but since each box was the size of a Trapper Keeper I don’t see anyone shoving King of Fighters down their pants. But still.

I would marvel at the graphics, of course, and mostly marvel at the prices. One hundred dollars a game?! Even then my tiny brain was beginning to think in terms of business, and I distinctly recall sensing that the Neo Geo would never survive at such a price point. Still, though, I loved to go into stores and ask to look at the boxes. It was like holding something not forbidden but unattainable; something I desired but that was simply better than me. It was as if Babbage’s and Electronics Boutique kept copies of Scarlett Johannsson behind their wrap counters, and people could hold them and look at them, knowing they’d never be truly reachable.

The funniest thing is that if by some stroke of providence I’d received a Neo Geo, I’d have hated the thing. It was built as a showcase for SNK’s games, and SNK’s games were a parade of 2D brawlers and Contra-esque shooters: just about my two least favorite types of games. No RPGs, no good platformers. And in fairness to my juvenile self, I didn’t exactly want a Neo Geo. I just liked to look at it, and wonder.

This seems relevant to me as I contemplate the small mountain of computer parts I’m sorting through. I see a Diamond FirePort 40 – a PCI SCSI adapter that I bought at great personal anguish for $300 in, like, 1998. The anguish was on account of I didn’t have the money for it and didn’t need it, but I wanted SCSI for some reason. No one uses SCSI any more and most PCs don’t even have a PCI slot. I see a Radeon 9700 Pro – a special edition card that originally shipped only with Alienware computers, at the time worth about $400; currently worthless. Sticks of RAM clatter down the sides of my mountain like crumbling slate – dozens, hundreds, each hard bought and unlabeled. I don’t even know what most of them would fit in any more.

It’s amazing how the things we treasure lose value over time. I suppose someone could make an argument that this is a lesson about how we should treasure things of real value, like other people, but I hate people. And I hate the people who like people; especially people who like people and proselytize liking people as some path to spiritual enlightenment and a divorce from material obsession. Those people would benefit from a good tactical shotgun blast up the ass. How’s that for material, motherfucker?

Soon the unattainable Neo Geo will be available emulated on PS3 and PSP. PSP! A handheld system! The games, once $100 apiece, will apparently sell for about ten bucks. Hell, GameTap has had Neo Geo emulation and several games for years now. Doesn’t it make you wonder about how the value of things change over time? That FirePort was the king of all SCSI cards, and demanded a $300 investment (not to mention the drives). Here’s one overpriced at $19. Has so much changed in the intervening years?

From the little boy swooning over Neo Geo boxes to the grown man able to afford nearly every sensible gaming investment that he may want, the lesson never quite dies in my mind. Oh yes, I think. I want this video card. It is the New Hotness. I know in three years I’ll turn on it, call it a dinosaur, and throw it in the pile. I won’t even try to sell it because it will be worthless. The remarkable thing is that knowing it will one day become worthless doesn’t really diminish its worth in the now. The truth, of course, is that everything is worthless. In the universe’s eyes, we and everything we’ve built are nothing more than a squandering of otherwise useful atoms.

And meanwhile, the mountain grows. But I don’t let it dissuade me. Some think of time as a river, flowing swift and true in one direction. But what if time is an ocean in a storm? In that case we’ve got to enjoy what we can while we can. So for those who bought a Neo Geo at $650, don’t feel ashamed. Sure, if you’d waited 20 years it would have been cheaper. But by the time 20 years have passed, there’re new and more delicious things to move on to.

6 Responses to Yesterday Seems So Far Away