I struck out pretty much as early as possible today to take in Disney’s latest, Wreck-It Ralph, partially because I was excited and partially because I wanted to get there before schools got out and the weekend commenced.  I thought I’d do a little review, and also consider how the movie, which features an uncountable number of video game character cameos, fits into our recent troubles of game culture perception.  Because, you know, that’s kinda what we do here, and I, for one, wouldn’t mind a little not-terrible news out of the gaming periphery.

I shall endeavor to keep the spoilers to a minimum, but there might be a few.

Chances are you’ve seen the trailers.  When the first one hit, somewhat out of the blue, and clearly showed lots of licensed characters, Disney practically won the internet.  I suppose once your company has explored the inner lives of toys and cars, video game characters aren’t much of a leap.

Ralph and the other characters that inhabit his world exist in various arcade machines at what might possibly be the last arcade on Earth.  By day they play their parts in their games, with the children at the controls leering in at them through a big window in the sky; once the arcade closes, they make like Woody and Buzz and go on with their lives, traveling to other dormant games through the surge protector to do things like attend Villains Anonymous meetings.  The key delight in this movie is seeing how this world works, the little nuances, the clever extrapolations.  The film’s script doesn’t do its world justice, not nearly.

But anyway.  You can find plenty of film people to go into what does and doesn’t work in Wreck-It Ralph as a movie.  Let’s talk about how it does as a piece of game culture.

I doubt I need to tell anyone reading this that the relationship between video games and movies has been rocky at best.  Whether we’re talking about film adaptations of a game or films in which games or gaming play a role, usually the entire gaming side of the equation comes out looking pretty poor.  There’s a certain charm, I suppose, to the game-oriented movies that released in the very formative years of the medium: the apocalyptic visions of WarGames, the strangely prescient campiness of The Last Starfighter, the blatant commercialism of The Wizard.  More recently, games have been less a plot convenience and more the subject of a message (or an attempt at one), like in 2009’s Gamer, where MMOs have basically become blood sport.  And that’s not even to mention the countless movies that have nothing really to do with games, but casually toss a game or two in there as a quick way to say, “This character’s a bum” or “This guy doesn’t have a girlfriend.”  Looking back, I have a hard time finding much in the way of bright points (or even moderately dim points), save for, perhaps, 2007’s Reign Over Me, which really wasn’t about video games but prominently included Shadow of the Colossus as both coping mechanism and metaphor, as a positive force in the life of Adam Sandler’s broken character.

Needless to say, Wreck-It Ralph doesn’t insist that video games will make everybody kill everybody, or engage them as a particular metaphor; no, here, the games are a backdrop, a setting, but one that seems (fairly) lovingly crafted.  The trailers promise plenty of cameos from actual game characters, not vague clones of them, and such cameos are legion (though none of them play a huge role in the film).  Some of the film’s smarter humor pokes at games or game concepts in the somewhat affectionate fashion of a good spoof, when you feel that the writers are laughing with gamers, not at them.  Little Easter eggs, whether the numerous characters visible in the background of various scenes like some kind of fanboyish Where’s Waldo? or the inclusion of certain slightly more obscure game culture references, like a blatant (but clever) inclusion of the Konami code, feel sincere, too informed, generally, to be put there by someone who did a cursory Google search for some hip jargon all the kids are using these days.  And, of course, it’s not just new games, or old games, but many games across generations: Q*bert is one of the most heavily used licensed characters.  Jane Lynch’s character, the tough-talking Sergeant Calhoun from one of the newest games in the arcade, the grim sci-fi light gun shooter Hero’s Duty, is the stand-in for the antihero so common in modern games: she has “the most tragic backstory ever,” after all.  (And, whether by accident or design, she’s about as well-rendered, overall, as the average female character in modern action games – which is to say, not very.) 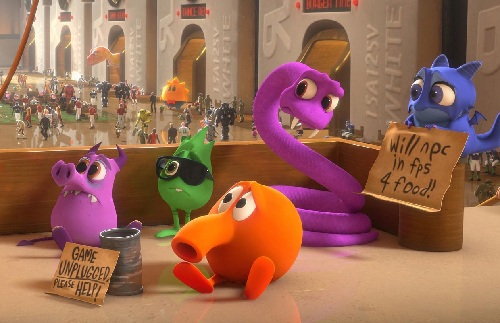 Please, think of the…what the heck is Q*bert, anyway?

Many people the movie draws in with this sort of thing will likely be a bit disappointed with the long stretches without it, or the fact that the third act takes place pretty much entirely in the kart racer Sugar Rush, where Sarah Silverman’s delightfully-named Venellope (pronounced as a portmanteau of “vanilla” and “Penelope”) lives.  There’s still the occasional call-out to kart racing tropes, like floating boxes on the track that grant power-ups, and various implausible hazards, but largely, at this point, the movie’s focused on its story.  Whether by accident or design (I find this phrase popping up repeatedly in my mind as I consider this movie), the frequent product placement – of real snack food products – in Sugar Rush‘s world feels not quite entirely unlike the dozens of game character cameos on the face of it, but in retrospect the candy and pastries were largely the butt of (bad) puns and seemed like, well, product placement, in a way that the game-related material never does.

And I guess that’s really the thing, isn’t it?  This isn’t a movie that points and laughs or tries overly hard to get the entire audience in on every joke.  There’s no slapped together “highest score in every MMO” talk, or much consideration at all for what the characters think of “the gamers”, who they bring up in conversation only every so often, and usually in the same way one might talk about an audience or a client.  Game culture really isn’t under scrutiny here, it’s a part of the equation, something that Wreck-It Ralph invites you to enjoy being a part of (if you are), but probably isn’t going to dramatically alter your notions about it one way or the other (if you’re not). 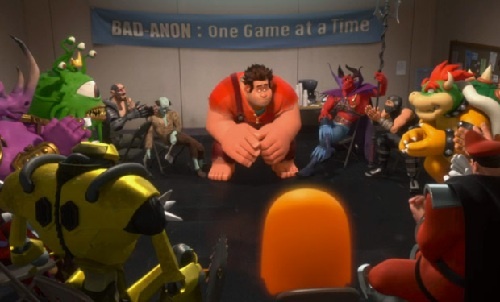 One game (movie) at a time.

In the end I don’t know for sure how I feel about that.  There’s definitely a sense of relief in something so relatively mainstream demonstrating not only an actual familiarity with, but affection for, this medium.  I’m far too used to video games only popping up to tell you who the violent antisocial kids are or to give the nerdy character some punchline that amounts to, “Oh, look what a nerd she is!”  It’s like the kind of approach that proliferates in little YouTube videos and webcomics across the internet.  But I don’t think I’d exactly call Wreck-It Ralph a celebration of video games either.  It doesn’t really engage the experience of playing or the kind of wonderment that games can offer; for the characters, these things aren’t play, and often they aren’t strange.  These things are just part of the world they have to fit into, one way or the other.

There’s a message throughout about being yourself, finding your niche, realizing that you aren’t just your job or what other people see; one could, were they so inclined, juxtapose that with the game theme into some sort of commentary.  I think that might be a stretch.  For whatever it does wrong, I came away from Wreck-It Ralph with the impression that, perhaps at last, here’s a movie where video games are just a thing in it, not a message, not an omen, not an ominous wave devouring and destroying our youth.  Video games just…are.  I’m pretty satisfied with that.

Insert coin to e-mail the author at dix@tap-repeatedly.com.