Though at this point Tap – a multi-national organization – has fewer active American writers than it does those from far-flung realms, we’d nonetheless like to take a moment and wish all our readers a very happy Thanksgiving Thursday. For the majority of the world, it is just a normal day. But it’s the day Americans congregate with relatives they largely despise, consume poorly-prepared turkey with a slurry of bread and spices shoved up its ass, get drunk, then fall asleep on the sofa before waking and stumbling into the kitchen to make and consume sandwiches from what remains of the dessicated bird carcass.

An interesting new trend observed during this day of celebration (we’re celebrating our pioneer ancestors’ survival of New England’s bitter winter on account of help from Natives we would later slaughter to a man) is the “Turduckhen,” which takes all the dry, flavorless appeal of a turkey and  runs with it. Big time.

Remember above how I mentioned the bread and spices in the turkey’s ass? This is called “stuffing,” on account of being “stuffed” up the turkey. 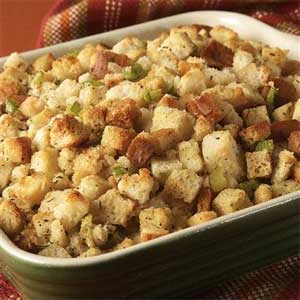 Once the animal has been cooked to a crispy-on-the-outside, dry-as-sawdust-on-the-inside consistency, this “stuffing” is removed and put in a pan. Wise families then bake it further, because “stuffing” never cooks thoroughly inside the turkey and is an excellent source of food poisoning (which shouldn’t be surprising; Turkey Ass Bread frankly sounds unsanitary). In either case it’s then served alongside the turkey; along with a cylinder of cranberry-flavored gelatin in the shape of the can it came in; a revolting combination of green beans, dried onions, and cream of mushroom soup; and pumpkin pie, which is delicious.

Anyway, “stuffing,” Americans have realized, is not the only substance one can stuff into a turkey. The sky’s the limit. See, a turkey’s a pretty big animal. We’re talking 18-30lbs, and that’s after they’ve been beheaded, plucked, and eviscerated. With that in mind there’s a fair amount of square footage inside a turkey – where its innards used to be – space that could be filled with all manner of fascinating objects and substances.

Thus did some enterprising soul take a turkey and ram a duck into it.

And since cornholing a turkey with a duck is insufficiently ambitious, this visionary chef then took a Cornish hen and shoved that into the duck. Result? A Turduckhen: 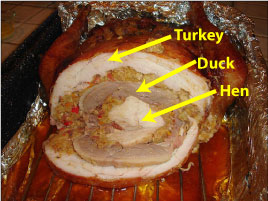 You’ll note, if you look carefully, that they still managed to get some stuffing between each of the layers, like insulation. I am confident that, given time, someone will invent the Turduckhenquail, leading inevitably to a sort of culinary arms race in which ever smaller consumables are inserted into the turkey shell, until we reach the most infinitesimal possible food. 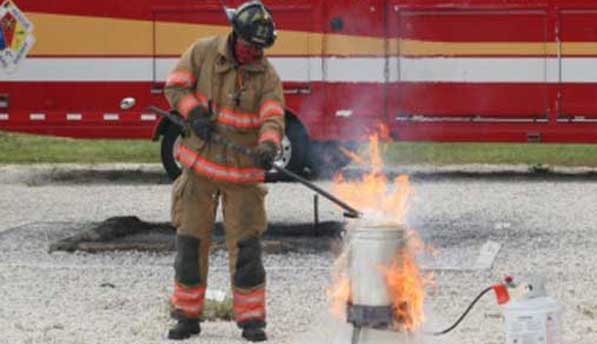