A Chance at Karmic Reclamation 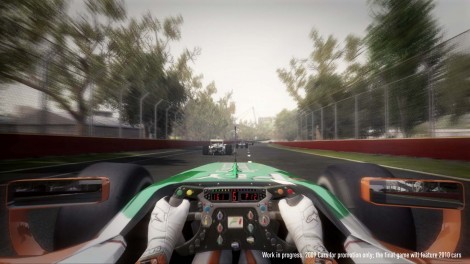 No shooting,  maiming, or blowing things to bits. No beating anything to death with a shoehorn and arms will not be used for bludgeoning.

Codemasters is releasing  F1-2010 on 22-September for all the major platforms (PS3, XBox 360, PC, Wii, PSP, Mac) which is in itself notable coverage and must have taken forever to get working. While there have been mods for F1 in rFactor, this is the first major purely F1 branded product since EA in 2002 and it contains all the 2010 teams and drivers.

There are a gazillion demo clips on YouTube, frankly none of which are all that gripping but their work in Dirt 2 was solid and well received and given that product I would expect this one to be  more simulation than arcade style although the exact balance remains to be seen. Modern F1 simulation is a difficult prospect for developers with realism being too hard for most people and arcade action being so far removed from reality as to be unconvincing. In any event, this should be a good thing for repeatedly cranking out the laps with no latent evil intent. My take is that a morning of F1 Zen goodness should just about balance out an afternoon of carpet bombing.

6 Responses to A Chance at Karmic Reclamation

The Last of Us Part II: Hateful. Brutal. Beautiful?