According to the ESA’s most recent fact sheet, women currently make up 45% of game players.

This isn’t really news. The stats about the increasing amount of female gamers have been available for years. But the common wisdom is that women are mostly interested in games on Facebook: casual games for which they are unwilling to pay actual money without being deceived by free-to-play monetization tactics. However, one company, Silicon Sisters, has been working on games targeted at young girls and sold with a money up-front model… and succeeding at it. Now, they’re planning on doing the same with a game targeted squarely at the adult female demographic. Their new game is called Everlove, and it is an interactive romance novel for an American audience.

I’m a hardcore gamer, but I’m always a fan of the romance arcs in otherwise core-targeted gaming experiences. Like many ladies I was thrilled when Mass Effect 2 finally opened up the prospect of romancing Garrus. And no Fire Emblem NPC girl better step to my precious Chrom (the fact that I seem to be sharing him with legions of other female gamers notwithstanding). So even though, as a core gamer, I’m not the target audience for Everlove, I was nonetheless intrigued. Can the romance sim – a genre which seems to do well enough in Japan  – really find a home in English-speaking countries? Interactive novels aren’t entirely unheard of in the United States (or here on Tap-Repeatedly), but a purely romance-focused interactive story is rare, especially if it’s written for women.

Last week at Casual Connect I sat down with Silicon Sisters’ CEO Brenda Bailey Gershkovitch to find out more about this title. We ended up having a conversation not just about Everlove, but about the slowly changing nature of the games’ market.

In Everlove, the player (or, reader) controls the destiny of Rose, a woman from the modern era. Rose is a physician: a highly paid professional in New York City who seems to have it all together… except for her empty love life. Her therapist decides to try past-life regression therapy, offering Rose a glimpse into other relationships in her previous lives. This adds a time travel element to the game, meaning it can take place in a somewhat fictionalized historical setting while still seeming relevant to a modern-day woman. It also means that Rose’s journey fits neatly into a series, as she can possibly explore a new romance in every past life that she examines. 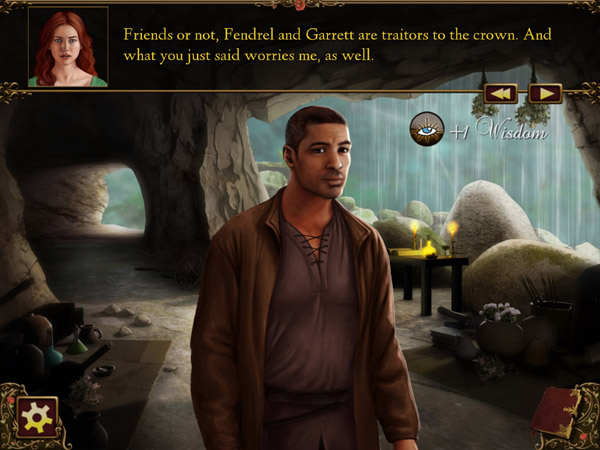 The game’s artwork, drawn from real people, is painterly and striking. Some male characters were drawn directly from the models, but Rose is a pastiche of a few different real-world women. The overall look is a soft, romance-novel-cover style, with handsome men and lush greenery in the backdrop.

“Our guys are beefcake – there’s no question about that,” said Bailey Gershkovitch. “But they have stories. They’re people. … For me as a gamer, I’d like to see the women in games written like that.”

Everlove’s story is penned by three different writers with different pedigrees: romance author Roxanne Snopek; Jess Hodgins, who was also the character artist on the game; and writer Tonia Laird who also worked on some of the dialogue in Bioware’s Dragon Age series. I found this last part particularly interesting, not just from the standpoint of having a AAA writer working on a “casual” title, but because romance was a huge part of the Dragon Age games and they have a strong appeal with women that I know.

In Everlove, the primary mode of interaction is through dialog trees. Choices made in conversations advance the story and explore Rose’s relationship with the different men in her past. Interacting with different men may reveal a red heart, which shows some compatibility, or a broken heart which shows that man is probably not right for you. During the demo, I was a bit too willful to make much headway with the regal Lord Blaxton, but, Bailey Gershkovitch assured me that was fine, since it just meant my personality might lead me down a different path.

“Depending on the character traits you exhibit,” she said, “you’re developing a personality profile, which we reveal to you at the end.” The game is highly replayable and exhibiting different personality traits will land the player with quite a different story… and possibly a different romantic partner, too. Maybe the Robin-Hood like rebel leader Garrett would’ve been a better match for me? 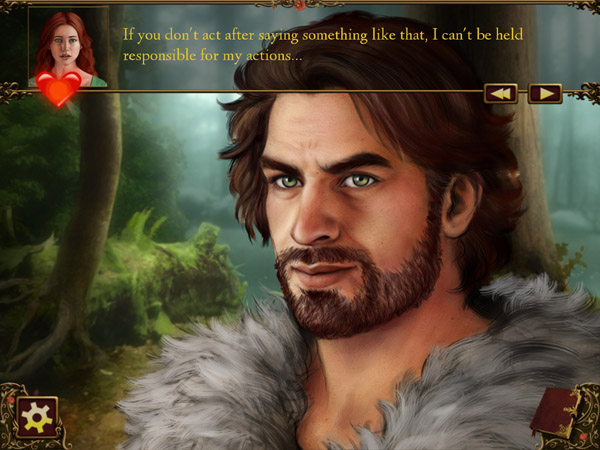 In medieval times Rose is now a healer, with knowledge of herbal remedies. “One of the things we’ve learned from researching women and what they want out of their interactive products is they like something that’s got real-world applications,” Bailey Gershkovitch said. So the gameplay in this chapter is broken up with a hidden-object style game where players learn about different real-world herbs with healing properties.

To reach that book-focused market, Everlove will be launching on all the major tablets: not just iPad, but Android Tablet, Kindle, and Nook as well. Silicon Sisters will promote the game through Barnes and Noble and Amazon. A second chapter of Rose’s story is in the works, and from there, the continuation of the series depends on the game’s initial success.

That success isn’t guaranteed… depending on who you talk to. The concept is solid, the game looks beautiful, and the demographics are well-researched. But Everlove retails for $3.99, and conventional wisdom says that Americans aren’t interested in “dating sims,” and women won’t pay that much for a tablet game. Is conventional wisdom right, or is this a risk worth taking?

“I’ve laid my money on it,”  Bailey Gershkovitch said. “I was very vindicated when George Lucas recently said: the next big thing in gaming is going to be a romance game for women.”

Why has nobody tried it before? “Publishers and funders are very risk-averse. I think you have to be completely devoted to making games for women to put your money on the line like this.”

“There used to be this idea,” she said, “that women shouldn’t play games because women aren’t good at the controller. Well, noobs aren’t good at the controller. The fact that many women are noobs is a correlation, not causation. … It’s just about exposure and time management. For us, trying to make it really accessible is addressing some of that.” 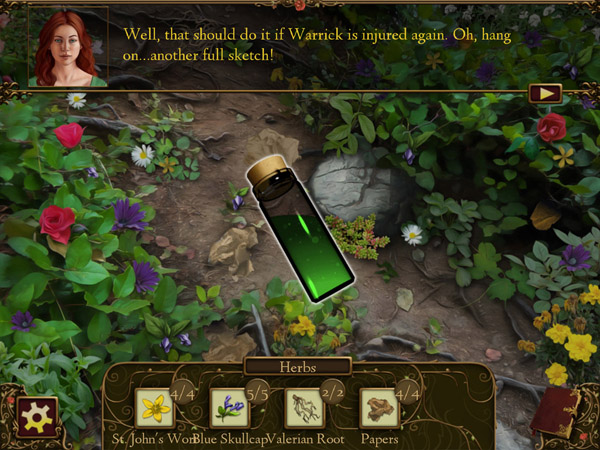 Bailey Gershkovitch said something interesting during our talk, which was “I know I’m going to get beaten up in the press.”  I wondered why she felt that way. Does the existence of a game like Everlove threaten something about what is established about video games?

Possibly. “… Look at what Jennifer Hepler went through at Bioware: the idea that we should be able to skip through the narrative, but, god forbid we skip over any of the violent gameplay.” Bailey Gershkovitch went on to say she really does identify as a gamer, and loves AAA games. “I’m a huge Lara Croft fan … I’m not trying to take anything away. I’m trying to add to the overall. It’s puzzling that people are threatened by that. I have so much respect for the people who work in this industry.”

And what if Silicon Sisters could make any AAA game they wanted? Bailey Gershkovitch didn’t hesitate to answer about her dreams: “I would love to be building on PS4. I would love to have a 20 million dollar budget and build a phenomenal game for women. This type of game, but very very deep immersion.” What would be her dream license? Again, no hesitation: The Hunger Games.

That would definitely be mischaracterizing the title. “It’s not Fifty Shades,” said Bailey Gershkovitch with good humor. “It’s pretty much a drug store romance.” The result of following a romance path to its logical conclusion is something that the developers are calling “a clinch scene,” a beautiful artwork showing a little beefcake. … Your imagination can do the rest. 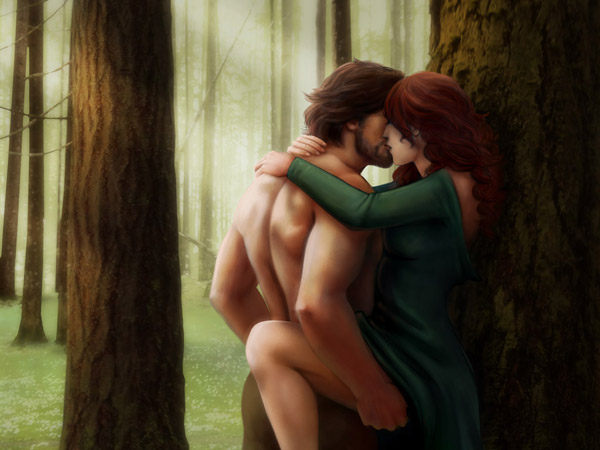 Everlove is due out later this month for tablet devices. Thanks to Brenda Bailey Gershkovitch for a fascinating conversation at Casual Connect!

11 Responses to Everlove: A Romance Game for Women